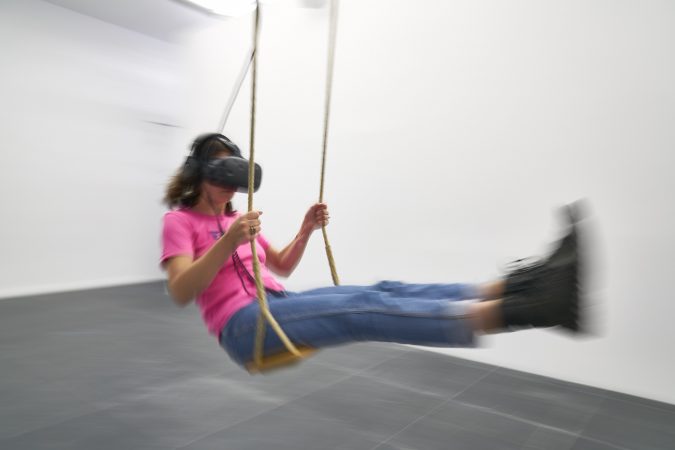 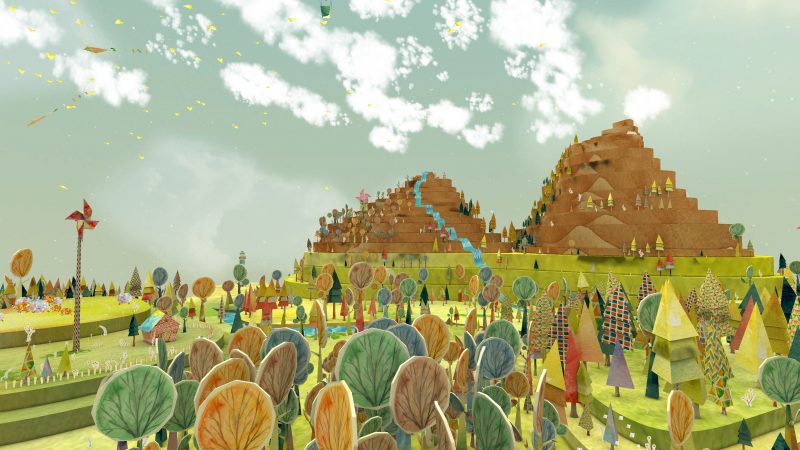 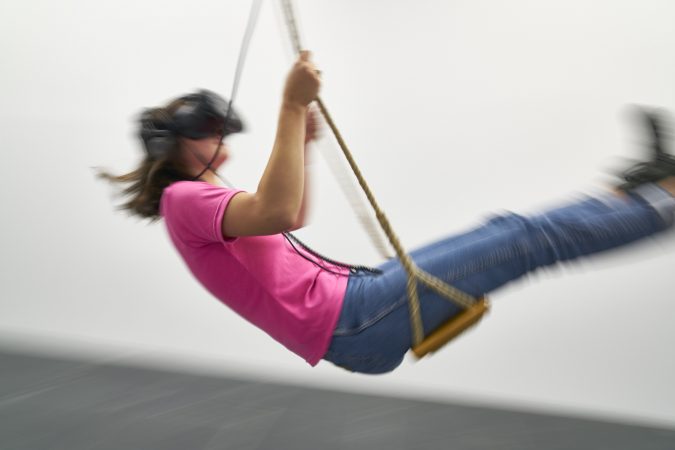 Near to Op de Beeck’s installation, one finds the work “Swing” by Christin Marczinzik (*1988) & Thi Binh Minh Nguyen (*1987). The VR installation uses a swing as the controller. Via VR glasses, the user can experience an artificial landscape far beyond the exhibition space’s restrictive walls. The use of one’s body determines the intensity of the virtual experience. The faster a user swings, the higher the view extends over a world of images that makes no claim to realism, but rather uses painted paper collages as an aesthetic metaphor. The VR installation plays with the intensification of the illusion via bodily perception and its deception. The sense of balance while swinging situates one’s body in space, though one’s visual perception is focussed on a visibly constructed world and is totally dissociated from the real environment. Synchronizing image and movement produces a plausible illusion despite its visual abstraction.

The swing as interface intensifies the bodily experience so that not only the sense of sight, but also one’s sense of balance is activated. The work intentionally uses the motif of the swing, which since ancient times has stood for the desire to overcome gravity and to disengage from the real world. Here, these associations culminate in an open metaphor for the possibilities of virtual reality.

Artist Christin Marczinzik (*1988) lives and works in Berlin. She studied Industrial Design at the Magdeburg-Stendal University in Magdeburg (DE), and the International University of Fine Arts in Poznan (PL). Thi Binh Minh Nguyen (*1987) lives and works in Halle (DE). She studied Game Design at the Zurich University of the Arts (ZHdK). Both artists studied Multimedia Design at the Burg Giebichenstein University of Art and Design in Halle, where they developed the VR application “Swing” together. Nguyen is part of the Silicon Valley-based Start Up “Meta AR” and develops design concepts and user interfaces for the prototype of an innovative augmented reality headset.