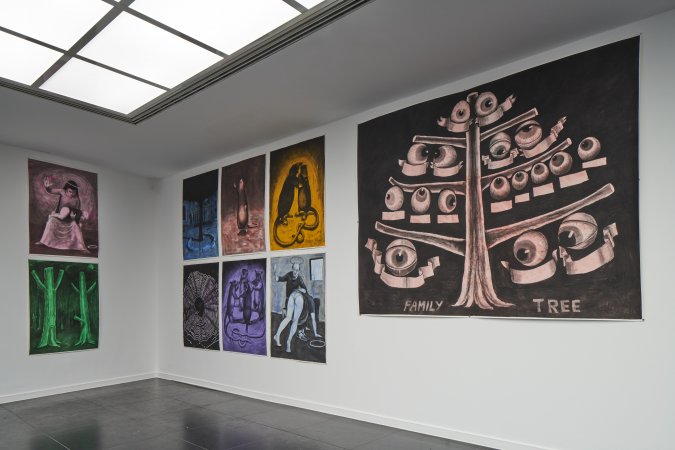 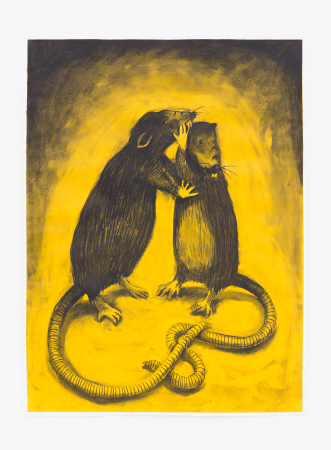 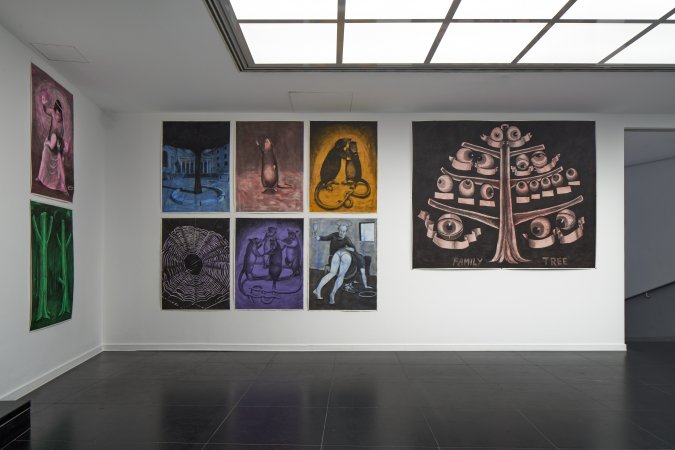 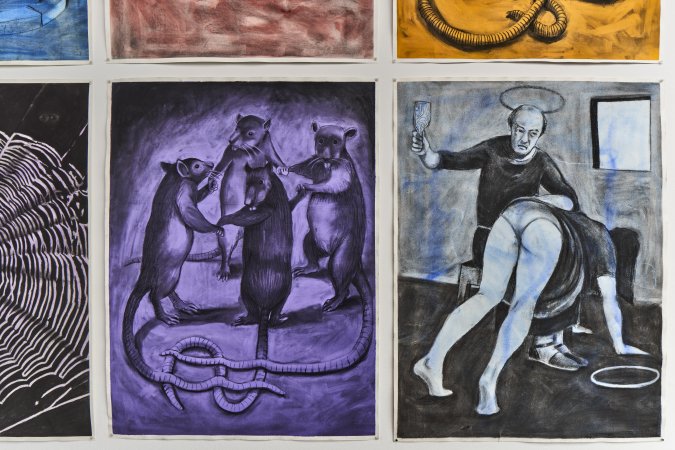 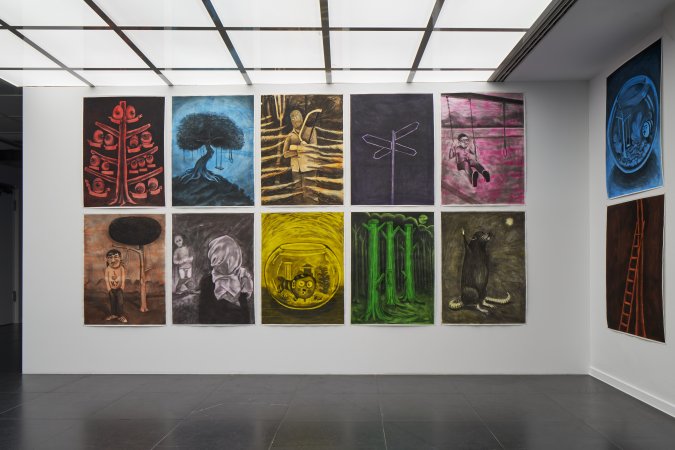 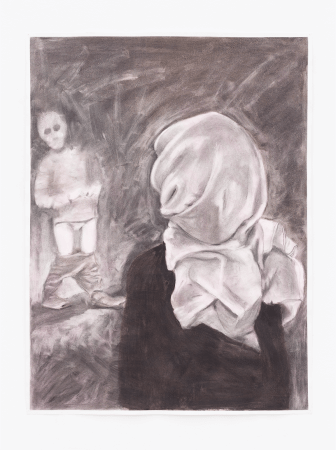 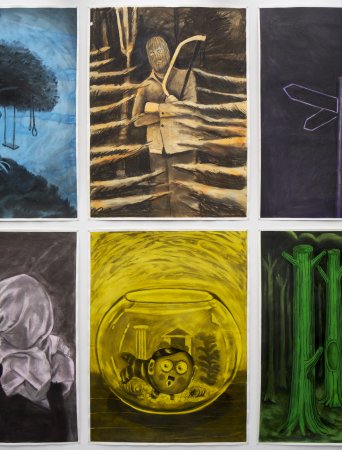 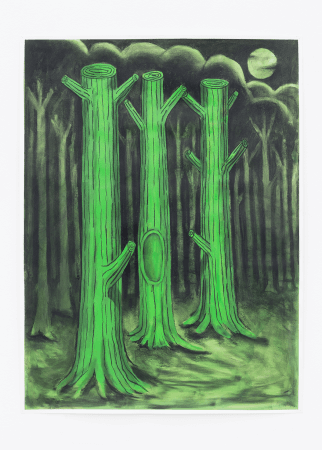 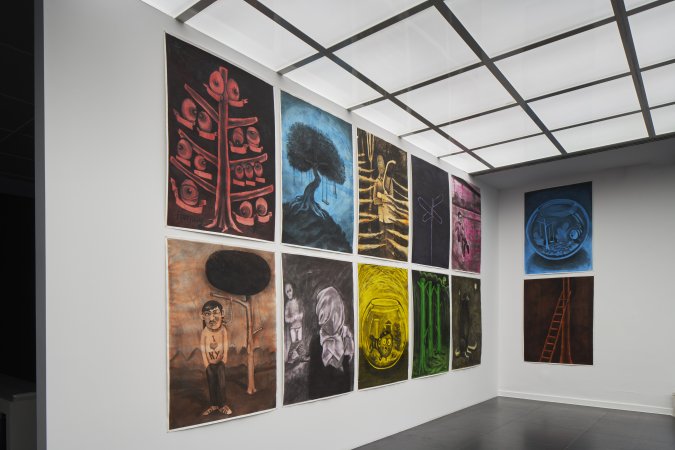 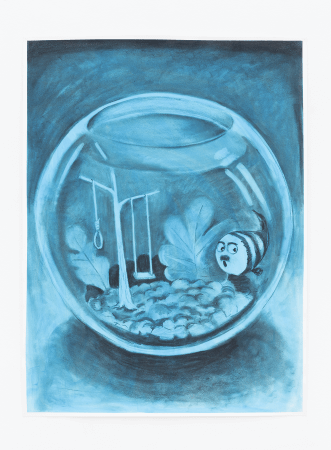 From left to right

The title of this series of drawings deliberately quotes the artist Carl Andre: ‘Art is what we do. Culture is what is done to us’. For Juan Pérez Agirregoikoa, culture is what is inflicted on us as a punishment, a system of values that shapes our way of seeing the world and traps us by conveying meaning, to condition us into submission. In these works, the artist questions a tradition that is both specific and shared, the culture on which Western societies are founded: values, ideas, customs, institutions, ideological superstructures such as one’s homeland and patriarchy, voracious capitalism, the family, romantic idealism, the Catholic religion. How can we re-educate ourselves? How to escape from an origin and an inheritance that determines destinies?

A genealogical tree of eyes that observe one other, suspicious, wary. The rats of capitalism gather in an endless dance, their tails forming dollar signs. Another rat sings, his right fist raised, the Cara al sol (Facing the sun), the hymn of the fascist movement Falange Española de las JONS, Following the Civil War (1936-1939), this became one of Franco’s official anthems and was sung in many Spanish schools up to the 1970s, almost. In the collective imagination, rats have always represented the lower instincts of human nature. They are images of the ambivalent, the ironic: restoring her humanity the Virgin Mary spanks the baby Jesus; the strange, with a forest of sexualised trees; the grotesque, when a Hitler-fish swims in an aquarium tank; the ominous, like the disturbing grandfather, both menacing and scared, wielding a handsaw; the shameful and disillusioning, where the individual is placed between a gallows and a swing, or a ladder too short for the purpose of reaching the sky.

These visual aphorisms each contain a title and a text that work as a counterpoint, resembling a fairy tale illustration, a fable, a popular Catalan story in pictures, or Francisco de Goya’s Caprichos, where the most important, personal and defining commentary is found underneath each engraving. Here, too, the titles of these drawings are sometimes as ambiguous as the subjects. They often allow a first literal interpretation and on a second reading these same words reveal other references that subvert the experience of contemplation.

Pérez Agirregoikoa uses elementary and unspectacular media that he handles with enormous, graphic efficiency: painting on paper, charcoal and watercolour, text, publications, banners with slapstick slogans such as the one that could be seen one summer afternoon over the sky of San Sebastián, the artist’s hometown: ‘Marx, I Love U. Will U Marry Me?’ More recently he has been making films that ironically stage dialogues of political philosophy. His work always focuses on the ability of visual and written language to question what kind of beings we are or allow ourselves to be. The psychoanalysis of Jacques Lacan, as well as his own reflections on how it is possible to make political art today, are diffuse yet constant elements present in his work.