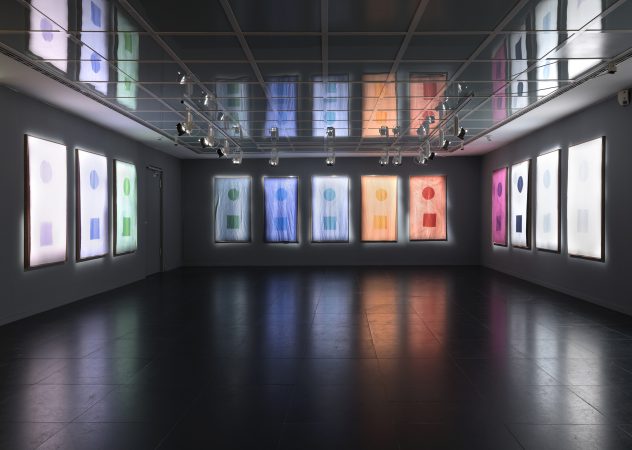 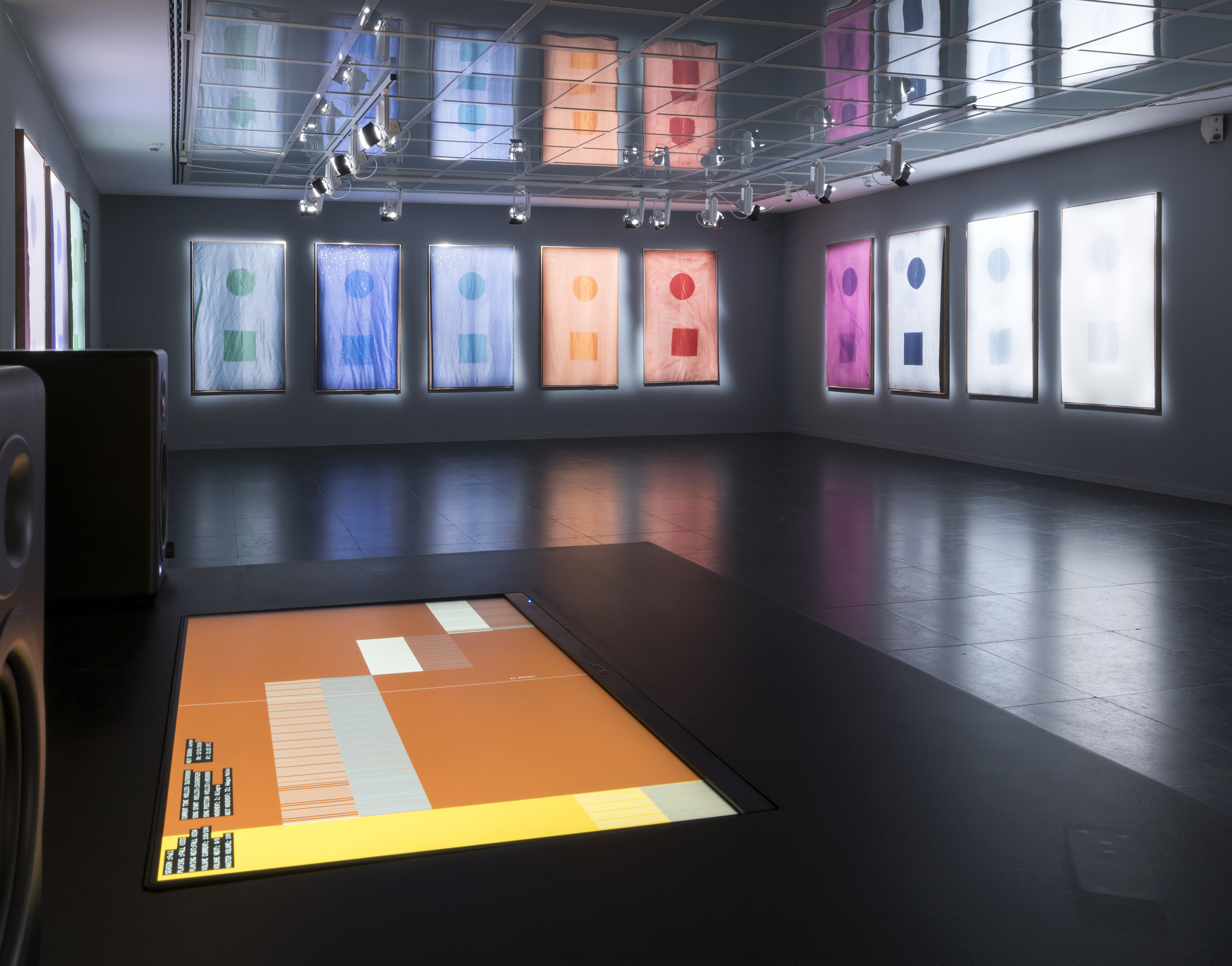 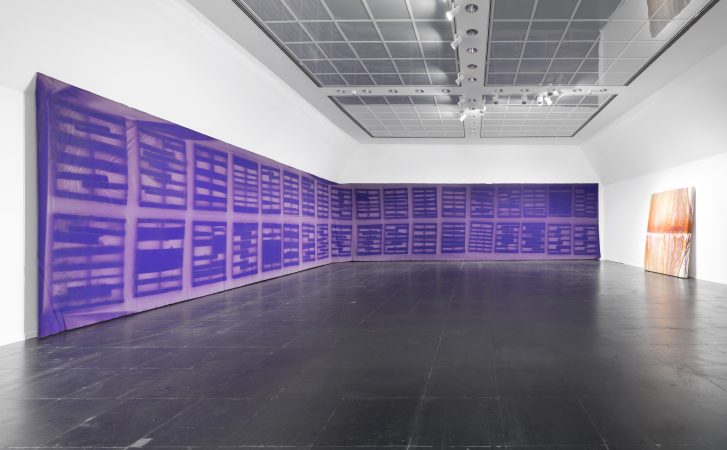 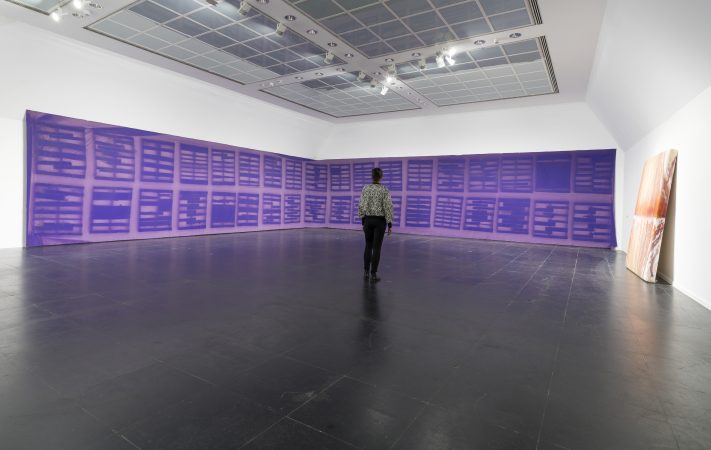 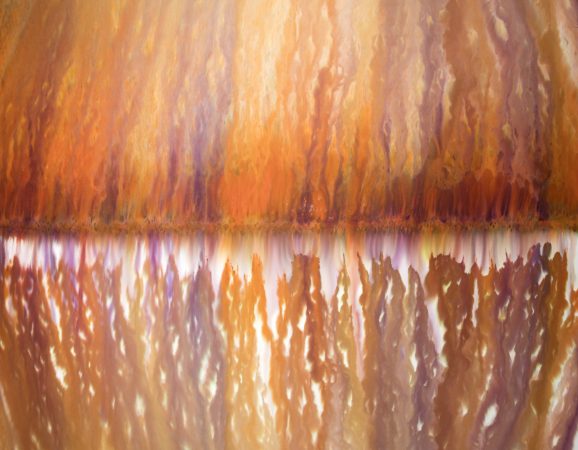 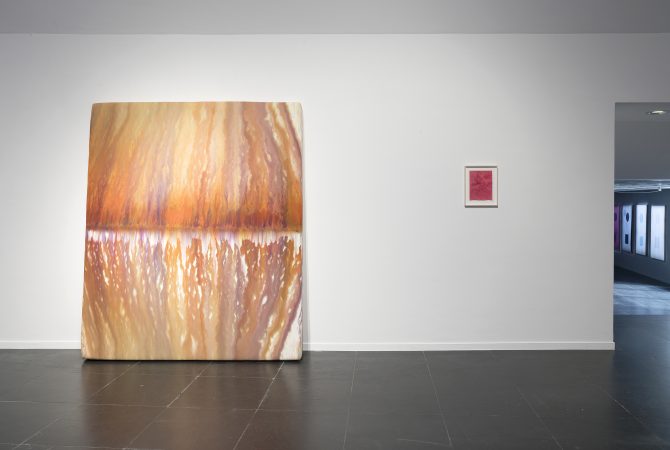 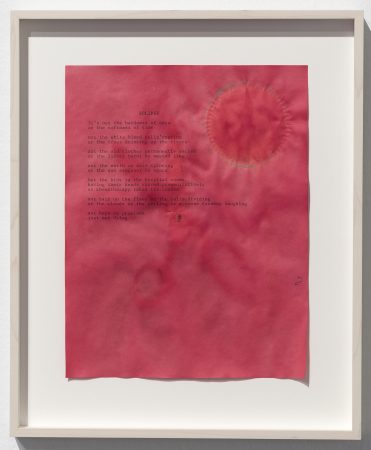 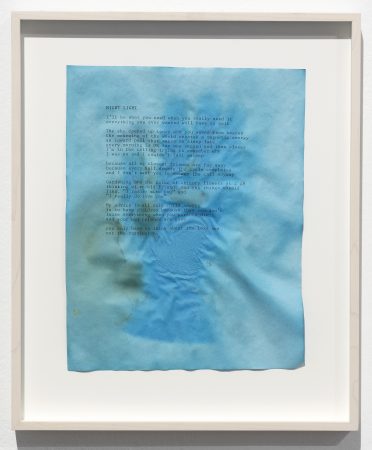 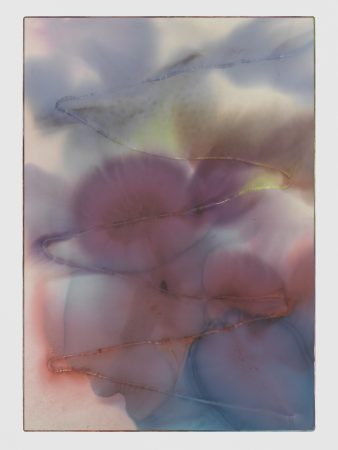 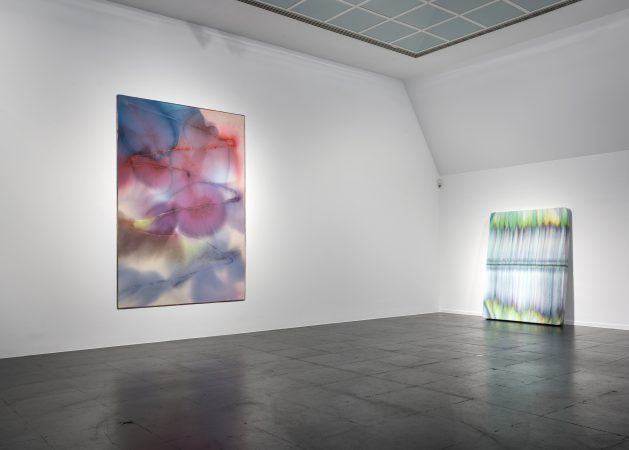 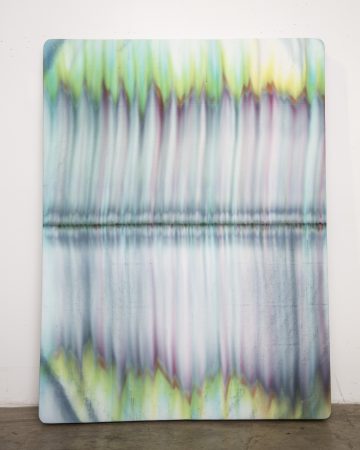 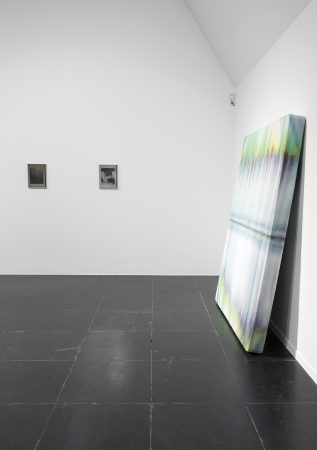 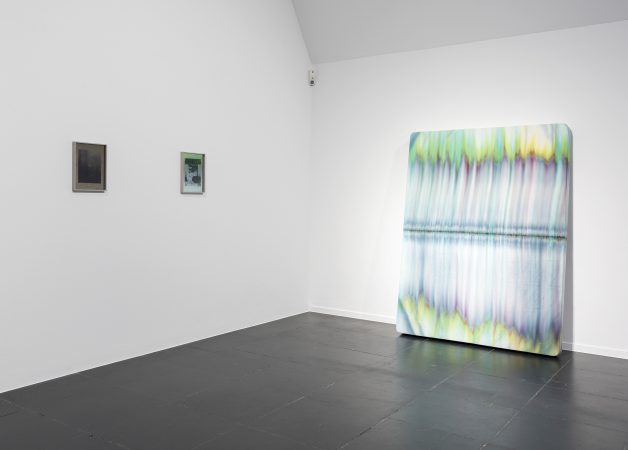 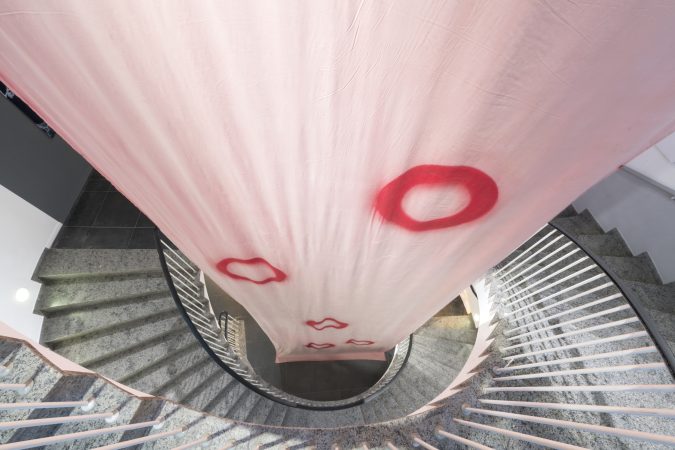 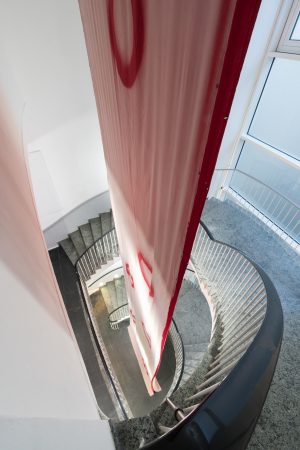 With his works, Sam Falls explores the position of humankind in the face of the perennial pro-cesses that structure our world. The installation “Untitled (Vivaldi’s Four Seasons for the four seasons)” (2015) is enveloped by a celestial sound that only minimally changes. For this work, Sam Falls slowed down the titular piece of music by Antonio Vivaldi so that it lasts for exactly 365 days. The classical piece, which is actually over 40 minutes long, was edited so that its four individual concertos—spring, summer, autumn, and winter—align with the actual duration of the corresponding season. During the exhibition, a computer connected to the internet synchronizes the current date with the soundtrack in real time. In an elaborate process, every single second of the piece is adjusted to the slightly varying length of the seasons each year in order to achieve an exact match. In this work, Vivaldi’s composition becomes an instrument that allows us to experience the passage of time in the form of slowly changing soundscapes.

A total of twelve fabric works hang on the walls, referring to the number of months in a year. The framed works show geometric shapes that are the traces of a lengthy process. The fabric lay in the sun for almost a year and now each bears the shadows of a vinyl record and its cover that were placed on it. Over the course of time, the sun caused a fading process on the col-ored fabric, so that the objects remain visible as an imprint and the abstract figures stand out distinctly.

The individual components of the installation “Untitled (Vivaldi’s Four Seasons for the four seasons)” symbolize Sam Falls’ artistic practice, which revolves around questions about the traces of existence over time. Sam Falls is driven by the states of being and decay, as well as the question of how humankind experiences nature and its phenomena and elements. His work pursues the task of finding a form that can capture the basic existential experience of life versus the infinity of time.

With this work, Sam Falls formulates a complex conceptual framework that vividly renders the ephemeral and unstoppable flow of time as a trace that is left behind. The materials become the bearers of a visible process of decay and decomposition. Traces emerge that point to the absence of presence. As with the actual records, time is also recorded in a patient process onto the twelve fabric works and then retransmitted into the physical exhibition space. These marks connect our lived time back to actual decay and genesis.

In his multi-faceted series of works, Sam Falls is tracking down a connection with the world. His still young but already extremely extensive work spans various forms of expression. Canvases and photographs are as much a part of it as poems and objects in public space. His search for what makes up our world began with studying astrophysics, which led him on a journey via linguistics and philosophical logic to visual art and, more specifically, pho-tography. The ideas of Minimal Art and 1960s conceptual art have greatly influenced his artistic approach. Sam Falls repeatedly emphasizes that in his work, the abstract concept essentially determines the material implementation in different media.

Encountering nature and the night as an intimate space enable him to examine the relationship between things, between genesis and decay. Mostly on his own, Sam Falls spends extended periods in remote areas of the US, often in unspoiled natural landscapes or on the periphery of large cities. In his works, he establishes cycles by using items and materials that can be found in the respective landscape and thus represent part of the environment. He arranges them on fabrics, adds pigments, and leaves the arrangements to a process of change. Natural conditions such as sun, rain, or wind change the material over long periods of time and leave behind their traces.

Exemplary for this process are works like “Untitled (Highland Park, CA, Red 1)” (2011), in which the abstract markers stem from car tires. Sam Falls collected the numerous tires that are carelessly thrown away in the wasteland around East Los Angeles. For months, he left them to the burning Californian sun, laid down on a deep red polyester fabric, which possesses a similar artificial materiality to the rubber tires. For Sam Falls, materials are always directly linked to the ecosystem from which he takes them. He follows a similar aesthetic principle in the work “Untitled (Pallet 10, Pomona)” (2013). The serial sequence of always similar but yet different geometrical forms allows the principles of minimal art to emerge. However, Sam Falls breaks from the strict requirement that art is supposed to create a reality that applies solely to the work, in order to fully address the reality of life through the materials.

The rain paintings series, several of which were created specifically for the exhibition at the Frankfurter Kunstverein, are the result of a reaction of natural pigments and rain. Depending on the conditions at each location, the duration, intensity, and direction of precipitation form completely different color gradients. Sam Falls selects his colors from a palette of watersoluble pigments, which he then applies to the cotton fabric and hangs them on a clothesline leaving them subject to rain and wind. These are bed sheets with a biographical significance for the artist, yet this remains unmentioned in the titles of the works, which solely refer to their place of origin.

With the rope paintings series, Sam Falls broadens his search for self-contained reference systems by using the ropes that left their tangible imprint on the otherwise abstract color fields as the picture frames. They are thus present twice—firstly as a physical object, and secondly as a reference to the time of the object that is now absent from the surface of the picture.

By deliberately leaving his works to natural conditions such as sun, rain, or wind over long periods of time, he transfers his own authorship to the timeless phenomena of nature. Sam Falls knows the mechanisms of action of the materials with which he works, but he seeks the factor of chance in a creative process that he deliberately no longer controls, but instead leaves it to natural conditions.

The materials exhausted in these processes are metaphors for the transience of everything physical. Just as photography can banish the transience of a moment, in Sam Falls’ work, the materials are bearers of marks that are not depictions of the real but have instead become memories of their physical presence. The results are large-format works that form a self-contained system according to semiotic principles, but at the same time display a strong poetic potential. The faded lengths of material, as well as the bedsheets and pieces of paper soaked in colorful rain, are bearers of memory and time that—in the absence of the original elements—explore the transience of all beings. All of the materials and processes they came into contact with over a longer period of time infiltrate their substance. The geo-logical and elemental circumstances that determine their form make them almost like fossils that tell stories about their origins.