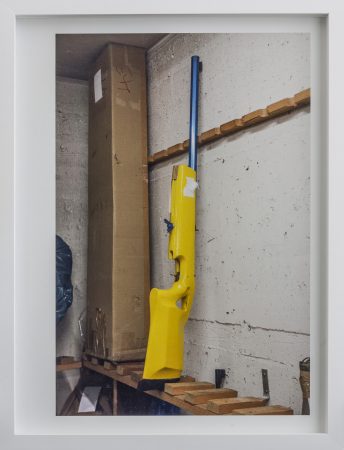 The works of Jana Müller (b. 1975, lives in Berlin) are often combinations of photography and sculptural display elements that are set up as stage-like arrangements. In her works she often deals with memory, the cinematic, the storytelling – with fiction as a reflection of reality. A mysterious and enigmatic aura surrounds the artist’s works, for Jana Müller is interested in the “in-between”, in the open, in that which is not yet defined or cannot be defined.
The photograph “Harlequin” shows a colorfully painted rifle that at first glance gives the impression that it is a child’s toy. In reality, however, it is a functional weapon that was kept in the evidence room of the Frankfurt public prosecutor’s office. The Harlequin is a figure that is understood as a joker, but is provided with diabolical or devilish features. The term harlequin is derived from the Italian word (h)ellechin(n)o for “little devil”. For Jana Müller, the term stands as a metaphor for something you can use for yourself.