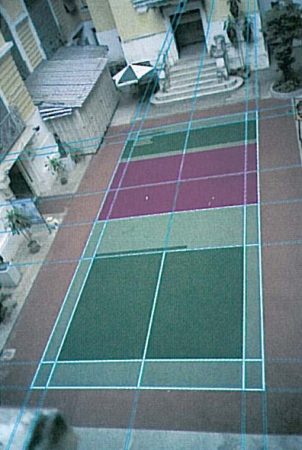 The Surface design studio was founded in 1997 by Markus Weisbeck, a graduate of the Offenbach University of Art and Design, and Andreas Vitt, and works primarily with clients from the fields of visual and performing arts, architecture and music. At the time when Nikolaus Schafhausen was director of the Frankfurter Kunstverein, Surface designed the appearance of the building at the end of the 1990s and produced a free design work as an edition for the Frankfurter Kunstverein in 2000. The photo print shows an inner courtyard interspersed with lines and colored surfaces (it is a badminton court in the courtyard of a museum in Vietnam). A closer look reveals that the playing field markings are actually a design grid, as created by graphic designers in order to optimally accommodate the text and image information in a publication. In fact, for this work, Surface used the graphic grid of the then member magazine “Frankfurter Kunstverein. Hefte” was used for this work. The basic layout of a magazine thus became a “playing field” for the designers – and an everyday tool of the designer was moved to an exotic location. The grid lines, continued in perspective, correspond with the architecture of the building.