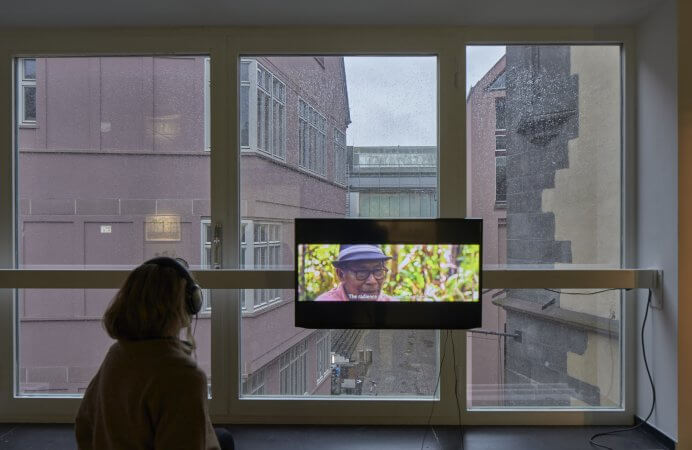 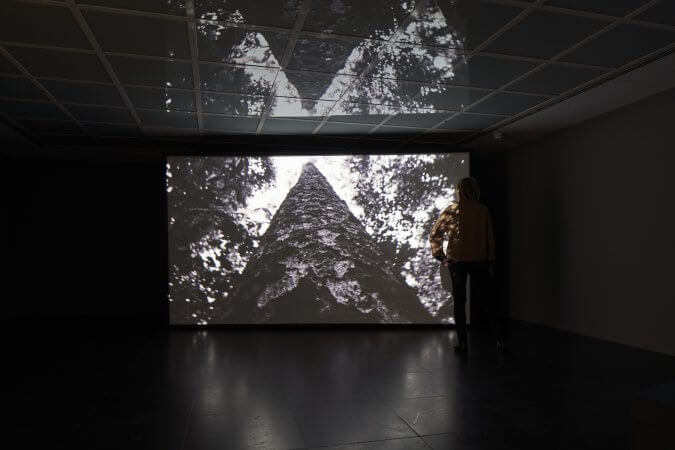 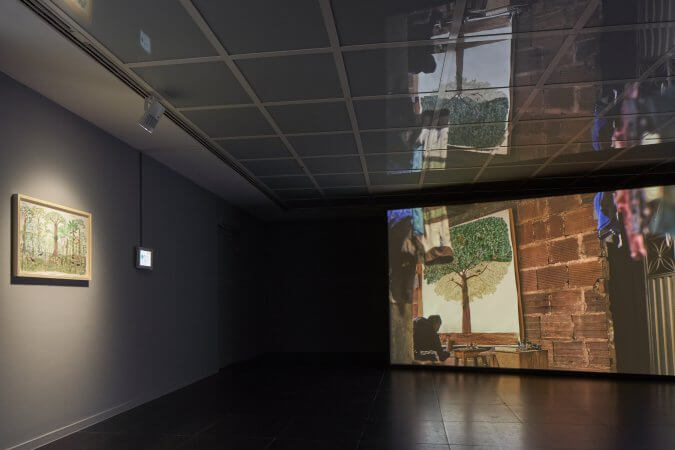 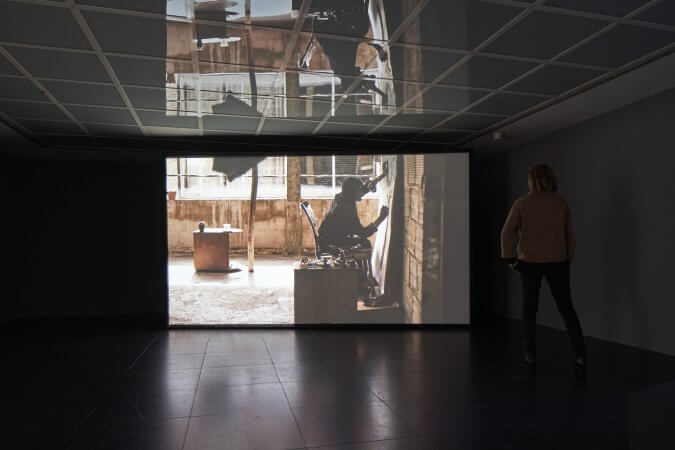 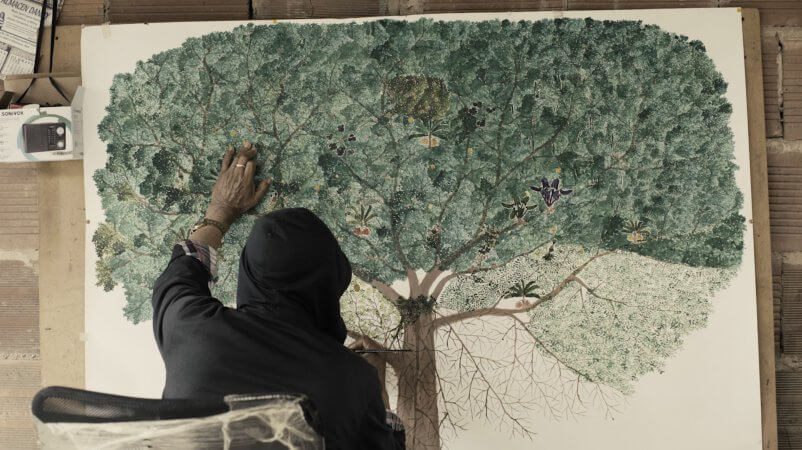 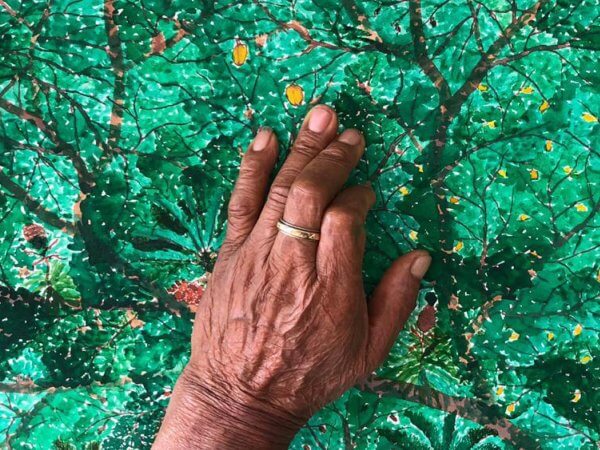 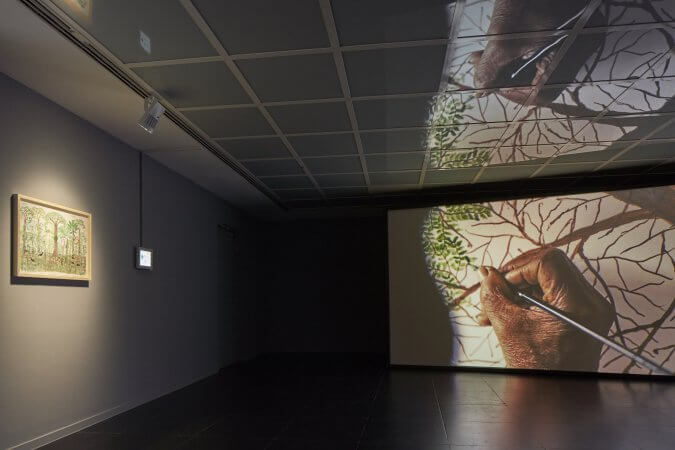 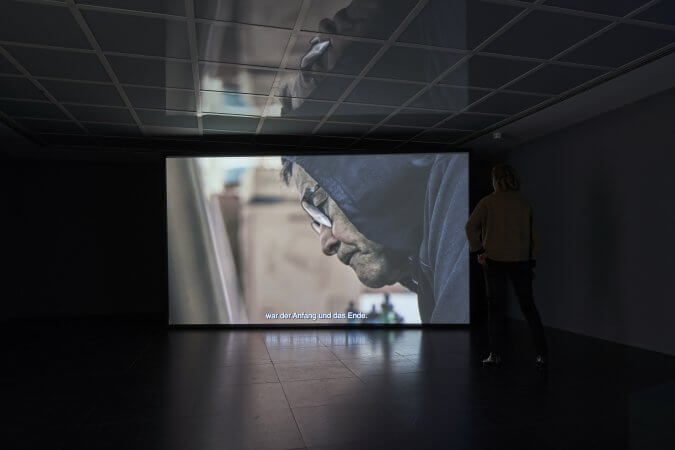 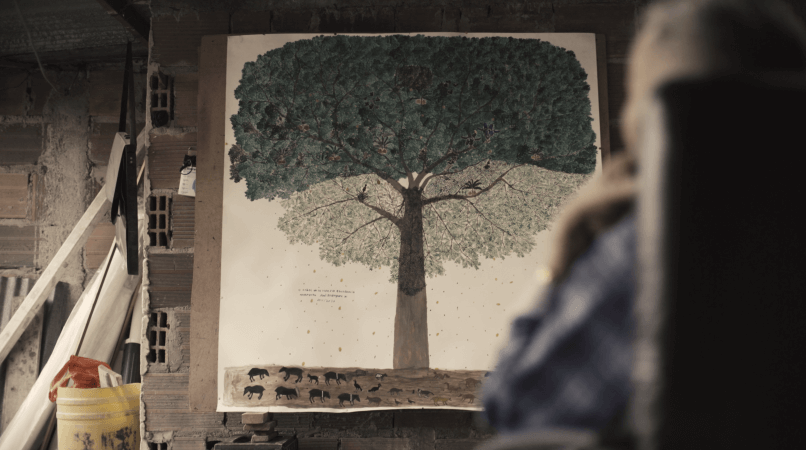 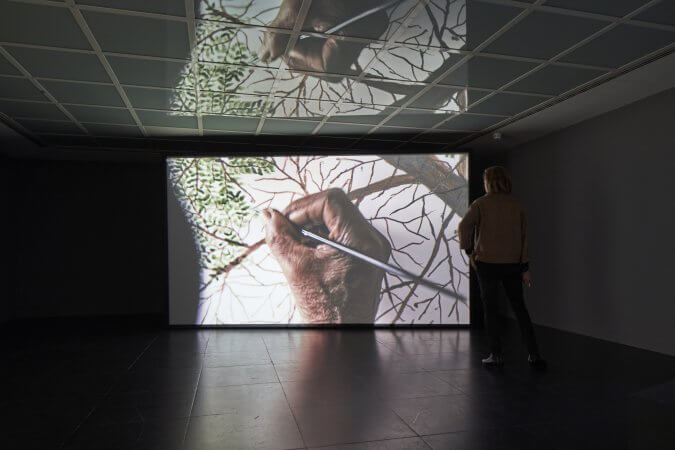 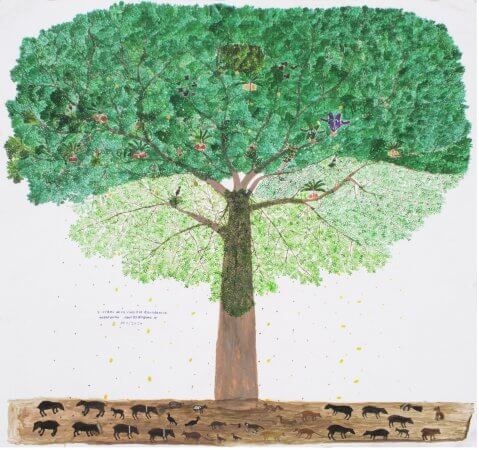 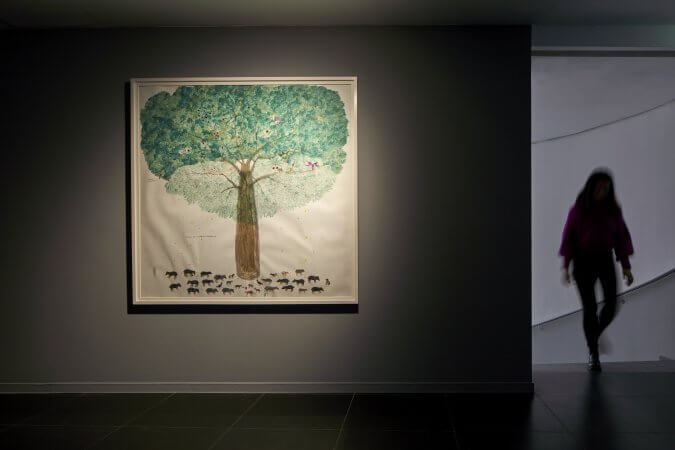 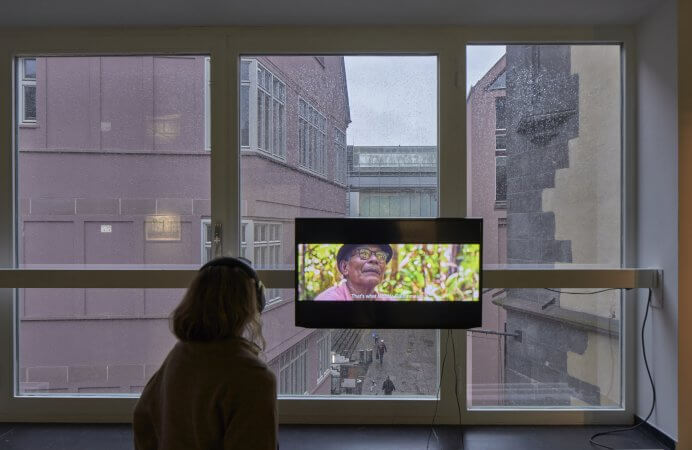 Abel Rodríguez (Nonuya name: Mogaje Guihu) is an elder of the Nonuya, an indigenous community from the middle of the Cahuinarí River in Colombia. Through drawings and storytelling, he passes on his ancestors’ knowledge about plants in the Amazon basin, their coexistence with animals, and their mythological meanings to succeeding generations. Traditionally, in his community, the transmission of knowledge was entrusted to only a few members from generation to generation through a strict lineage. His community has been displaced by environmental exploitation and guerrilla operations by the Revolutionary Armed Forces of Colombia (FARC). To preserve his cultural heritage, Don Abel began to paint his knowledge.

In the 1980s, the Dutch Tropenbos Society, which works to preserve the Amazon and the lives of local communities, began methodically collecting Don Abel’s knowledge of local plants with the assistance of a biologist. He translated his knowledge into botanical drawings so that researchers could understand and document it. Relocated to the million-strong city of Bogotá, he had to draw a lot from his memory. In his drawings, he noted color, flavor, flowering time, use, and the landscape in which specific plants grew. His mapping and oral descriptions became illustrated books, both in Muinane and in Spanish, that make traditional knowledge accessible to all.

Don Abel’s collaboration with the Tropenbos Society united two different forms of knowledge. On the one hand, the traditional indigenous one, in which knowledge about the natural world also includes its spiritual meaning, which is based on an understanding of the whole universe as an inseparable unity. On the other hand, the Western scientific method, which works with classifications and taxonomies, and then from individual disciplines generates results via objective procedures.

In the exhibition The Intelligence of Plants are shown two drawings by Don Abel: Bosque Vega (The Vega Forest) and El árbol de la vida y la abundancia (The Tree of Life and Abundance). The first drawing is part of a series that describes the change of seasons in a forest area. The second work narrates the origin myth of the Nonuya community. The myth is not just a story. It becomes the overarching explanation of how people settled in the Amazon, how they fit into the natural system, and how communities organise themselves, including how plants are grown and how diseases are cured. Roots, branches, flowers, fruits and seeds all hold spiritual significance. The myth of the tree of life transmits the interconnections of the tree community within the forest’s compound, as well as the properties of the tree. Each indigenous community in the Amazon passes on its own interpretation of the myth of creation, in which the order of all living communities, and thus of the entire ecological system, is seen as a coherent creation derived from the idea of the primordial tree.

Don Abel tells the story of the Nonuya community about the origin of their food, about their traditional understanding of sustainable forest management and thus food security for all. The testimony of his cultural heritage becomes an appeal of respect for the laws of nature and the coexistence of species. Rituals serve as a connecting link between man and nature in a spiritual vision of the world. To the Nonuya community, every plant is sacred, especially yucca, coca and tobacco, which connect body and soul, evoking the unity of the all-encompassing tree of life. Don Abel’s memory is not only an archive of botanical knowledge, but also of spiritual belief systems that are in danger of disappearing.

The Frankfurter Kunstverein has commissioned Colombian filmmaker Simon Hernandez to document the creation of the drawing El árbol de la vida y la abundancia in a video portrait. The short film aims to give Don Abel a voice that becomes that of his entire cultural community. Through the film documentary, we can participate in the cultural transmission of Nonuya history and worldview, which Don Abel thus brings to the world.

In addition, the exhibition shows the cinematic work of the colombian artist Fernando Arias. The film, titled ABEL, was made in Colombia in 2014 and captures the Amazon for posterity through poetic images and narratives.

Through the testimony that Don Abel passes on, he keeps alive the worldview that contradicts our industrialised society, and for which we may be longing; a wisdom that explains differently our relationship with the earth and the cosmos, and in which balance is the foundation for the life of all, human, animal and plant.

Abel Rodríguez (*1941, Cahuinarí, Putumayo, CO) was born Mogaje Guihu in the Nonuya community in the Amazon basin and changed his name after the displacement of his family in the 1990s from the Chorrera area to Bogotá (CO) where he still lives and works today. His painterly work began in the 1980s as a collaboration with the NGO Tropenbos. Today, thanks to the work of scholars, contemporary artists and curators, his work is appreciated for the unique vision of world it conveys not only about the Amazon, but also about the human condition. His work has been shown in the following institutions, among others: Museum der Kulturen, Basel (CH), Triennale di Milano, Milan (IT), Baltic Centre for Contemporary Art, Gateshead (UK), Documenta, Kassel (DE) and Athens (GR), DePaul Art Museum, Chicago (US), National Gallery of Canada, Ottawa (CA), Art Museum of the Americas, Washington (US). In 2022 his works will be shown at the Biennale of Sydney (AU) and the Toronto Biennale of Art, Toronto (CA).