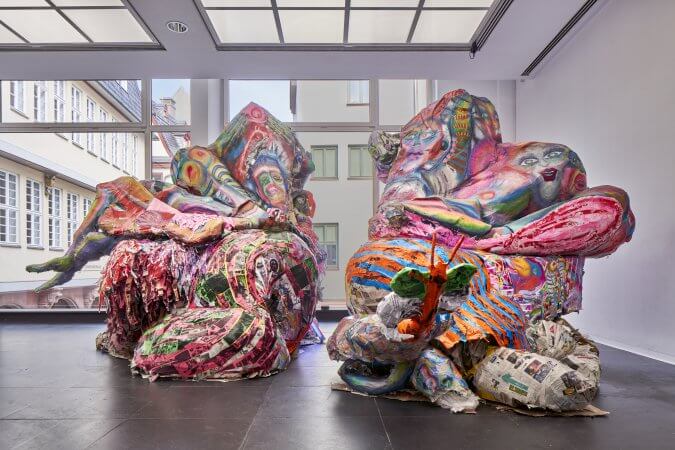 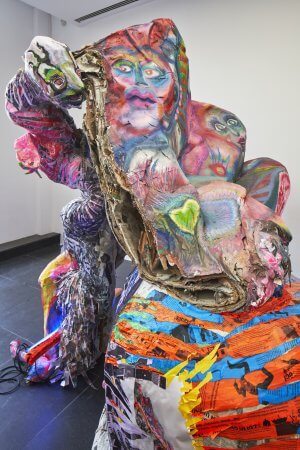 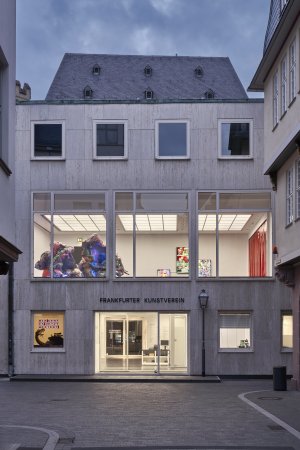 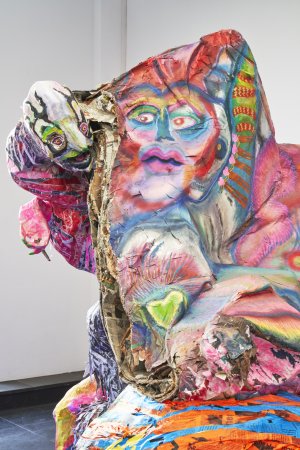 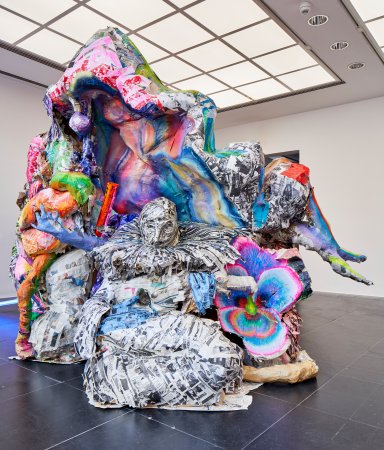 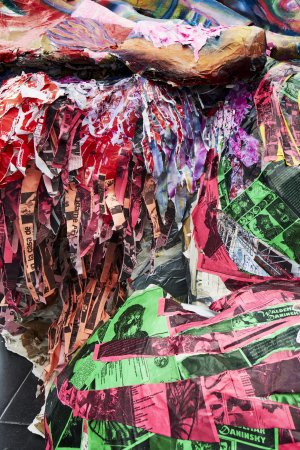 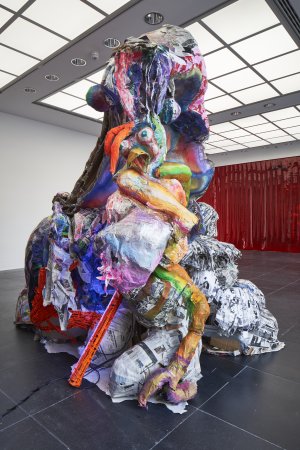 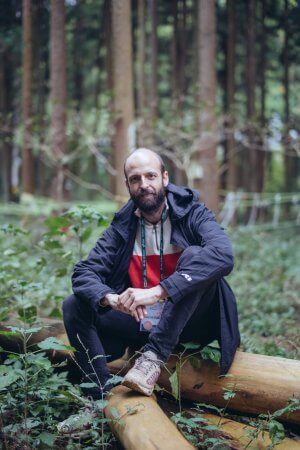 A tale rescued from the ashes

Antoni Hervàs described his ambitious exhibition El misterio de Caviria (The mystery of Caviria), at La Capella, Barcelona, 2016, as ‘an investigation into the transformative power of drawing, capable of activating itself, destroying itself, altering itself and breathing life into what surrounds it. A visual spectacle where the mythology of Barcelona cabaret and classical Greek mythology meet. An invocation to the gods of the underground following the tradition of the ancient Greek Cabiri cult, in which fire, blood and the mocking of masculinity are the essential elements for the redemption of guilt and crime’, so Hervàs.

Starting from drawing, the artist expands into three-dimensional papier-mâché scenes and cardboard transformations. These link up with the subversive power and irreverent sub-culture of the varieté shows performed around the turn of the century in Barcelona theatres and popular venues around the Avenida de el Paralelo and in the so-called Barrio Chino, that part of the city behind the Ramblas.

‘In the Plaça Raquel Meller, which takes its name from the famous Couplet singer who made her debut at one of the oldest popular theatres in Barcelona, the Theatre Arnau, it is said that colourful people converged from five theatres and clubs: the Arnau, the Bagdad, the Barcelona by night, the Bartz and the Apolo wine cellars’. In the early decades of the 20th century the Paralelo Avenue was the cradle of new political movements: republicanism, socialism and anarchism. It also became a new leisure centre for the working class that was frequented by the Catalan bourgeoisie, too. Thus, a profound change in the social perception of sexuality manifested itself, one that challenged traditional morals.

‘From the influence exercised by Leopoldo Frégoli, who settled in the city at the end of the 19th century to premiere the first drag shows, to the stars who succeeded him, they all stirred up an ardent public, night after night. These ambiguous figures shone fleetingly in these spaces of resistance until they faded away with the outbreak of the Civil War. Subsequently, these popular myths of passion and unbridled love were retold and given new meaning. This meant it was possible for the artists to return to the Couplet and so express the forbidden, which the censors of the authoritarian dictatorship sought to suppress.

Madam Arthur stood out among the numerous luminaries of the local travesty scene. At the Barcelona de Noche club she astonished Federico Fellini, who later paid tribute to her in his 1957 film Nights of Cabiria. She performed a show in which she laid bare her artifice, transforming from femme fatale by tearing away her eyelashes and feather boas and showing her naked face, revealing “her secret”. She staged this with overblown sets decorated with tropical motifs. Reminiscent of exotic locations, they were built with improvised materials, yet glittered in the spotlight like sequins.

The Theatre Arnau became the most famous venue for these fantastical settings. After the curtains fell in 2004 and the building decayed, it continued in the collective memory as a stage for and witness to the love affairs, celebrations, rows and mundane stories of all those who, in the constant flow of life, turn into protagonists of the drama and intensity of those passionate songs, songs that have made the theatre come alive.’

With his work Under the firelight, the ash shines like glitter Hervàs takes the charismatic fan-shaped pediment of the Theatre Arnau as a starting point for something the artist expresses as follows: ‘The creation of a mutant sculpture made of materials that reject nobility and celebrate recognisable scars and contrasts. The forms of the fan, star, skirt, leg merge. The installation determines the room with the loud arrival and bearing of a star. Come and see, we don’t know what might happen, it’s cabaret.’

*This work revisits his previous project Apuntes para un incendio de los ojos (Notes for a fire of the eyes), a paper-mâché structure in the form of a portal referring to the Theatre Arnau for the exhibition Panorama 21 at the Museu d’Art Contemporani de Barcelona, now taking on new shape and meaning.