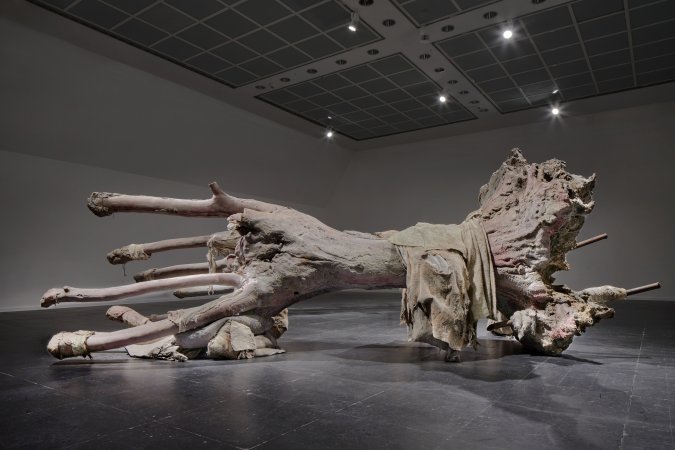 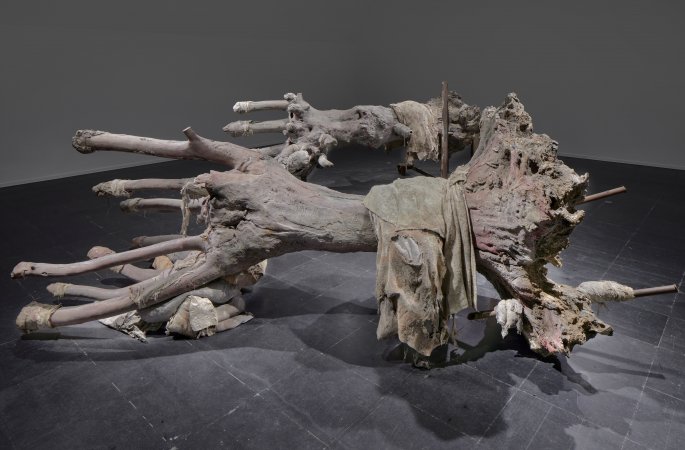 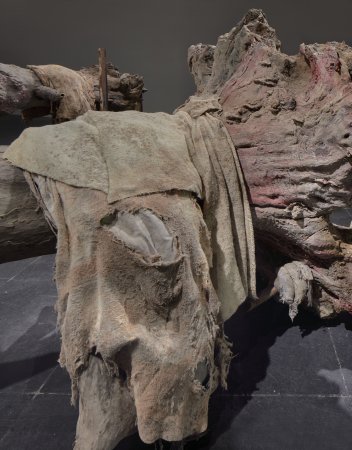 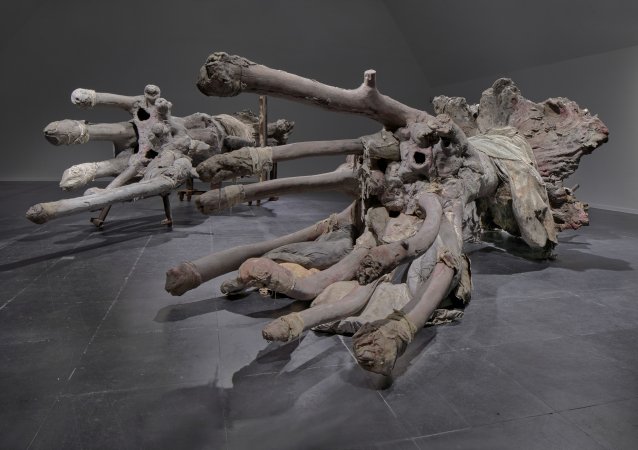 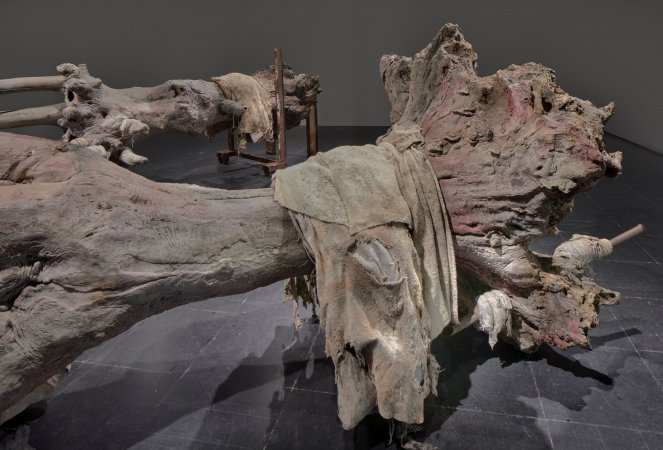 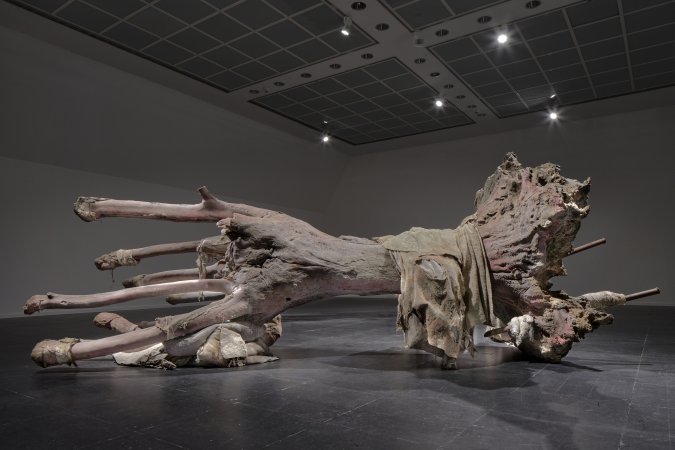 Courtesy the artist and Hauser & Wirth

Berlinde De Bruyckere’s work emerges from a desire to find images to confront the great existential questions. Ephemerality and corporeality, defenselessness and connectedness to other beings are the themes that make her works unique experiences in contemporary art. The exhibition The Intelligence of Plants features the monumental double sculpture Embalmed Twins I and II. The sculptures were born out of a discovery in France. Two centuries-old oaks, which repeatedly impressed the artist in their majesty during her walks, fell victim to hurricane Cyrill in 2016. They had grown together and fell with their crowns intertwined, as if this were part of their destiny. Berlinde De Bruyckere wanted to translate the emotion of seeing the power of natural forces into a sculptural work.

With these found logs she began her work of transformation. Using wax, metal, epoxy and textiles, she transformed the found oak trees into bodies that no longer resemble a tree, but were transformed by the materiality into a universal corporeality. Wounds, scars and veins showing through under the bark turn the tree into a being between human, animal and plant. Life has departed from the material, leaving behind pure physicality. The title refers to the ancient technique of embalming, a practice of preserving bodies that shapes Berlinde De Bruyckere’s artistic activity.

The artist models new parts of the body in wax, assembles different materials to form new bodies that blur the attribution of whether plant, animal or human. The created beings are united by a wounded carnality that helplessly reveals itself.

The pictorial language echoes the traditions of Dutch and Flemish Renaissance painting from the 16th century. De Bruyckere draws on the heritage of the European Old Masters and Christian iconography, but creates new forms that translate these strong references into a contemporary language.

The Embalmed Twins lie alone, laid out, in a space illuminated by light that mimics that of the moon. Our bodies meet theirs without distance. The bodies of the two trees were the inspiration for De Bruyckere’s reflections on the fragility of life and corporeality. It was the moment of encounter in the sight of the fallen trees, her profound perception of the loneliness that every being experiences in the abandonment of its aliveness, that the artist transferred into her work. It is the artist’s empathetic gaze, which also touches the creaturely in the fallen tree. Neither fear nor disgust guide her, but an impulse to give protection, to care for the vulnerability of the being. She bandages parts of the tree, places blankets on it and protects the parts that reveal the transparency of ephemeral flesh. As an artist, she seeks the interstices of human experience, connecting with the deep-seated anxieties for which we can hardly find rituals or words today. With her art, De Bruyckere creates a space without words, offering us an encounter with the essence of the other. It is not a human being, an animal or a tree, it is the expression of vulnerable life per se, an ecce homo of organic mortality and inter-being corporeality.

Berlinde De Bruyckere (*1964, Ghent, BE) is a Belgian contemporary artist who lives and works in her hometown Ghent. She creates large-scale sculptures, installations, drawings and watercolours around the theme of the body and existence. In 2013 De Bruyckere was selected to represent Belgium at the 55th Venice Biennale (IT)where she unveiled her monumental work Kreupelhout – Cripplewood, a collaboration with Nobel Prize novelist J.M. Coetzee. Recently De Bruyckere has extended her field of activity towards the performing arts as a Scenographer, in close collaboration with photographer Mirjam Devriendt. Her works have been presented in numerous international exhibitions, including the following institutions: Bonnefanten Museum, Mastricht (NL), Fondazione Sandretto Re Rebaudengo, Turin (IT) Kunsthal Aarhus (DK), Kunsthaus Bregenz (AT), La Biennale di Venezia, Venice (IT), Palazzo delle Esposizioni, Rome (IT), Berlin Biennale, Berlin (DE), The Metropolitan Museum of Art, New York City (US), Whitechapel Gallery, London (UK), Pinchuk Art Centre, Kiev (UA).