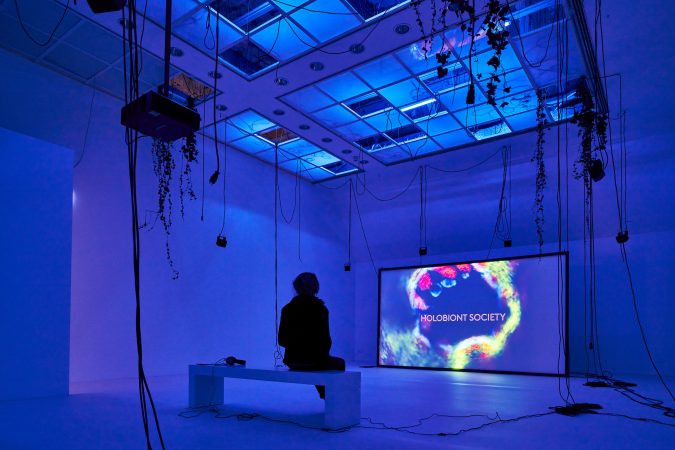 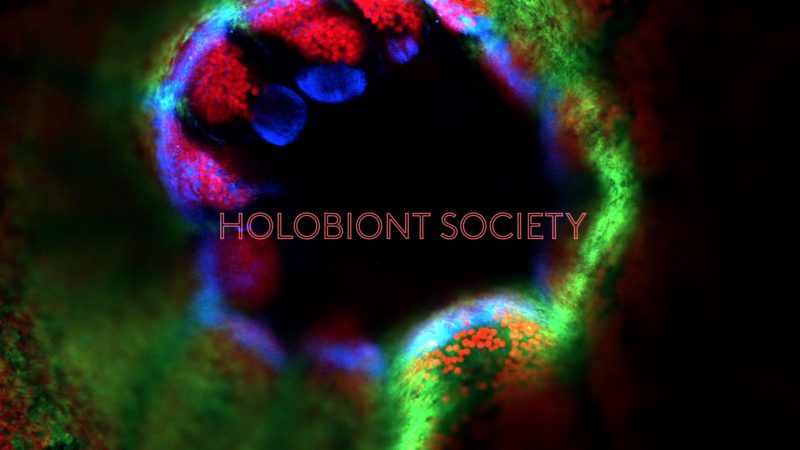 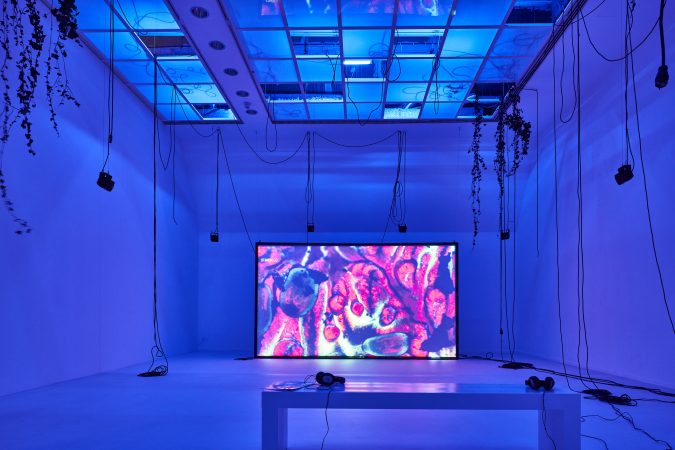 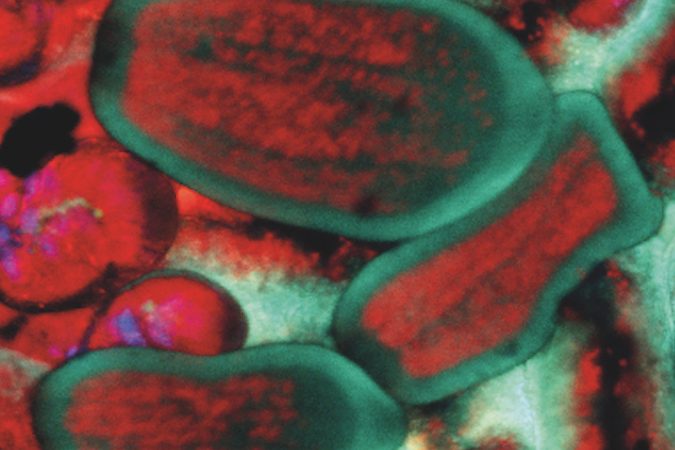 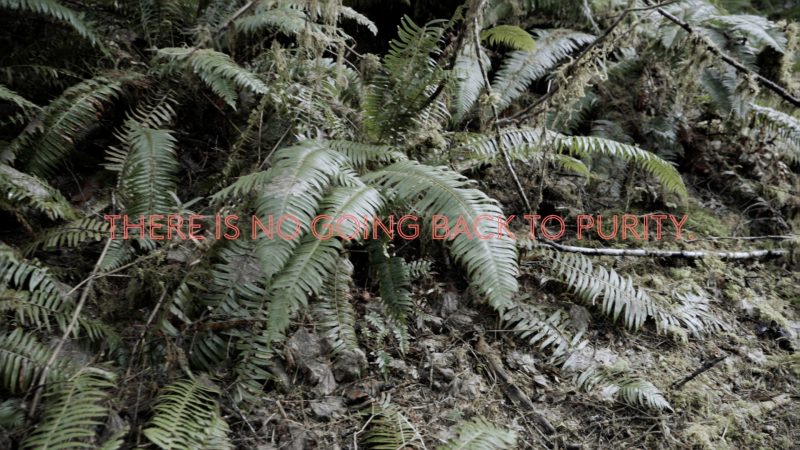 The title of Dominique Koch’s work “Holobiont Society” consists of two terms. “Holobiont” stems from biology. Coined by microbiologist Lynn Margulis in 1991, it is a technical term for the merge of a host and all its microbiological guests. Koch combines this with the word “Society,” opening her work to the possibility of understanding biological hypotheses as metaphors for social and political models.

The work consists of a visually impacting film montage accompanied by two separate audio tracks: electronic music by Tobias Koch creates a surround sound landscape in the room. With the headphones visitors can listen to interviews with three internationally renowned scientists – Scott Gilbert, Maurizio Lazzarato and Donna Haraway. The speech fragments are combined with various images that both refer to and extend the theoretical discourse.

The film opens with shots of the surface of the ocean, whose calm movement symbolizes endlessness. However, Haraway interprets this as a pars pro toto representation of the history of freighting goods and people by sea. These associations are reinforced by the words of philosopher Maurizio Lazzarato, who talks about colonial transport routes and capitalist exploitation.

The film begins with biologist Scott Gilbert’s thoughts on so-called genetic determinism: a theory claiming each person is entirely determined by their genes. Gilbert considers this scientific paradigm false, even destructive in its view individuals are entirely predetermined by their genes. Additionally, genetic determinism can extrapolate extremely problematic notions of race, gender, and even intelligence, whereby an individual’s identity is defined purely by their DNA rather than their environment or experience.

Dominique Koch then segues into a political dimension, expressed in the film through the voice and ideas of Maurizio Lazzarato. Lazzarato advocates a critique of the mechanisms of capitalism. He reflects on the principles of exploitation that serve power and the accumulation of property. His analysis considers warfare, the use of force, and looting as methods. He classifies the nature of exploitation into three main categories: class exploitation; exploitation through colonial structures and thus, the notion of race and; thirdly, the exploitation of women.

The last position in Koch’s film is assumed by biologist and science historian Donna Haraway. Haraway shares excerpts from her complex theoretical apparatus. In it she questions the idea of the privileged position of humankind and the individual as an entity. Haraway sees these constructions as no longer viable; the combined knowledge of numerous disciplines is far too extensive not to negotiate a more complex and comprehensive idea of life and the interplay between all things and beings.

Dominique Koch’s work represents current debate in numerous disciplines on the need to critically reexamine established ways of thinking based on new knowledge. As an artist, she succeeds in finding an aesthetic form in which to emotionally charge fragments of discursive knowledge structures.

Dominique Koch (*1983 in Lucerne, Switzerland) lives and works in Basel and Paris. From 2004 until 2011 she studied photography at the Hochschule für Grafik und Buchkunst in Leipzig. Her installations can be described as “thinking laboratories.” The artist merges different fields of research, such as insights from molecular biology, with theories of capitalism. She creates hybrid forms and improbable intellectual encounters, to focus on themes that usually get lost in the flow of images and information.

Recent solo exhibitions include “Holobiont Society” at CAN, Centre d’art Neuchâtel (2017), “Maybe We Should Rejuvenate the Words rather than the Bodies” at Rinomina in Paris (2016) and “Beyond Chattering and Noise” at Centre Culturel Suisse in Paris (2015). Recent group exhibitions include “Futurs Incertains” at Musée d’Art de Pully (2019), “An Eye Unruled” at Swissnex San Francisco (2019), “Operaismo Naturale: Ecology of the Event” at Center of Contemporary Art Plovdiv (2018), “1 iJ” at EKKM Tallinn (2018), “Acquired!” at Kunsthaus Baselland (2018), “Biotopia” at Kunsthalle Mainz (2017), “Ex Situ. Samples of Lifeforms” at Copenhagen Contemporary (2017) and other group exhibitions at Kunsthalle Basel (2015/2018), Photoforum Pasquart (2017) and Fotomuseum Winterthur (2014).