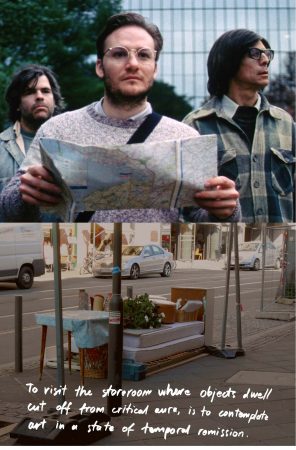 In the context of the Deutsche Börse Residency Program

A central theme in Darko Aleksovski’s work is the social condition and its manifestation in space. In particular, the Macedonian artist addresses the contrast between public and private spaces, the relations within art institutions as well as factors that define social power structures. Based on these ideas, Darko Aleksovski worked on the project „Frankfurt in a Box“ during his stay at the Deutsche Börse Residency. A collection of personal site-specific objects has been transformed into a small city archive with independent memories.

Redmond Entwistle is a British artist-filmmaker, whose work is characteristic for an experimental mixture of documentary and fictional elements. Recent films focus on historical overlaps, social milieus and urban spaces. During his time at the Deutsche Börse Residency, Redmond Entwistle researched for his upcoming film “Lockvögel”, which deals with the GI Edward Pimantel, who was stationed in Wiesbaden and murdered by the RAF in 1985. Again, historical events are extended with an additional narrative in order to remember the GI’s fate.