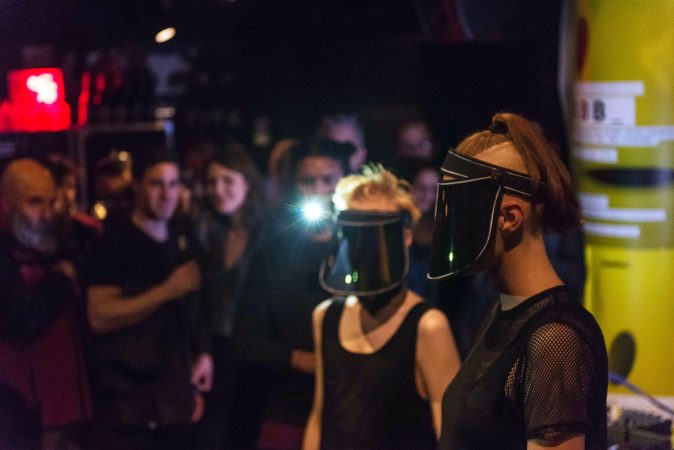 BBB_ „id rather be an iphone“

BBB_ is a post-digital cross disciplinary project, working at the interface of music, performance, art, design and philosophy. Behind BBB_ is the artist duo Alla Poppersoni and Alexander Sahm. Their work is a reflection of emotionality and irrationality in a world of global forces, Big Data and intelligent technologies. Poppersoni and Sahm present themselves as a mediator between digital and physical realities. While Poppersoni speaks conceptional lyrics in her own and synthesized computer voice, Sahm accompanies them with electronic Sound-Ready-Mades. The relinquishment of the stage transforms the performance into an intensive, club-like experience for the audience.
The title of the performance is taken from the statement “I’d rather be an iphone than a woman” by British theorist and feminist Helen Hester. “I’d rather be an iphone” is not only the title of the performance, but also of BBB_’s first music album. The album is accompanied by a booklet, containing a downloadable version of the album, as well as bonus tracks, videos, animations. With the Augmented Reality App “Aurasma”, the booklet can be brought to live.

The performance is part of the Night of the Museums 2017.
Ticket price: 14 € (including ticket fees), family ticket: 29 €, reduced ticket: 9 €
• from 7 pm in all participating museums
• presale online www.journal-tickets.de, or by telephone (069) 4076620
and in all museums and presale ticket shops

Things Tonight – Night of the Museums 2017