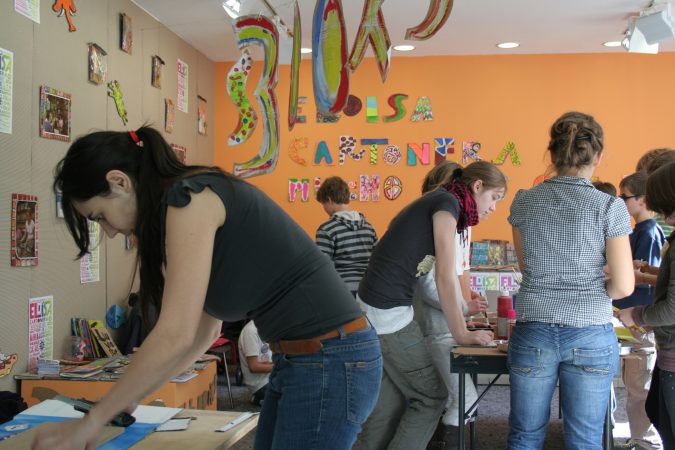 Create your own book

Eloísa Cartonera is a a self-managed publishing house and editorial project set up by the artists Washington Cucurto and Javier Barilaro in 2003. It links the distribution of literature with the work of the so called “cartoneros” (people who retrieve cardboards from garbage as a way of economic subsistence) while producing books: The artists use photocopied texts donated by Latin American authors and bind them in hand-painted cardboard covers. Every book becomes a unique copy. Meanwhile hundreds of colored copies are produced, some of them are presented at Frankfurter Kunstverein.

As contribution for the exhibition “Tales of Resistance and Change” Eloísa Cartonera offered several workshops under the title “Create your own book”. The participating children and teenagers had the opportunity to create and produce their own book covers. During the creative process they could develop a feeling for texts as well as for form and materiality of the binding. At the same time in cooperation with the artist group an intercultural exchange was encouraged. At the end every participant received its own individual designed book and could take it home.

For children and teenagers from 10–15 years.