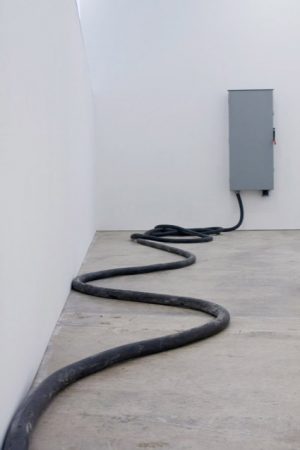 The Frankfurter Kunstverein took part at the SITE Santa Fe International Biennial 2008 in New Mexico, USA, which runs from June 22, 2008 to January 4, 2009. As one of the seven chosen partner institutions for SITE’s 2008 Biennial exhibition, entitled “LUCKY NUMBER SEVEN”, the Frankfurter Kunstverein presents Mandla Reuter’s new work “Fourth Wall” (2008). The “SITE’s Biennial” has for over 10 years been considered to be among the most important Contemporary Art Biennials in the USA.

With “Fourth Wall” the Berlin based artist Mandla Reuter (*1975, Nqutu, South Africa) produced a site-specific work for the Biennial. The artist describes his work in the following statement: “The exhibition work ‘Fourth Wall’ consists of a high currency connection taken from the cities electricity network, which carries voltage high enough to power a theater, a dark ride or the lighting required to illuminate the Eiffel Tower, or to provide a medium-sized city with electricity. On the one hand the work can be seen as a concrete elevation of the technical possibilities of the exhibition space, making any kind of apparatus feasible. On the other hand, seen as a sculptural work itself, which is meandering throughout the exhibition space and revealing its purpose at the end, it plays with the same mechanisms that are employed by entertainment industries.”

Mandla Reuter confounds the viewers’ expectations of space by transforming the physical parameters that define it. His architectural interventions have included placing a boulder in front of a building doorway – blocking visitors’ entrance or egress – and rewiring the electrical light switches in an art gallery in order to darken rooms at irregular intervals, intentionally removing objects from view rather than illuminating them. These simple gestures not only address the functionality of space, but also toy with the idea of how such spatial manipulations affect viewers.

Reuter’s recent installations incorporate cinema, and in these works he investigates ideas of space as well as the production of culture and spectacle. He has transformed private apartments in Madrid and Hamburg into make-shift movie theaters that screened the same blockbuster movies playing at the local Cineplex, in effect circumventing the conventional network used to distribute Hollywood films. Reuter’s work dissolves the physical and perceptual distinctions that exist between interior and exterior, and public and private space.