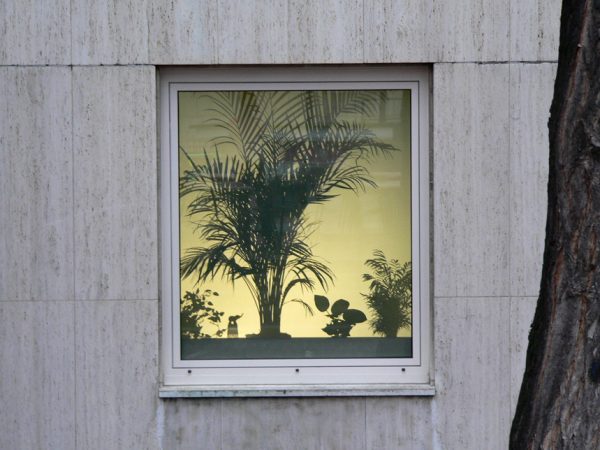 The Ten Reasons Room – situated to the right of the entrance desk – has been slightly altered thanks to an installation conceived by the artist Max Sudhues (Münster, 1977). To be seen during nighttime Dschungelfenster Frankfurt, 2006 is an intervention in the small two windows facing the Römerberg. The work reconsiders the nature of the art space and its relationship with the urban space on the one hand – the Römerberg – and with the domestic space, on the other.

The installation functions at night. Through the windows close to the main entrance of the Frankfurter Kunstverein one could see the shapes of some familiar objects, even plants seem to be on display in the interior like in a home. A warm dim light “showers” the scene: life seems to be going on inside. Looking from the outside, the institution seemed another kind of place, the display invited to a voyeuristic endeavour. We were outside, waiting perhaps to see someone moving, some life going on, but also wanting, desiring to be invited to sit in, to share the singularity of that scene.

Can the Kunstverein be a home? Is Gemütlichkeit an acceptable feeling to convey in the spectator? When considering the relationship between art and the public sphere, (both the institution and the street) one could recall the brilliant statement of the late Martin Kippenberger who comments, as a reaction to Joseph Beuys, that every artist is a human being. It is in that respect that the intervention of Max Sudhues found a context in the particular space of the Frankfurter Kunstverein.