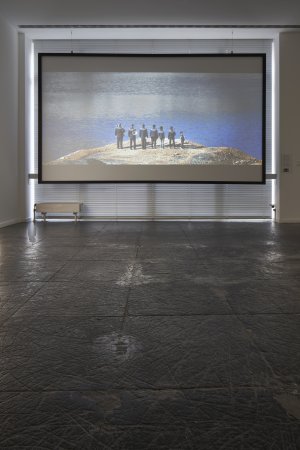 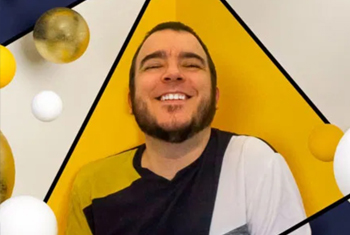 An invocation of the apocalypse

To invoke is to voice an incantation or a plea for help, for a favour or protection, to a higher force. Helicon is an invocation: a brass band, composed of seven members of different ages playing a melody while trying, in a futile gesture, to draw a response from the Earth and thus instigate the end of the world. The melody is played repeatedly, like an unanswered prayer. The ceremony takes place in front of an artificial lake that has formed as a result of more than a century of mining activity in La Unión, Cartagena (Murcia). Dyed red from waste, the water smells of chemicals, but our gaze, steeped in romantic idealism, transforms the scene into a primordial, untouched landscape.

An artificial eye, that of a drone, surveys the area, reacts to the call of the music and observes the ritual taking place. The drone affords the viewer the perspective of Pegasus, the winged horse from Greek mythology who inhabits the lands called Helicon. The mountain of Pegasus, which hosts the tomb of Orpheus, is contaminated.

Tension lies in the expectation of disaster. The instruments invoke an apocalypse, a word meaning unveiling or revelation in the original Greek. The musicians aim at nature, challenging it in a desperate gesture to struggle against an invisible opponent: they want to bring to an end an inevitable war. The helicon (from the Greek helikos, ‘spiraling’) is also a brass instrument, popular in Central and Eastern Europe and played in military fanfares.

Whether in his videos or installations, Fito Conesa explores the performativity of music, the materiality of the voice, taking in an expanded conception of sound, an investigation into non-verbal communication, a search for correspondence between languages. Not so much focused on the rendering of these, but on a synaesthetic practice, which means the activation of additional sensory or cognitive pathways that are generated in these interconnections. Thus, he has worked with bands and fanfares in collective projects that have visualised the pollution of asbestos. He has converted into music the movements of enemy fleets during a naval battle. He has converted the pipes of disused organs into a new instrument that emits the sounds of times past. He has recorded a male choir made up of teenagers whose voices are in the process of breaking.  He has explored digital voices and animal communication; he has claimed the power of mining songs as popular culture and the story of collective decline. Music as a transition between times, spaces, identities, fears and longings.

Fito Conesa (*1980, Cartagena, ES) is an artist and producer with a degree in Fine Arts from Barcelona University (ES). He has given and designed workshops for the Education Department of Fundació la Caixa, Valencia (ES). He worked as an art director on the Green Santo Domingo campaign for Santo Domingo City Hall (DO) and formed part of the tutorial team of Sala d’Art Jove in Barcelona (ES). His work has been shown at various museums and festivals such as the Oslo Screen Festival 2010, Oslo (NO), Barcelona International Poetry Festival (ES), the Centro Cultural Español, Santo Domingo (DO), Matadero, Madrid (ES) and Caixafòrum, Lleida, Tarragona and Barcelona (ES). He has contributed to publications such as Zeitgeist: Variations & Repetitions (Save as… publications, 2010), Unique Window Display (Loft Publications, 2009) and Suite for Ordinary Machinery (Save as… publications, 2008), with the latter being included in the holdings of the Tate Library, London (UK), the Museo de Arte Contemporáneo Reina Sofía, Madrid (ES) and the MACBA Barcelona Museum of Contemporary Art, Barcelona (ES).