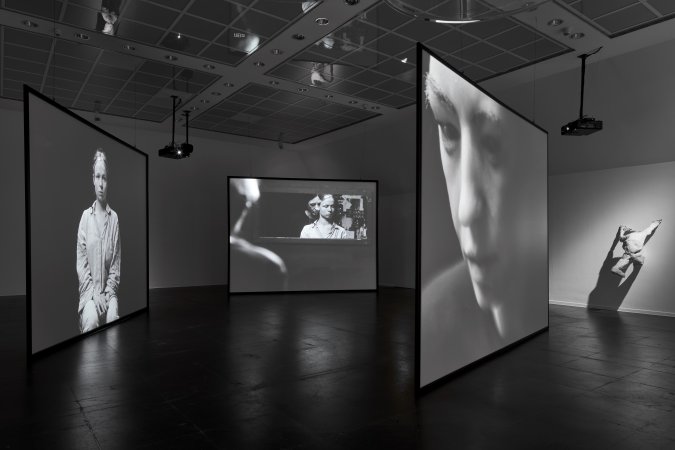 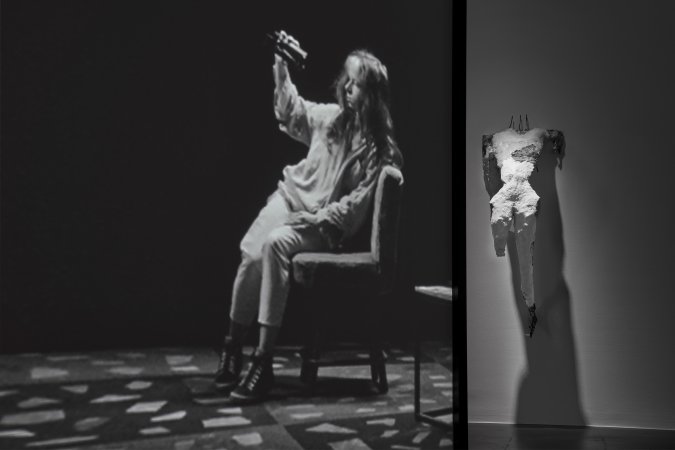 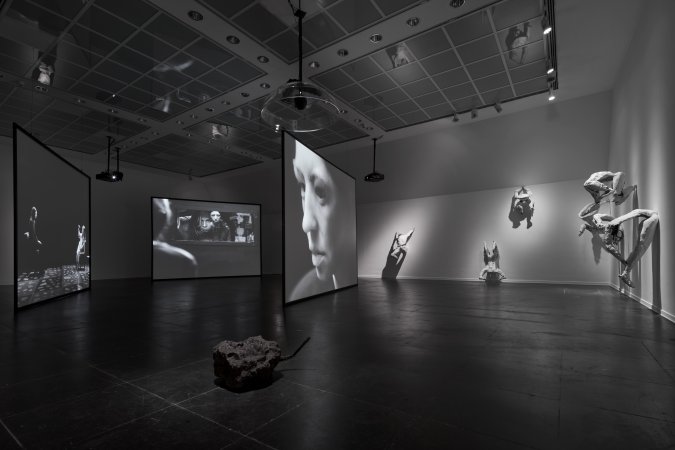 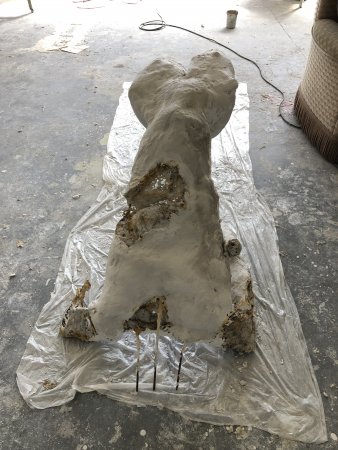 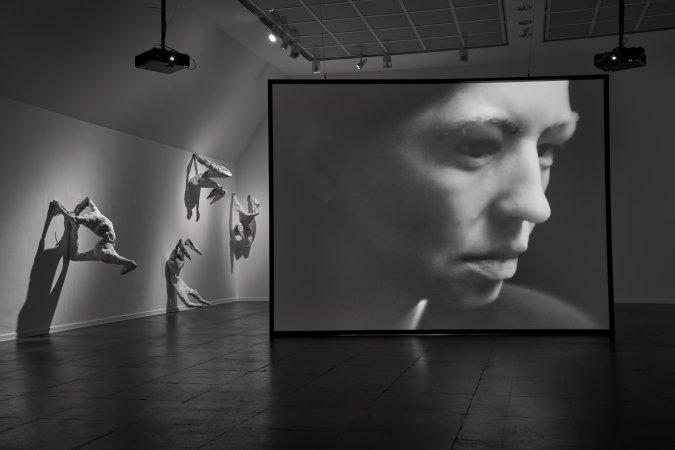 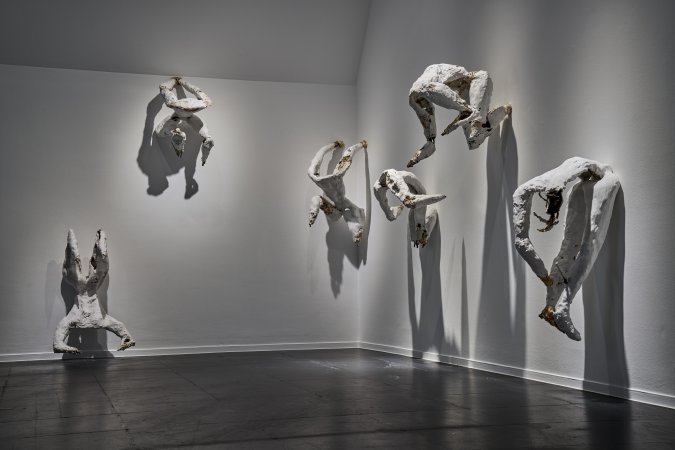 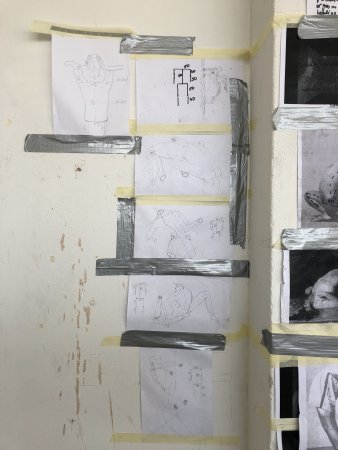 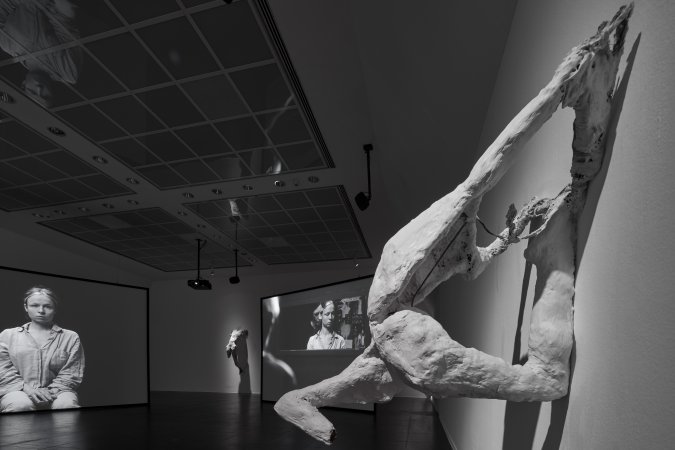 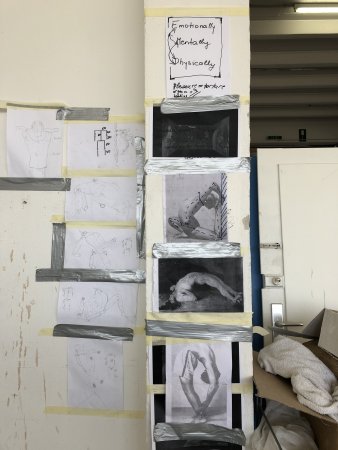 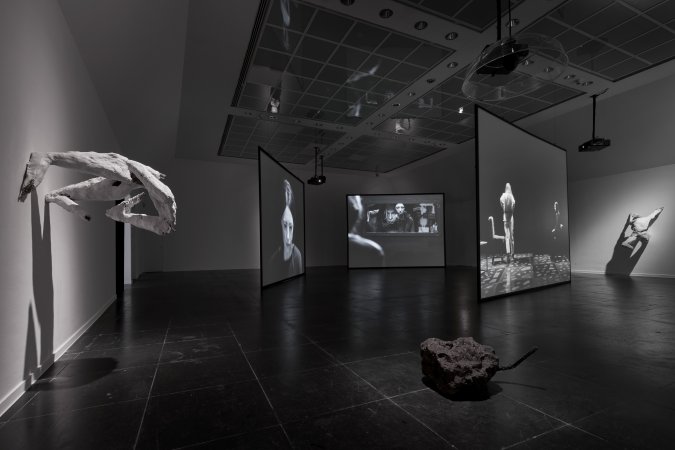 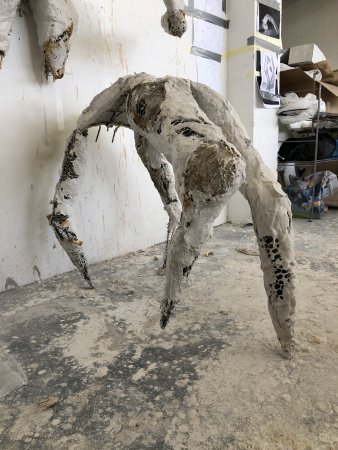 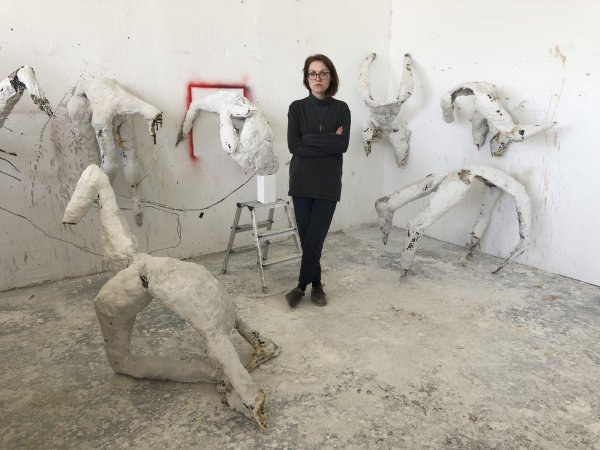 Gintarė Sokelytė in the studio with her sculpture series Selfnoid, 2021, ©Frankfurter Kunstverein

Gintarė Sokelytė draws, paints, but is also a sculptor and filmmaker. For the expansive installation she has developed for the exhibition And This is Us 2021, she presents a three-channel film work and eleven sculptures.

The body is the starting point of her investigation. For the artist, the human body is the key to the perception of the world. The body is both the instrument through which the self experiences the world and its own existence and the connecting surface to the soul and the emotions.

The action of the film is set in a dark, stage-like space where two female figures sit in relation to each other. They remain separated by a glass wall through which they observe one another. One is dressed in black, she sits still and her gaze goes into space. The second wears white and paces the room in constant restlessness. Only after a longer look does the controlled, fixed position and reduced facial expression of the first woman reveal that she is a humanoid robot with artificial intelligence. She sits motionless and her body reveals nothing of the state of her mental processes or emotions. The movements of the young woman in white, on the other hand, are hasty and expansive, she frees herself of her clothes and bends her body to the utmost. First with a video camera, then with a mirror, she repeatedly tries to capture her own body and explore the woman in black through the glass wall, despite being unreachable.

The humanoid robot derives from the artist’s immediate circle of friends. It was constructed by a friend as an artificial intelligence with a human body, facial expressions and gestures. The programmer spent time with the figure until they could no longer withstand the effect of Uncanny Valley, the paradox of the artificial but lifelike. Sokelytė took over the character and made her one of the two protagonists of her film. This character is the counterpart of the young woman. While the latter acts out turmoil and restlessness, the android remains calm and seemingly emotionless.

The actions in the film are accompanied by a barely perceptible constant hissing. The arrangement of the three screens in the room relates to the narrowness of the action stage in the film. A space within a space is created in which the visitors must also engage in a sounding-out movement, like the young woman in white.

Through the spaces between the screens, lines of sight are created to eleven sculptures on the wall. In human size and without skulls, they show their open forms in poses of overstretching. Eleven white figures whose skeletons the artist has welded with concrete reinforceing bar, covered with wire and shaped into brittle flesh by applying fibreglass soaked in plaster. A stone on the floor, its rusty surface altered with acids, lies head-like on the ground.

The question of the visibility of mental states in physical matter runs like a thread through Sokelytė’s film and sculpture. Photographs and images on the wall behind the young woman in white, placed almost unnoticed, demonstrate the whole repertoire of physical tension in the act of extreme deformation. It is these images that served as models for the artist in creating the sculptural figures; images of athletes in extreme poses, bodies in convulsive deformation, paintings of people in ecstasy. Sokelytė’s central motif is the question of the body as an instrument for perceiving the world, the inner and the outer. The forms of the presented bodies in their overstretching and spreading, open up associations that range from the possibility of an acting out of lust to the expression of torment.

Gintarė Sokelytė (*1986, Kėdainiai, LT) lives and works in Vilnius (LT) and Frankfurt am Main (DE). She works with various media and realises videos, site-specific paintings and sculptural works. Since 2016 she has been studying at Frankfurt Art Academy Städelschule (DE). Previously, she completed her bachelor’s degree in screen printing at Vilnius Gediminas Technical University (LT) from 2005 to 2009. In 2008 she spent a semester abroad at Odense University of Southern Denmark (DK). Among others, Gintarė Sokelytė has exhibited in the following institutions: Osthang, Darmstadt (DE), Palais de Tokyo, Paris (FR), Montos tattoo art space, Vilnius (LT).