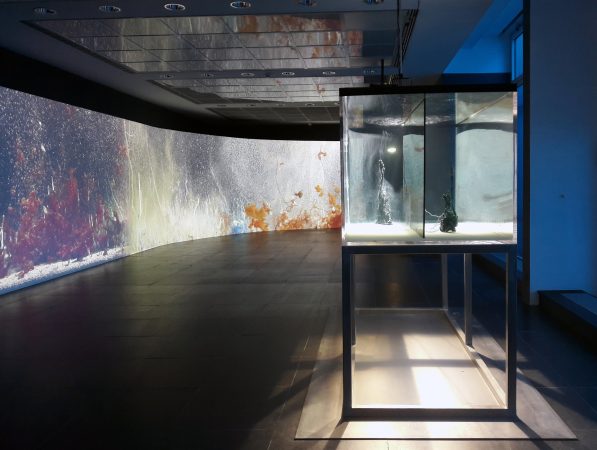 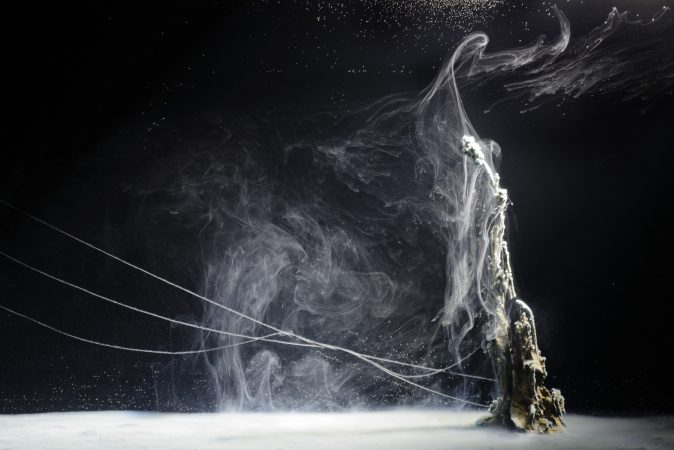 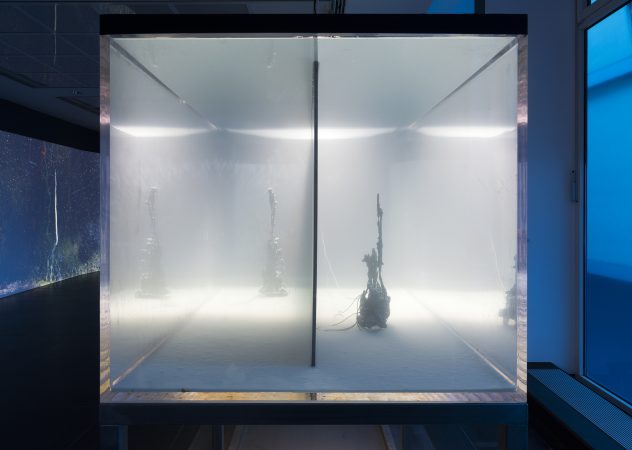 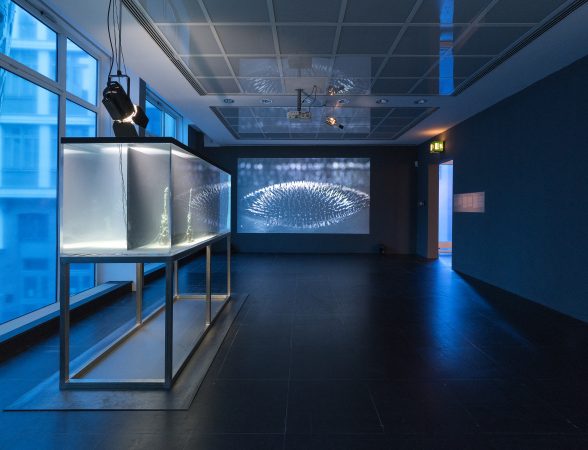 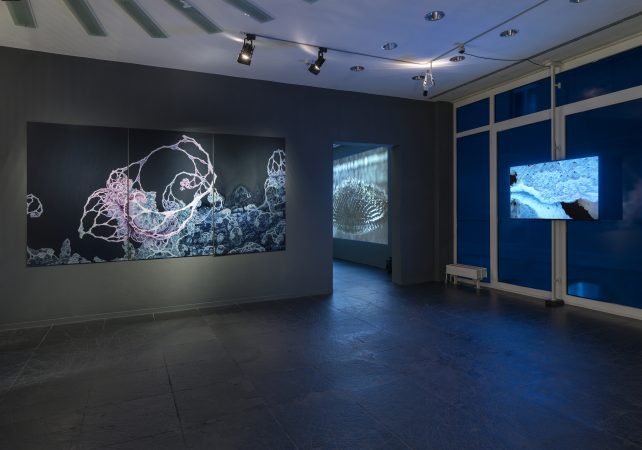 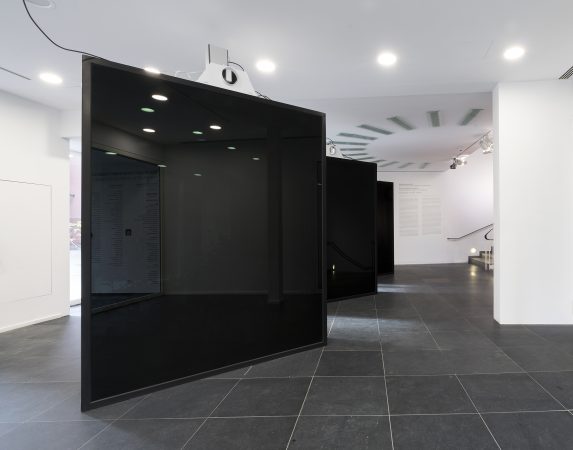 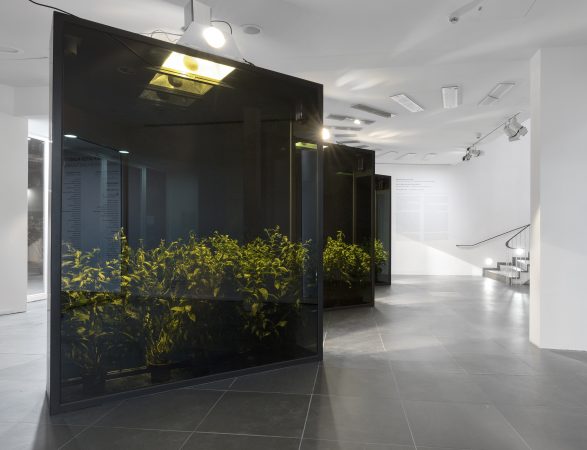 In Hicham Berrada’s work, the knowledge of science unites with the forces of poetry. The materials that make up the realities of our lives are his artistic material, whose processes and mechanisms he intensively studies through research. He uses his knowledge of the complex properties of these elements and substances to trigger their own mechanisms of action and to activate their diverse aesthetic possibilities. Like a painter, the multimedia artist creates new, multi-sensory realities that always arise within pre-defined frameworks.

The installation “Mesk-ellil” (2015) consists of three terrariums, whose black glass conceals a garden of night-blooming jasmine. The geometric monolithic structures function as greenhouses that are designed as closed systems in which the humidity and exposure to light are automatically controlled. Mesk-ellil is the Arabic name for night-blooming jasmine, a plant that is widespread in southern countries and only blooms at night, when it exudes an intense sweet fragrance. Hicham Berrada creates a vivarium, in which he has control over the plants’ living conditions. By determining the individual circumstances of their habitat, he has the opportunity to shift the perception sensors of the plants and thus invert their rhythm. Using a timer, the exposure to light is rescheduled. During the day, the glass cubes are shrouded in darkness and dimmed light casts an artificial moonlight over the awakening blossoms that begin to exude their fragrance. The glass cases are dark and visitors can only experience the plants by their scent alone. Towards the evening, 4000-watt sodium lamps simulate the sun and flood the glass cases with light, which makes the plants visible to the eye and puts them into a state of rest. With Mesk-ellil, Hicham Berrada creates a living ecosystem whose reversed day-night rhythm gives rise to a parallel world. He constitutes two states of his work that are either olfactorily or visually experienced by visitors.

Hicham Berrada uses light in his work as a pure form of energy that controls the ephemeral phenomena of natural processes. His artistic practice takes place on an ecological level, in which the processes of life are understood in their togetherness. Based on the processes that are the foundations of our lives, he shifts our perception and enables things that are self-evident to appear in a different form. The essential processes of chemistry, physics, and biology surround us permanently and are therefore never directly perceptible. In his concentrated implementation, Berrada enables us to tangibly confront these fundamental processes. Understanding the multiple and immense processes of our world is at the heart of Hicham Berrada’s artistic work.

The works named “Augures mathématiques” (2018), which were created specifically for the exhibition in the Frankfurter Kunstverein, show the journey through an abstract landscape that extends into darkness. The porous surface, which acts like a digital membrane, is the result of a mathematical process. Hicham Berrada uses four equations that mathematically represent natural principles: the equation for the branching of roots, the cumulation of clouds, the surface structure of waves, and the calculation of mass land movements. He entered these formulas into open-source software that combines the four equations and uses them to generate high-definition, complex visualizations. Infinitely calculated possibilities are interlinked to create a unlimited landscape of forms, patterns, and textures.

Hicham Berrada’s title—which loosely translates as “Mathematical Omens”—refers to the augurs who, in ancient Roman society, took on the important role of the middlemen between the world of gods and reality. They listened to the will of the deities and, as a mouthpiece of superhuman reasoning and processes, counseled the rulers and magistrates on their decisions. The fear of misfortune was great enough to listen to their advice and to adjust world events to fit their statements.

In order to understand and give shape to the universal rules and laws of the world, the sciences use mathematical formulas that attempt to make generally valid statements about natural phenomena. In “Augures mathématiques”, Hicham Berrada creates a system whose output parameters are set so that it independently generates images that arise from data structures. The result is an abstract visual landscape that does not depict and represent the world, but is based on some of its inherent connections, concentrated in the form of mathematical abstractions. The work creates a new reality before our eyes, whose relation to our immediate reality stands in contrast to the unreal formulations.

In “Augures mathématiques”, as in traditional Arabic art, mathematics is acknowledged as the most elevated of all human arts. In the arabesques and geometrical patterns of the latter, the ordering principle of our world is represented through abstraction—a force that creates and orders everything, but cannot actually be represented due to its infinitely complex and all-encompassing quality. Linguistic symbols and calligraphic elements intertwine to form patterns and reveal geometric shapes whose beauty becomes an expression of the divine ordering principle.

Hicham Berrada breaks down the concept of nature into different levels and interrogates its essence. The diverse series of works shown in “Reconnecting with the World” take place on different levels of abstraction. From concrete organisms such as living plants, to the smallest particles and molecules of our biological reality, through to the symbolic level of mathematical formulas, his works break down the mechanisms of our life into their fundamental components.

The work “Les Fleurs” (2016) depicts the struggle of two fundamental forces, whose effects appear as traces on matter: magnetic force and the wind as a physical compressive force. Nanoparticles of iron in an oily black liquid are Hicham Berrada’s starting point. The liquid forms a perfect geometric structure under the influence of magnetic force. The metal particles grow concentrically to the source and along the magnetic force field lines to form a flower-like shape. But the balance is repeatedly destroyed by heavy gusts of wind. Hicham Berrada slows down and expands the images of destruction, allowing the eye to visualize the eternal dance between striving for form, its destruction, and the struggle to find restoration. For Hicham Berrada, the experimental arrangement becomes a symbolic statement about the proportionality of universal laws, but also about basic principles of life and decay, whose processes are able to express moments of eternal truth and beauty for him.

Hicham Berrada’s work repeatedly asks questions about time. He seeks to portray distorted forms of it in order to scrutinize our human conception of life. Within carefully constructed arrangements, action sequences are temporally expanded or reversed, thus breaking our expectations of time, and exhibiting it as an abstract entity that is a purely human way of perceiving the world.
“Masse et Martyr” (2017) consists of a water-filled glass cube containing bronze sculptures. Their stringy shapes appear to be organic structures. The fragile figures were created using the lost wax technique, in which wax, under the influence of pressure and heat, follows its own movement before it serves as a template for the bronze sculpture. The form is not authored by a human hand, but rather originates in a physical process as an expression of the character of the material itself.
Cables electrify the sculptures in the glass tank and initiate an electrolytic process that oxidizes the bronze figures before our eyes in an accelerated process. In the water we see the suspensions of oxidized bronze particles enveloping the objects draw constantly changing images. Water is one thousand times denser than air, so movements appear a thousand times slower. The bronze sculptures become “martyrs” that give up their material for the greater “masse” in the glass cube. In this process, Hicham Berrada condenses the oxidation process, which would ordinarily take over 20 years, down to a duration of almost seven months. When the power is turned off, the suspension flocculates and sinks as material dust to the bottom of the glass cube. Every day, the process begins anew and always develops differently, resulting in constantly changing images of temporary transformation.

The processes that Hicham Berrada obtains from his substances are natural reactions to calculated environments. Phenomena such as suspension, oxidation, or electrolytic processes are deliberately induced by him in order to create landscapes like a painter. For the work “Présage” (2007 ongoing), Hicham Berrada builds self-contained systems that, like a stage play, combine various chemical effects and reactions to an image in time. These landscapes of materials and elements are rooted in the tradition of earlier landscape painting that depicts nature from a human perspective. While making use of scientific knowledge of elements, Hicham Berrada ultimately pursues a painterly intention. Chemicals and substances are used to create near-primordial scenarios that are made out of the basic units of our world and reflect the moment of the creation of life that still strikes us as impressive today. The images created in “Présage” generate themselves through individual materials reacting with each other and, combined together, emerge within a certain period of time and within a set environment. They are complete ecosystems that maintain an autonomous aesthetic form.

The fundamental forces of physics—gravity, electromagnetism, elementary interactions, and forces of attraction—produce all known physical processes that take place in the microcosm and macrocosm, between elementary particles and matter, on Earth or in space. In the face of these fundamental processes, the period of human existence seems infinitesimally small compared to the infinite dimensions of life. The knowledge of and fascination with the basic principles of the world is the starting point for Hicham Berrada’s artistic work, which seeks to understand them and is aware of one’s own position as part of a much larger framework.