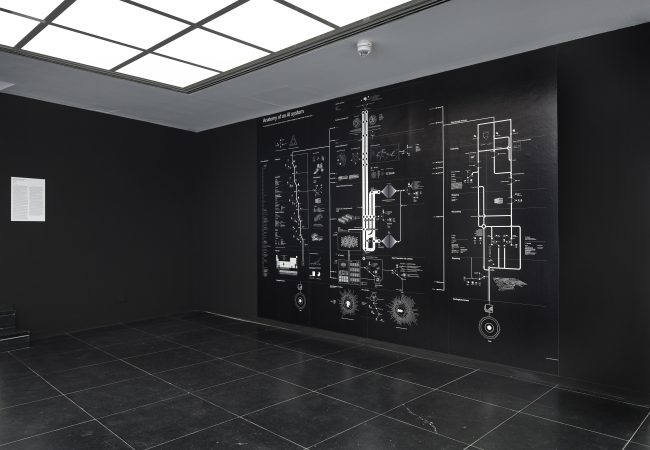 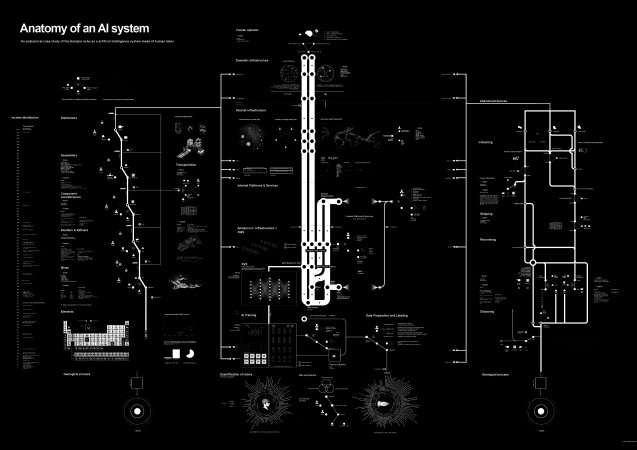 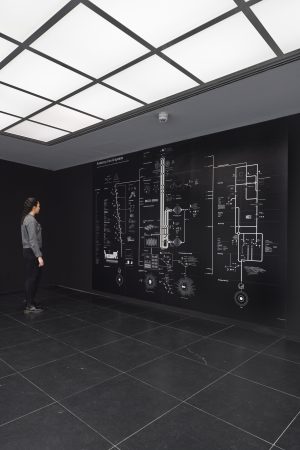 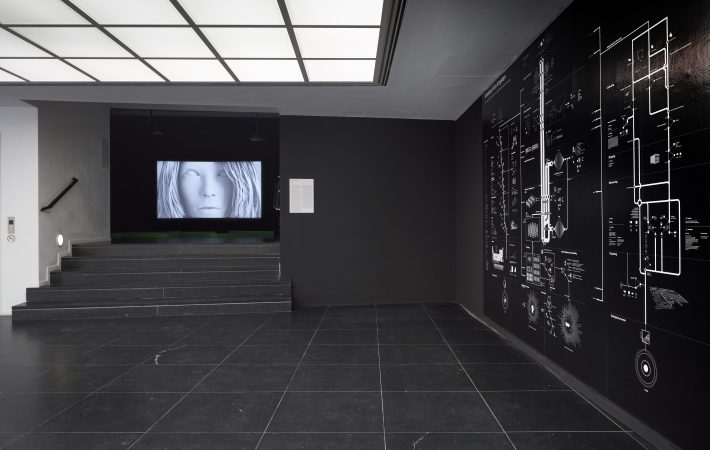 Kate Crawford is a professor at New York University and co-founder and co-director of the AI Now Institute, where she researches the social impact of data systems, machine learning and artificial intelligence. Vladan Joler is a professor at the Art Academy of the University of Novi Sad and founder of the SHARE Foundation, which deals with topics such as the transparency of algorithms, exploitation of the digital workforce, invisibility of infrastructures and technological black boxes.

“Anatomy of an AI System” is a research undertaking that consists of a detailed infographic and comprehensive essay (https://anatomyof.ai). It depicts the actual infrastructure required to deliver the result of users’ operation of smart devices, from human labor, extraction and refining of rare earths, cable networks, server farms and satellite systems to data flows.

The infographic presents an anatomical case study of the global system behind Amazon’s “Echo”. It can be read from left to right and top to bottom. From left to right, the chart visualizes three dimensions from the planet and geological process, to production, use and disposal. From the top, the map focuses on the human who gives a command to the device and leads down to quantified knowledge about our world, with which the AI is trained. Every interaction with “Echo”, no matter how small, requires an earth-spanning, invisible network.

Crawford and Joler’s research critically examines the concept of the “cloud”, which as a word, is a metaphor that evokes a disembodied, ethereal image. In reality, however, digital technologies are inextricably tied to material resources, and economic and geopolitical interests. The research establishes direct links between the exploitation of the planet and that of humans and their work.

The Amazon “Echo” device is only the user’s hardware interface. The complex functional system is outsourced to the global infrastructure behind it. Countless human workers are needed to construct, train and maintain the system: to mine minerals, produce the necessary hardware, generate training data and manually correct the AI. The production conditions are often poor, underpaid and harmful to health and the environment, whilst vast amounts of natural resources are also consumed. For example, 17 rare earths are used to produce laptops and smartphones. Elements that were created over billions of years are now squandered in devices that are often only used for a few years.

In addition to financial capital, access to data has itself become capital. Companies are capturing and quantifying ever increasing aspects of our lives, making private data a commodity. While we as consumers are analysed in all areas of life and are therefore practically transparent for corporations, they largely obscure information about themselves. But the true costs of these systems, social; ecological; economic and political, remain hidden. Thus, Crawford and Joler’s project acts as a countermeasure, rendering the invisible tangible for public perception.