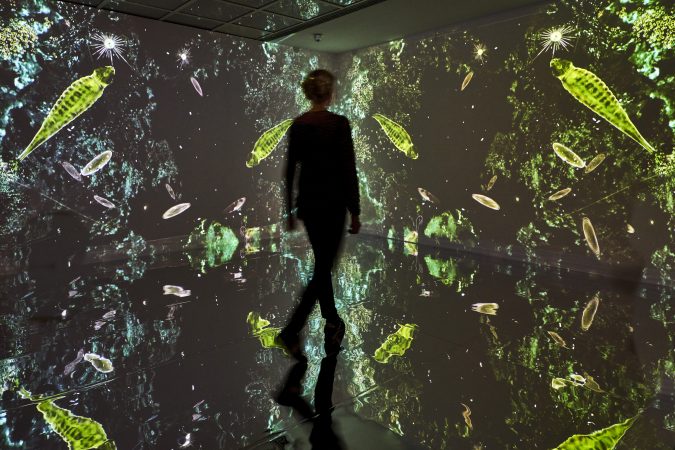 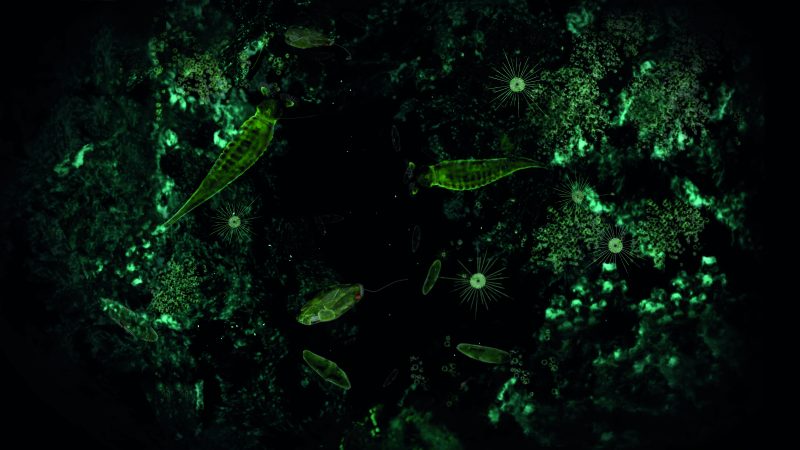 Life in a drop of water

A drop of water and the life of countless single-celled organisms contained therein come into being as an animation and immersive installation. These single-celled organisms are invisible to the human’s naked eye. Single and multicellular organisms have existed on the planet for millions of years. They developed out of bacteria and their symbiotic coexistence. According to Lynn Margulis, all other life was in turn, formed from them. Life generated further life in symbiotic fusion.

Visitors enter the world of a single drop of water and the radiolarians, ciliates, euglena, and rotifers that live within it.

Euglena, the single-cell organisms, possess both plant and animal characteristics. By rotating their whole body, euglena can detect which direction vitally important light comes from. When they live in darkness, they generally lose their greenish color. No longer able to produce their own food they feed like an animal single-celled organism and ingest bacteria. In light, on the other hand, they form sugars from simple substances using the chloroplasts distributed throughout the cell. Like algae, they can absorb light and transform it into living matter. Humans owe the fact they can see to a relation with these primeval life forms. Rhodopsin, the visual pigment in the rods of our eyes that perceives light, has its origin in our distant relationship to the primeval forms of euglena.

Radiolarians, which are also single-celled organisms, have a solid interior structure made of silica. Over millions of years, they sank down to the seabed, where they formed the solid sediment that created the matter of our world today. Ernst Haeckel studied and documented their symmetry and beauty in drawings for his postdoctoral qualification in 1861. Radiolarians can contain symbiotic algae, owing to which they can photosynthesize light. They are hybrids of plants and animals.

Ciliates are also single-celled organisms. Like humans, they are colonized by a variety of bacteria, with whom they live together in symbiosis. The symbiosis between ciliates and sulfur-oxidizing bacteria has sustained over extremely long evolutionary periods – probably between ten and one hundred million years. The bacteria provide the energy for their host, the ciliates, by oxidizing sulfur.

“No matter how much we as a species are occupied by ourselves, life is something much more encompassing: an incredibly complicated interplay between the matter and energy of the millions of species beyond (and inside) our own skin. These strange creatures on earth are our cousins, our ancestors, and part of our very self. They assimilate our substances and supply us with water and food. Without others, we cannot survive. Our symbiotic, interwoven past has been infused by a network of living water.” Lynn Margulis [from: Der symbiotische Planet – oder wie die Evolution wirklich verlief, S. 147, Westend Verlag, Frankfurt 2017.]