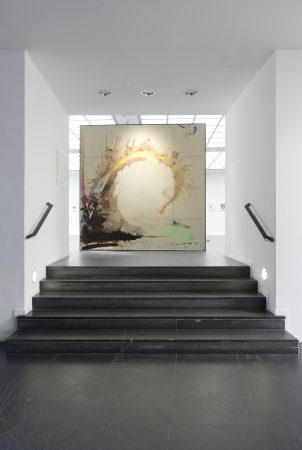 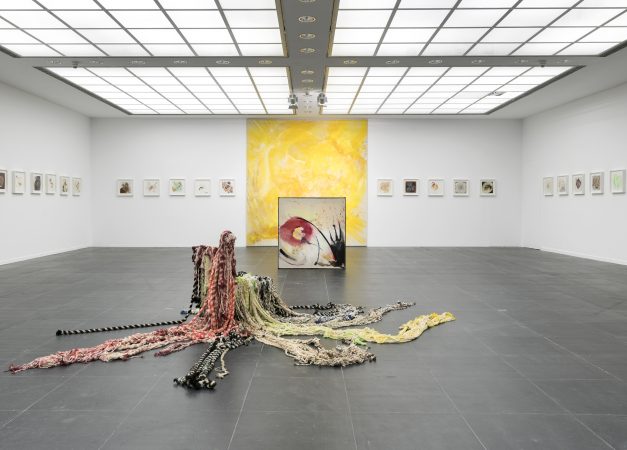 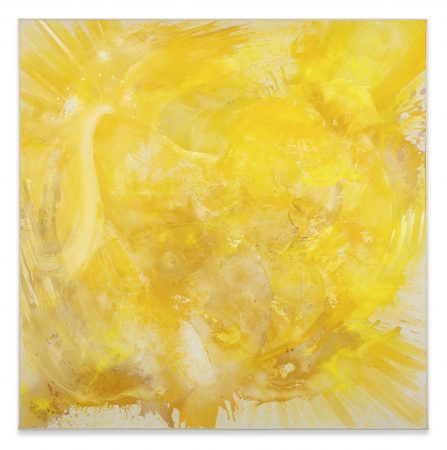 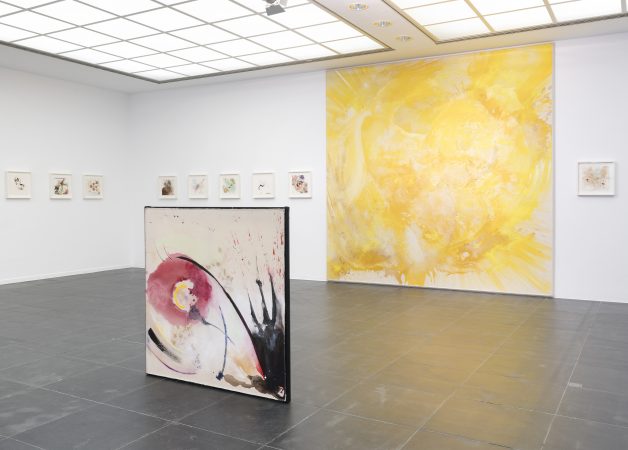 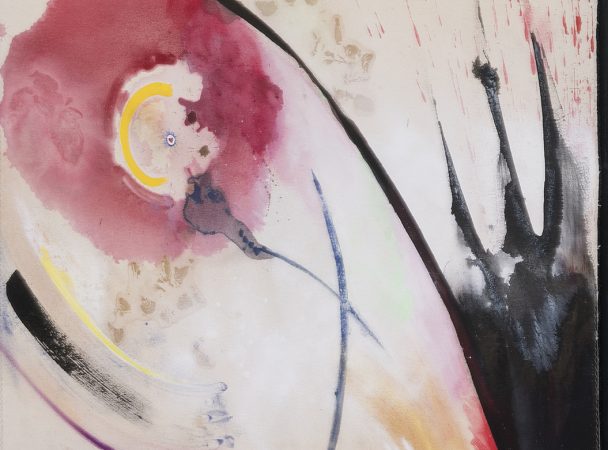 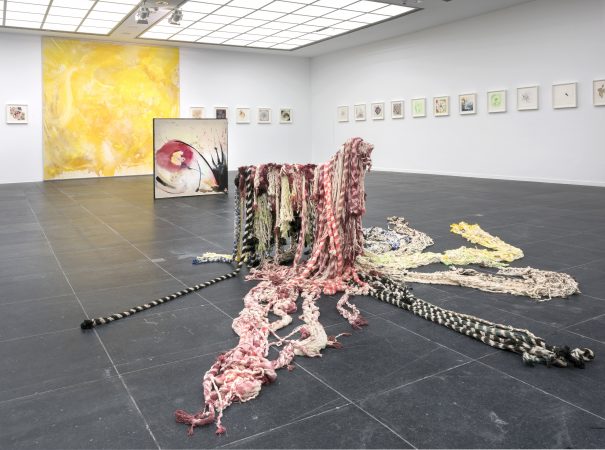 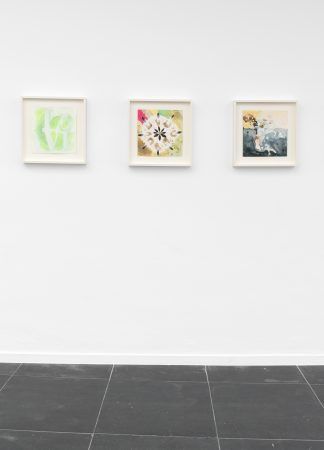 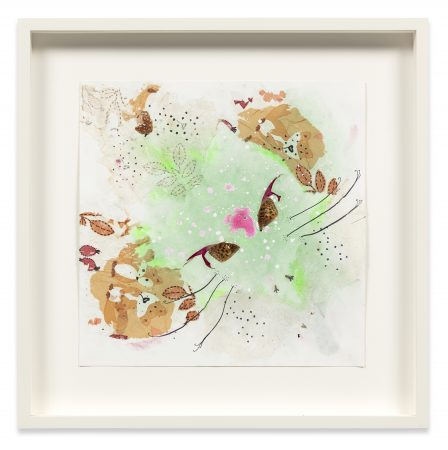 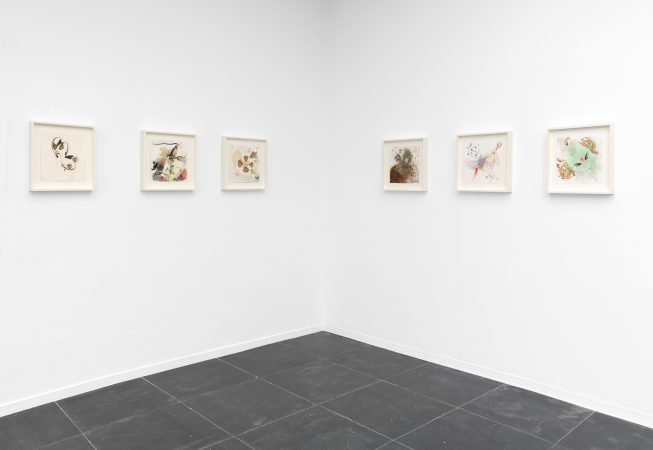 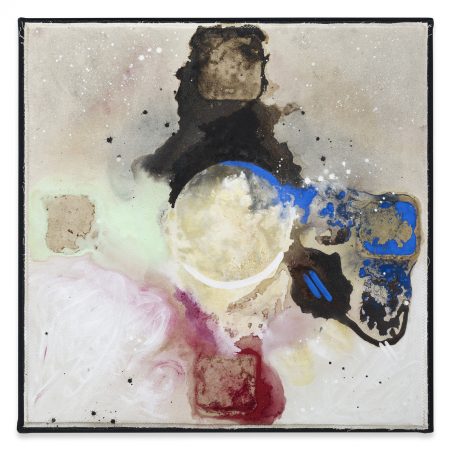 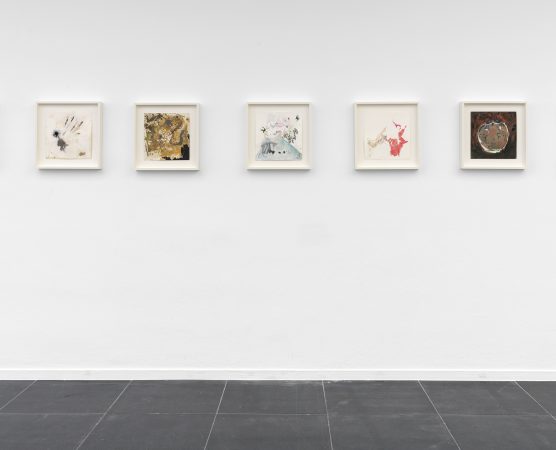 Lucy Dodd connects art and life into a singular entity that aims to give meaning to things through a spiritual interpretation of our physical existence. For “Reconnecting with the World”, the artist conceived of a specific connection between a new series of paintings and the architectural properties of the Frankfurter Kunstverein. The defining element of the exhibition space is the square, which she refers to in both formal and symbolic ways. Lucy Dodd takes up this geometric form in order to expand it into its manifold cultural and historical layers of meaning. As a framework serves a series of 45 works on paper—a selection made by the artist from a more comprehensive series—that have been created over the past ten years. Like time capsules, they represent key moments of Lucy Dodd’s life and are for the first time exhibited in this particular constellation in public.Lucy Dodd’s works consist of what makes up our world. A wide variety of painterly devices are used to produce various different colors and textures. Her materials include natural pigments such as crystals, azurite, carmine, and squid pigments, but also plant-based substances such as black walnut, avocado skins, kombucha scoby, and matcha tea that we consume as food and subsequently ingest as part of our own organism, as well as even animal and human bodily fluids.
Out of those materials emerge forms that bring whole worlds into being. Through the contact between different structures, through thickening, movement, and emotion, the canvases explore multiple levels of existence. The organic elements each produce their own visual effects which cannot be achieved through traditional means. For the most part, the resulting forms are not entirely geometric, but rather proliferate organically and are traces of the artist’s movement across the surface of the canvas. Lucy Dodd chooses her materials in awareness of what resonates with her and which things make up her immediate surrounding. This wide range of substances later used for painting is consciously selected as part of her understanding that life and art form an inseparable entity.

Lucy Dodd attributes a symbolic meaning to each element, color, and shape, which she interprets as part of a larger narrative about the essence of the world and its all-encompassing spiritual force. Feminine power is understood to be the basic principle of all living things. The image of Mother Earth as a sacred whole and source of life is expressed throughout all her works.
In their concrete existence, the paintings allow the material reality of the world to collapse into the abstractness of representation. They emerge as physical bodies that are more than just mere matter. Instead of serving as dry references, Lucy Dodd employs her material in poetic ways. She does not simply hang her canvases, but instead arranges them in the space in order to create holistic environments whose theatrical atmosphere gives the viewer the feeling of being more than just a spectator. Just like the composition of her materials on the canvas, her installations are gestures of creating worlds.

For Lucy Dodd, the specific arrangement of her works in the space is an essential part of the overall narrative. The leitmotif for all the works shown here is the square, which determines the format of the canvases and paper works, and gives structure to the composition of the installation. The center of the space is dominated by free-standing object-like canvases which are lined-up one behind the other. Their perspective vanishing point is a chair whose form emerges from under cotton threads dyed with natural pigments.
Within the spacial arrangement of the works, the viewer’s position as an active part of the reception process is the central focus. Along the axis of all the works, the view from the chair enables a central viewpoint of the installation in which the successively widening canvases fan out until a bright sun appears on “The Son” (2018) on the back wall.

Numerous layers of meaning and references merge in this constellation. The square format frames the works in the strictness of a geometric shape that does not exist in nature and is created by humankind alone. The form, consisting of four sides, symbolizes the feminine princi-ple, which is represented by the number four in numerology. In Pythagorean philosophy, the square is a symbol of the combined work of the four elements and at the same time a symbol of the interaction between the four female deities Aphrodite, Demeter, Hestia, and Hera; the goddess Rhea was seen as the fusion of them. In many cultures, architects built sacred spac-es—whether the Egyptian pyramids or the early Christian cloisters—in the basic shape of the square, as their regular sides was associated with magical powers.
The circle is closely related to the square, from which both an outer and an inner circle can be drawn. Leonardo da Vinci presented the proportions of the human body according to the ideal dimensions formulated by the architect and engineer Vitruvius in both of these shapes. Lucy Dodd’s painting sequence culminates in the dominating representation of the sun that celebrates the creative power of the star in radiant yellow and ochre colors made from cadmium and onion peel. In all cultures, the paramount importance of the sun in structuring the entire cycle of life through its own daily reoccurence was expressed through deity-like worship.

Two of the central references of the new series of works—the celestial bodies of the sun and Mars—meet in the paper work “Exhibition Poster” (2018). In Greco-Roman mythology, the god of war Mars is one of the major deities who represents the warlike force that simultaneously destroys and creates new things. In the Roman calendar, Mars serves as the namesake for the month March, which is when winter ends and nature restarts its vital cycle. Mars’ attributes are the spear, the helmet, and the shield; blood is also symbolically assigned to him, which is represented in the color red using the mineral hematite. The symbol for Mars is a circle with an arrow pointing up and to the right—an element that is echoed in the radial extension of the chair. Lucy Dodd connects the months in which she created the new work cycle and was also pregnant with her second child with a time when Mars reentered her astrological cycle after a long period of absence, where he stood for will, drive, and strength.
45 drawings form a horizon line on the wall, which, like a sequence, tell the story of Lucy Dodd’s life step by step. The paper works selected from the artist’s personal possession act as a narrative of the events of the last ten years.

Lucy Dodd’s work is shaped by her holistic view of existence, in which the feminine, as a vital force, connotes a reconnecting with the world. It is a question of giving meaning to things and naming what makes up our existence. These points are linked together to create an explanation for the big picture.
She captures monumental material processes and natural phenomena on canvas, charging them with the energies of these elements to expand the senses and to comprehend how humankind establishes relationships with its environment. As a theater of meanings and materials, her works make it possible to understand organic substances as being charged with energies. The network of symbols and metaphors animates the organisms and materials involved in the works and mobilizes their poetic potential. In the cosmic explosions of colors and material, symbols such as flowers, moons, and stars are hinted at, opening up the way to mythological world narratives that humankind have been trying to use for centuries to explain the meaning of their own existence. In the abstract gestures of her painting, Lucy Dodd designs symbols that express a life with the environment in which these elements are not considered as exploitable ressources but rather spiritual anchor points.