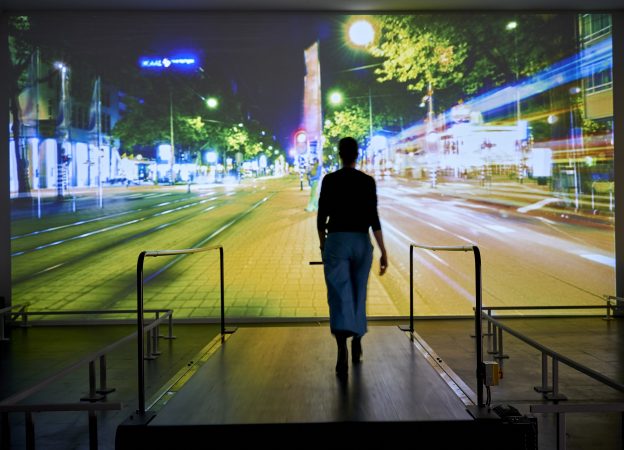 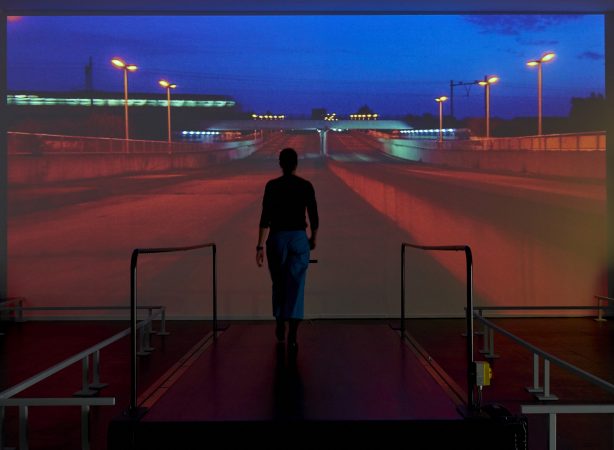 In his works, multimedia artist and sculptor Marnix de Nijs (b. 1970) investigates the effects of interactive technologies on the viewer’s sensory and bodily perception. His work brings the human body into a direct relationship with machines by allowing the body to experience itself as an extension of machines and intuitively decide how they are physically used. In the interactive installation “Run Motherfucker Run”, the user runs on a sort of treadmill in front of a projection that occupies the whole field of view. Only through their physical actions can viewers activate the various 3D scenarios and decide which one they want to follow.

The installation directly couples the physical act of running with the interactive visual world and its acoustic landscapes. The projection shows a combination of film and 3D images of a gloomy, urban Rotterdam. Various night-time scenes appear, and all lack the faintest human presence. Via the technological transmission of their movements, the user becomes their own interface. In the spirit of McLuhan, Marnix de Nijs’ treadmill becomes an extension of the human body.

The installation aims at a bodily experience between digital and analogue as well as dissociation between mind and body. The tempo at which the viewer uses the treadmill has a direct impact on the intensity of the aesthetic experience. The physical exhaustion is real and experienceable, though the effect is only visually simulated since the viewer doesn’t cover any ground. Who’s driving who? Can cause and effect be clearly distinguished here in the relationship between man and machine. The feeling of being on the run is a main element of the experience and epitomizes the feeling of imminent danger. Should the user unexpectedly stop running, the treadmill won’t, and will subsequently throw the user to the ground. Speed and risk become bodily sensations and are a central part of the experience.

The Dutch installation artist Marnix de Nijs (*1970) lives and works in Beijing (CN) and Rotterdam (NL). He graduated in Sculpture from the Arnhem Institute for the Arts. In 2013 he has been awarded at Prix Ars Electronica in Linz (AT). He is a pioneer in researching the experimental use of media and technologies in Art.