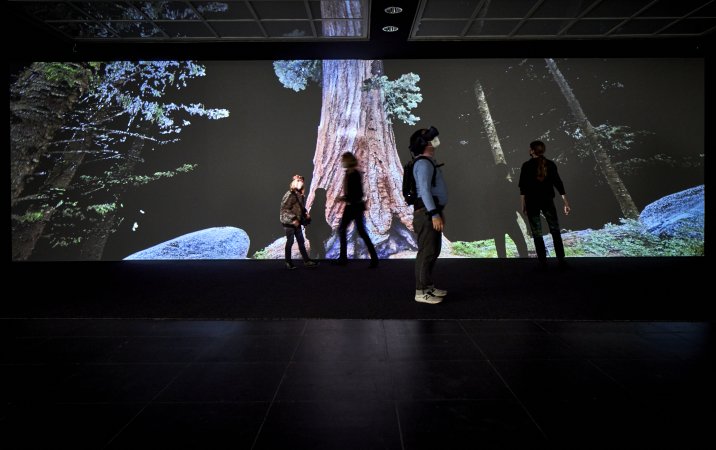 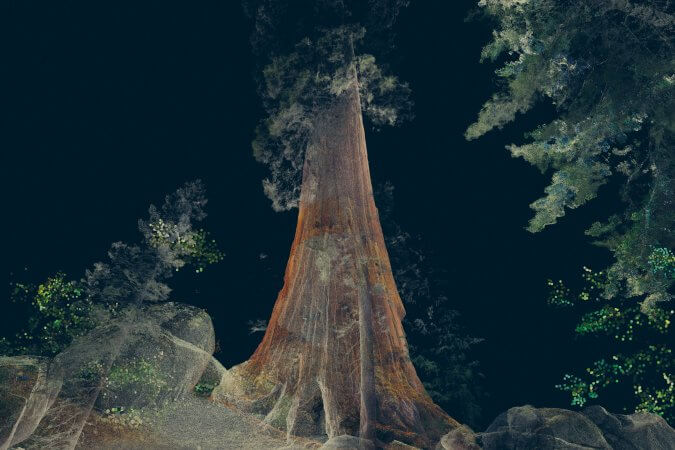 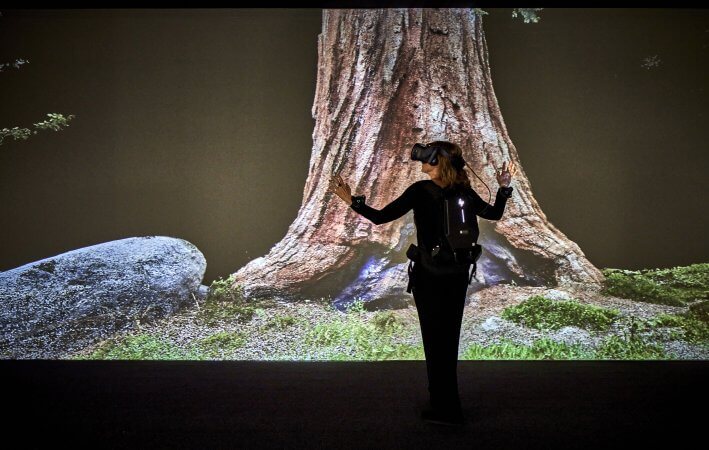 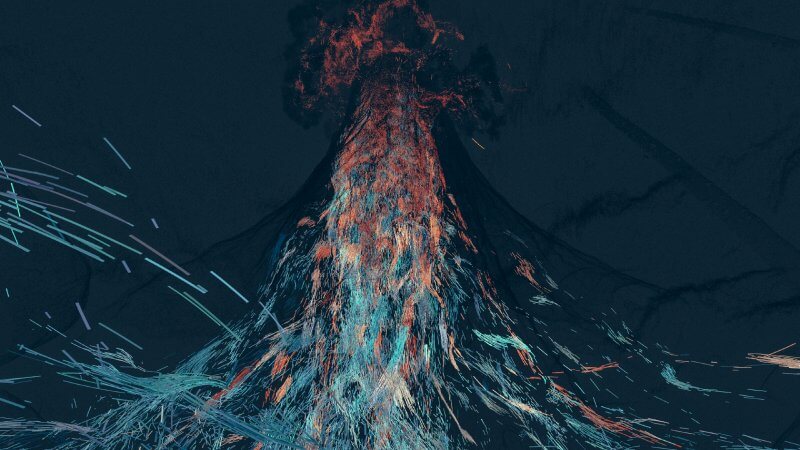 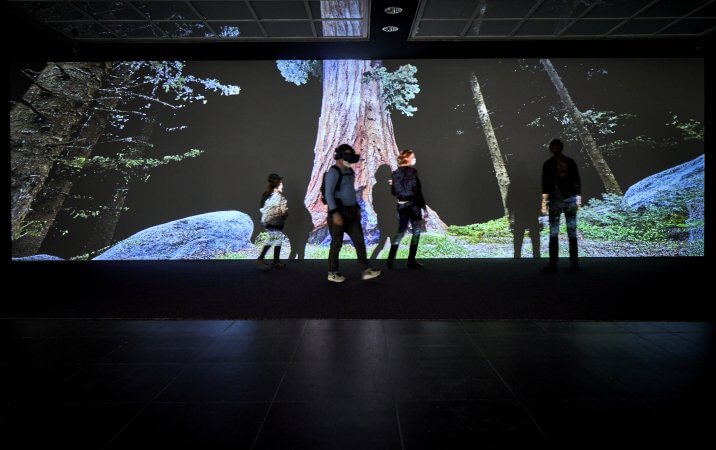 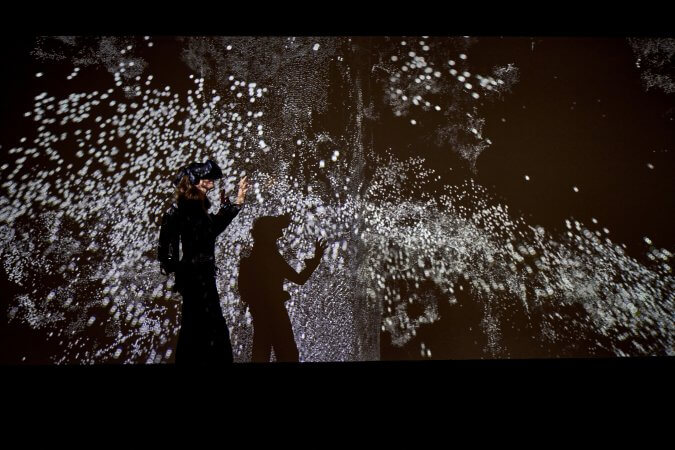 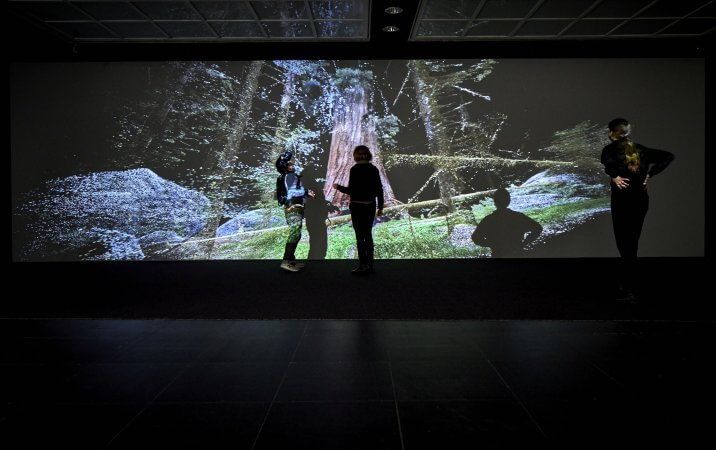 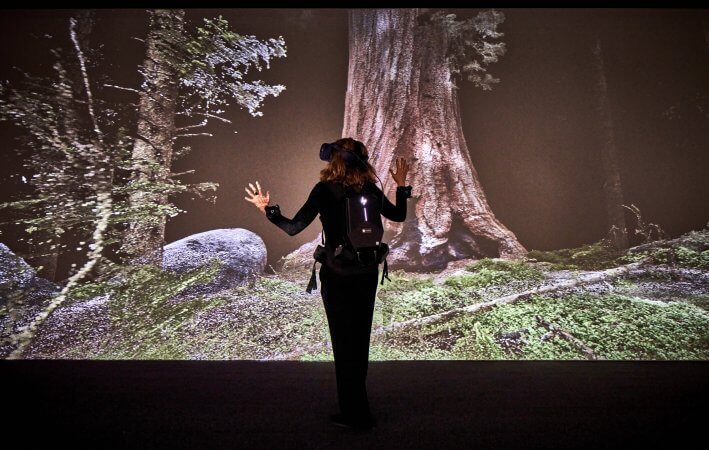 Marshmallow Laser Feast (MLF) is a London-based collective of artists working at the intersection of science, art and technology, using a range of creative disciplines from installation to kinetic sculpture, film and live performance.

Much of their work explores human perception through the use of innovative technologies. With Treehugger: Wawona, the collective produced a multimedia virtual reality installation that focuses on a giant sequoia (Sequoiadendron giganteum), one of the oldest trees on the planet. Visitors put on the data glasses and change the human perspective to follow the metabolic cycle of a drop of water on its way into the ground and from there into the roots to the tree crown.

The giant sequoias in Northern California reach a size and age where human imagination reaches its limit. They are the largest single organisms on earth. They can grow taller than a ten-storey building and live for more than three thousand years. The more we know about them, the more questions arise. The fascination of these special creatures has inspired numerous authors. Richard Powers’ novel The Overstory (2018), in which trees become the protagonists of a cross-species plot, is particularly groundbreaking.

The giant sequoia from Treehugger: Wawona is a real tree in Sequoia National Park in California, USA. Wawona is the native American word of the local Miwok for “hoot of an owl” and onomatopoeically imitates the sound of the spotted owl, which is considered the spiritual guardian of the tree.

In collaboration with leading researchers from the London Natural History Museum and the University of Salford, Treehugger: Wawona used a combination of the three-dimensional laser scanning system LIDAR, white light and CT scanning to create high-resolution textures. The digital representation creates a distortion of the usual human perception of space and time and makes the invisible visible. For Treehugger: Wawona, scientific data was used to create a graphic simulation of how water and carbon dioxide flow through the tree. In the VR experience, users experience the metabolic processes taking place in the tree in a temporally accelerated way. Through the power of immersive technology, an experience can take place in which the user overcomes the limitations of their own human body to empathise with that of the tree. A transfer of experience can take place, an empathic transference of the self to another being.

The soundscape extends the scientific data by acoustically reproducing the vascular system of the tree. The capture of biosignals was generated via the representation of data into sounds via hardware and software co-developed by sound artist and environmental designer Mileece I’Anson. The bioacoustics of the Sequoia National Park are audibly represented via a binaural soundscape of the tree – this is created when a separate sound with a slightly different frequency hits each ear. For this, the soundtrack of birds, insects, amphibians, rain and wind was mixed in a sound weave to create an immersive sound field in which visitors can move around.

One of the concerns of Marshmallow Laser Feast, in the face of an increasingly urgent ecological situation, is to help people leave their anthropocentric view and, thanks to their artistic work, put themselves in the place of another, non-human being.

Marshmallow Laser Feast (MLF) is a collective based in London (UK) collaborating with artists, engineers and scientists, building bespoke software and hardware systems to realise their visions. MLF has designed and directed We Live in an Ocean of Air (2018) and In The Eyes Of The Animal (2016), which won the Wired Innovation Award. Most recently they won the Tribeca Storyscapes Award for Innovation in Storytelling at the Tribeca Film Festival (US) and Best VR Film Prize at VR Arles Festival (FR) for TreeHugger: Wawona. Their work has been exhibited around the world including Lisbon Trienniale, Lisbon (PT), STRP Biennial, Eindhoven (NL), Yamaguchi Center for Arts and Media, Yamaguchi (JP), Sundance Film Festival, Park City (US), Tribeca Film Festival, New York City (US), Barbican Center, London (UK) and Istanbul Design Biennial, Istanbul (TR).