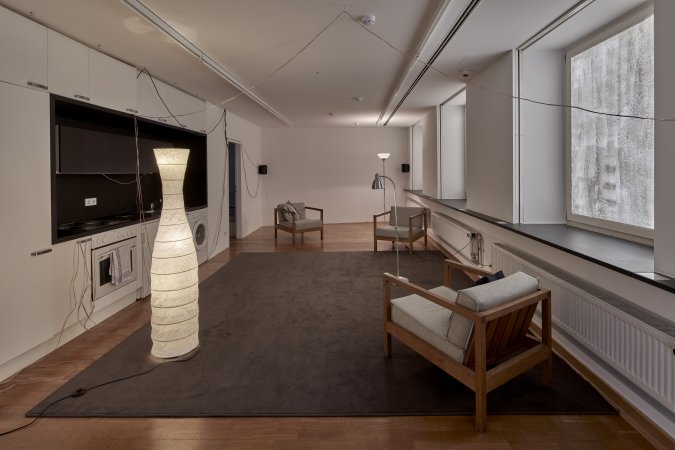 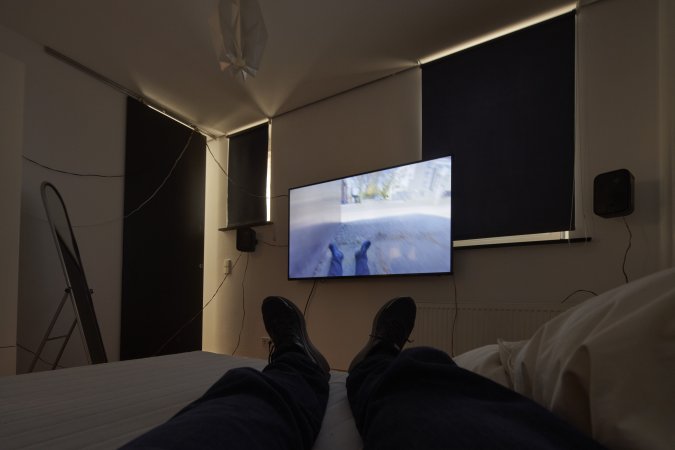 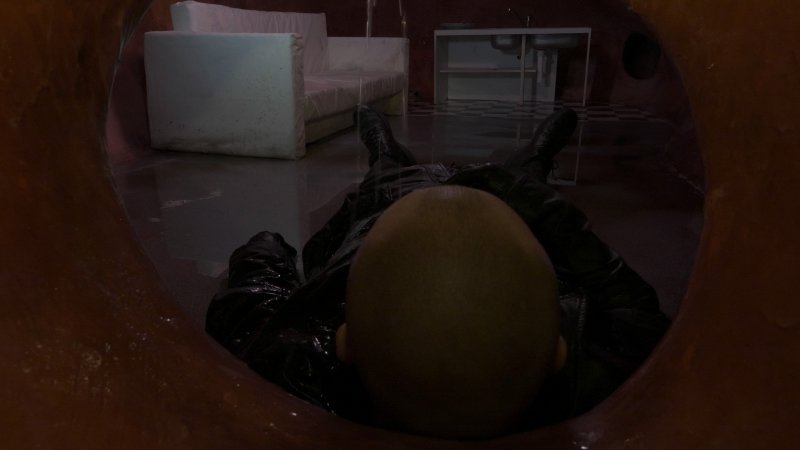 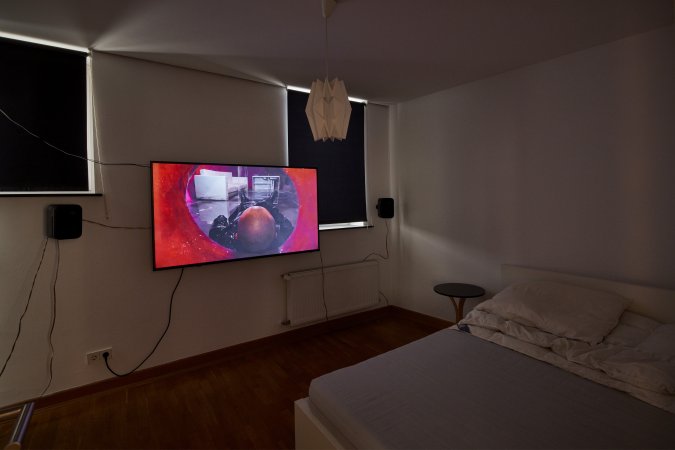 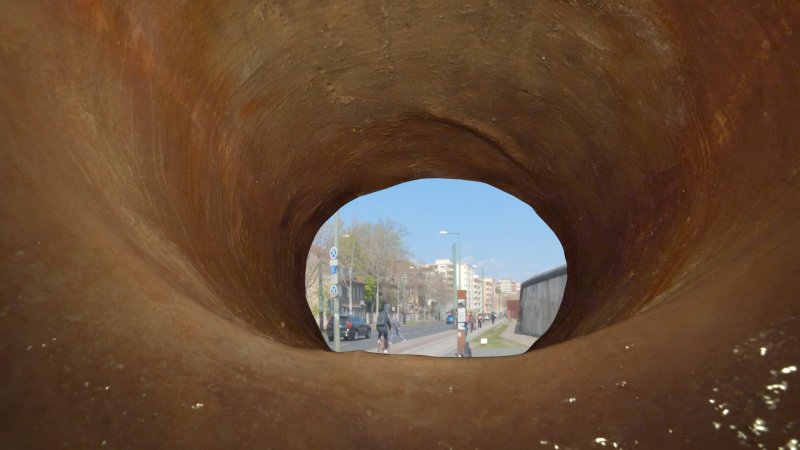 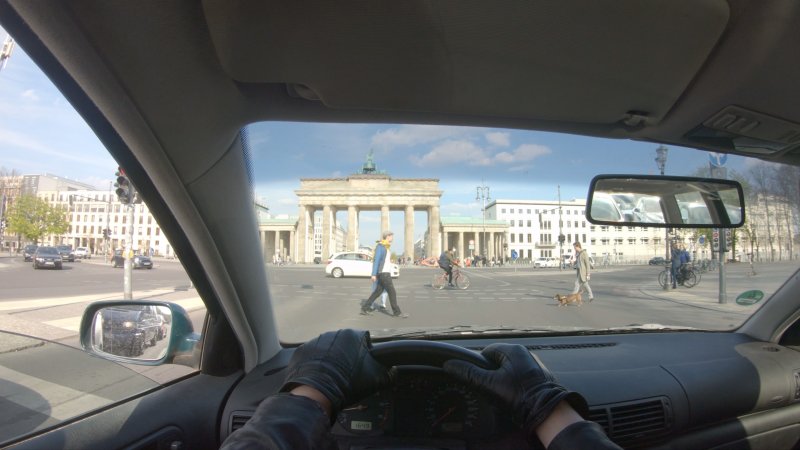 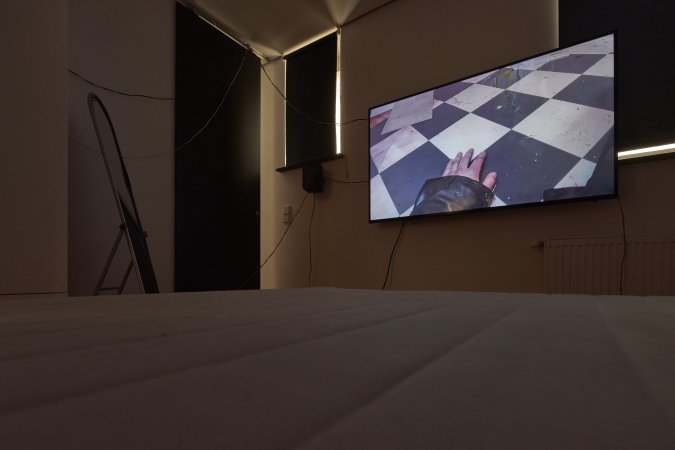 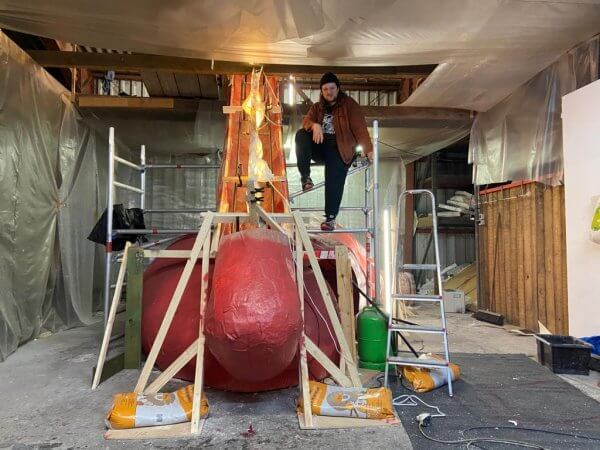 Matt Welch in his studio at the set of his film "The Secret Millionaire Part 2 – Sense of Doubt", 2021, Photo: Wolfgang Winter

Matt Welch works in sculpture, drawing and film. His new film, trilogy Sense of Doubt, produced for the exhibition And This is Us 2021, is envisaged as the second part of the trilogy The Secret Millionaire.

In Sense of Doubt, Welch weaves together numerous references to films and music related to the Berlin’s past and its symbolic interpretation. This includes images and memories of his own time living in Berlin and the stories of a German friend, who fled from the GDR to West Berlin in 1984.

The film is shot entirely in subjective camera angles corresponding to the gaze of the main character in the film, and take place on three different levels. We see through the eyes of the male character as he drives through contemporary Berlin in a seemingly aimless car journey, listening to his inner monologue, the memory of formative experiences of alienation and exclusion; we experience him walking through streets, following the instructions of an inner voice, like that of a director. Finally, the camera glides through a red, wet, sore tunnel. The passage, both a gullet and a sewer, serves as a transition between the outside world and the inside, a membrane between a conscious and an unconscious perception of the world.

The figure in the film walks among the non-places of an altered urban environment. The architectures of Berlin become stage sets for a contemporary production. The remains of the Wall and the former death strip between East and West have become a no-man’s land in which the protagonist searches for ways out and cover, as if in a cage. An atmosphere of exhaustion and despair and the lack of a clear direction condenses.

Again and again in Welch’s work, the stomach appears as a metaphorical form. Welch speaks of the organ as a biological equivalent to the urban infrastructure of a waste system, a hidden place of processing, absorption and disposal. The camera descends into the depths of the body and its interior, penetrating an underground, a dark space that symbolically serves as a shelter for the protagonist.

For the presentation of his work, Matt Welch has chosen a space in the Frankfurter Kunstverein lying outside the regular domain of museum visitors, a flat used for artist residencies. Welch gives the rooms the appearance of an anonymous Airbnb residence where one can withdraw without the place reflecting one’s own identity.

Sound plays a central role in both rooms. In the living room, piano music echoes, in the bedroom, where the film is shown, we hear the inner voice of the acting character. The songs are instrumental arrangements of tracks from David Bowie’s albums Low and Heroes. Bowie composed and recorded these albums as parts of his Berlin Trilogy with Brian Eno. Having fled from Los Angeles to Berlin to escape his drug addiction, here Bowie was able to live relatively undetected in the city with Iggy Pop, his neighbour, going to underground clubs and bars untroubled by fans or paparazzi. The piano interpretations at the Frankfurt Kunstverein pick up on Bowie’s synthesiser instrumentals and reinforce the film’s atmosphere of loneliness and melancholy.

Sense of Doubt is dominated by a mood of diffuse anxiety. The flowing alternation between the observation and scanning of the world in its appearance and the perception from the internal view of the stomach level dissolves the categories of inside and outside, central and peripheral. The inner monologue is the link in which the thoughts and feelings of the narrator are conveyed to the viewer in an atmospherically dense manner.