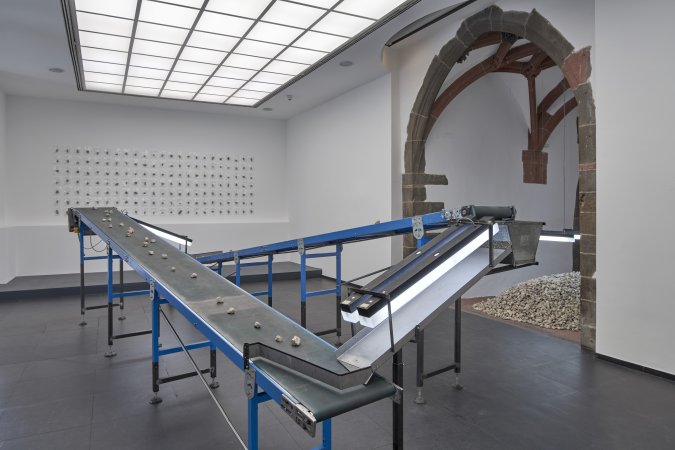 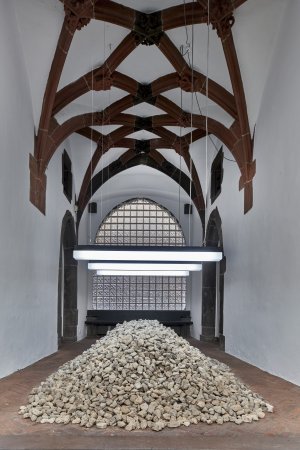 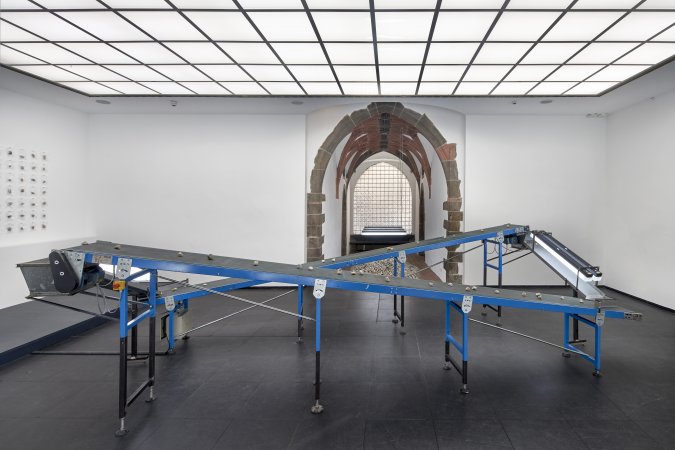 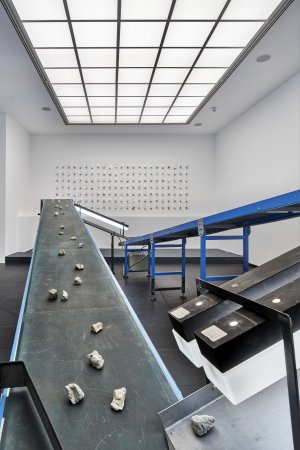 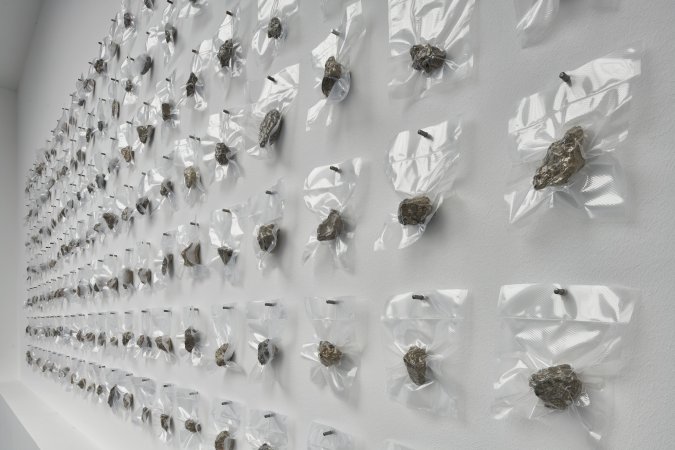 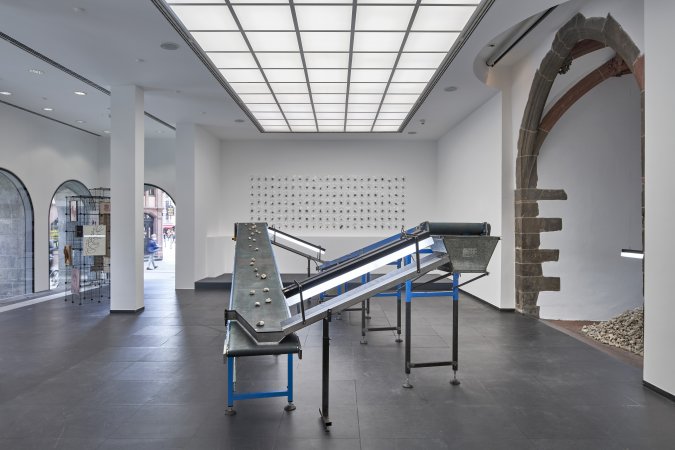 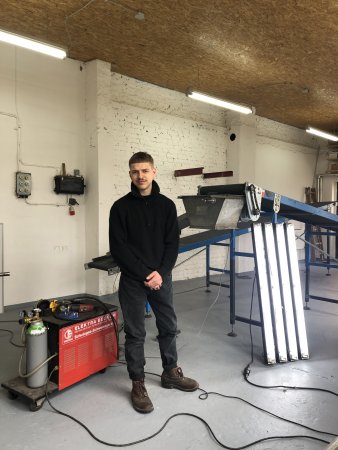 Max Brück in his studio working on his sculpture Kreislauf, 2021, ©Frankfurter Kunstverein

Max Brück’s work deals with the question of how collective memory is created and what material might make this visible. What remains when a city and life in it changes? What shapes the identity of a city and how does it change?

For the installation at the Frankfurter Kunstverein, Brück looked at the institution’s immediate surroundings, Frankfurt’s new old town. Brück’s research focused on the Technical Town Hall, a 1970s brutalist building that adjoined the Frankfurter Kunstverein. The architectural conception in the formal language of modernism, its geometric form, the exposed concrete material and the building’s function as the seat of the city administration, stood for a historical moment in which the break with the immediate German past was to be demonstrated in urban planning terms. The demolition of this building in the 2010s and the reconstruction of the historicised old town on a medieval street plan ignited fierce and controversial debate about architecture as a symbol of collective memory and social identity.

Just as historical set dressing was attached to the façades of recreated buildings in the New Old Town for commemorative celebrations, Brück returns the once disposed of rubble of the demolished Technical Town Hall to its original location.

Max Brück goes back to the materiality of history. For the site-specific installation Kreislauf, he contacted the company that demolished the Technical Town Hall. The remains of this demolition are still stored on the outskirts of the city today, since the concrete – once an ideologically charged material – was crushed to be recycled as a new raw material. As a component of recycled concrete, it is used for new buildings, and the New Old Town itself stands on a layer of gabion baskets in which the rubble of the Town Hall forms the foundation.

Brück illuminates the fragments of the Technical Town Hall with lights taken from the cycle of constant renewal, lamps from a dissolved archive. As often in his works, the artist makes use of discarded, once functional objects and instruments that are becoming obsolete in a society of constant and ever faster technical renewal.

On one hand, the question of the emergence of memory, and, on the other, an interest in future-oriented strategies such as urban mining characterise Brück’s work. Urban mining is a new, sustainable method of extracting raw materials. By this process, materials available in cities in particular can be fed back into production processes.

Brück deliberately chose a controversial landmark in Frankfurt’s inner city that continues to spark emotional and ideological debates to this day. The conveyor belts and material chutes, which form a circuit, transport the stage props of an already forgotten inner-city landmark in a constructed deceleration. The artist vacuum seals the individual stones for storage, preserving props that visitors can take with them as souvenirs. A first, visible cycle is created in the exhibition space, which becomes an extended, ideal cycle of collective memory through the participation of the visitors. The individual stone, the fragment, refers to a former larger whole that is only remembered through language and the narrative of what has been, and thus acts as a symbol for the negotiation of identity in a society.

Max Brück (*1991, Schotten, DE) lives and works in Offenbach am Main (DE) and Gießen (DE). In 2018 he graduated with special honors from the University of Art and Design in Offenbach (DE) with the subjects space, sculpture and sociology with Prof. Heiner Blum, Prof. Susanne Winterling and Prof. Marc Ries. From 2015 to 2016 he completed a semester abroad at the Academy of Fine Arts in Warsaw (PL). He won numerous awards such as the travel grant of the Hessische Kulturstiftung, the Künstlerhilfe Frankfurt and the working scholarship of the Stiftung Kunstfonds. The artist has exhibited with the following institutions (selection): Kunstforum der TU Darmstadt, Darmstadt (DE), The Watch, Berlin (DE), Kunst- und Kulturstiftung Opelvillen Rüsselsheim, Rüsselsheim (DE), Bistro 21, Leipzig (DE), Hafenhalle, Offenbach am Main (DE), Neuer Gießener Kunstverein, Gießen (DE), StudioNAXOS, Frankfurt am Main (DE).