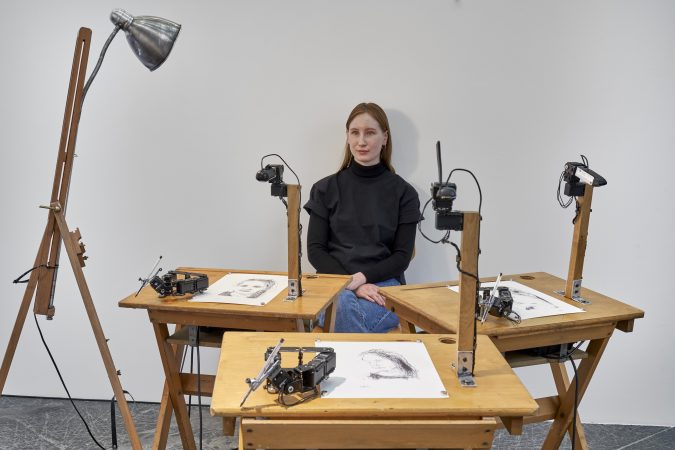 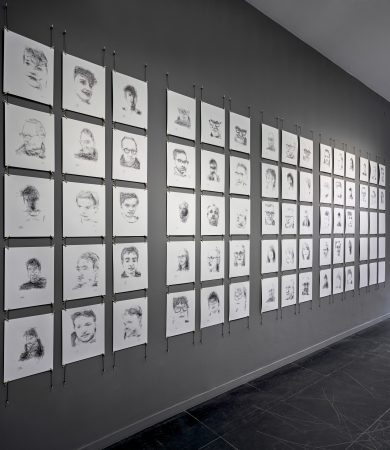 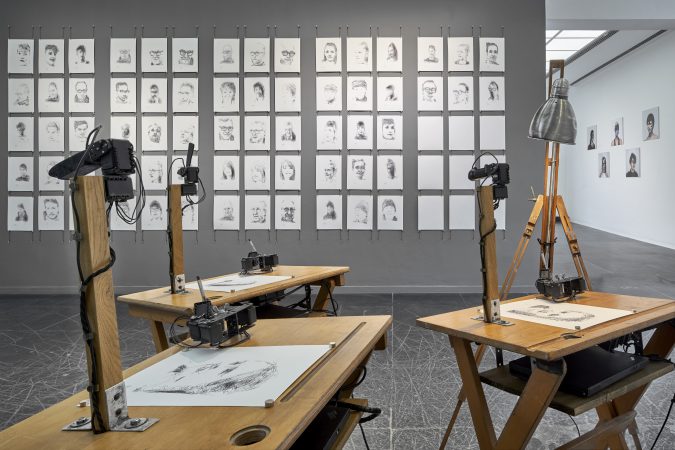 Patrick Tresset’s interactive installation Human Study #1 consists of three drawing robots. Visitors can sit as models to be visually recorded and portrayed by the three machines. Each of the three robots draws in their own style and handles the pen in a different way. Alongside the drawing arm, each robot is equipped with a movable camera. They use these to alternately observe the model and the resultant drawing. Tresset isn’t interested in using the robots to simulate a human drawing style. Rather, he examines the differences between human and robotic execution. Tresset describes his machines’ abilities as “non-intelligent.” They only give the impression of acting of their own volition. They demonstrate human-like behaviour, which is nonetheless based on a programme that only stipulates a restricted set of actions.

Nevertheless, the machine’s actions, much like those of humans, are essentially bound to its corporeal form, its perceptual system, its ability to remember, and its motoric idiosyncrasies. Its embodiment essentially determines its actions and the kind of drawing it can produce. Tresset makes no attempt to artificially compensate for the mechanical movements, preferring to leave them as such so that the mechanical method of production remains recognizable. The work raises the questions of authorship in the digital era – a time when the ability to produce cultural artifacts has expanded to include learning systems. In his drawings, Tresset tries to capture the human in lines. To these ends, he uses automated drawing machines. These machines cannot understand their own activities: they have no notion of art and are unable to perceive their drawings as such. Tresset’s work thus addresses the questions of which conditions a work has to fulfil in order to be considered art and whether art has to be entirely produced by a human author.

French, London-based artist Patrick Tresset creates installations that investigate the human perception of robots. His work has been exhibited in major museums and institutions such as the Centre Pompidou, Paris (FR), the Museum of Modern and Contemporary Art, Seoul (KR), the Prada Foundation, Milan (IT) and at events such as Ars Electronica, Linz (AT).