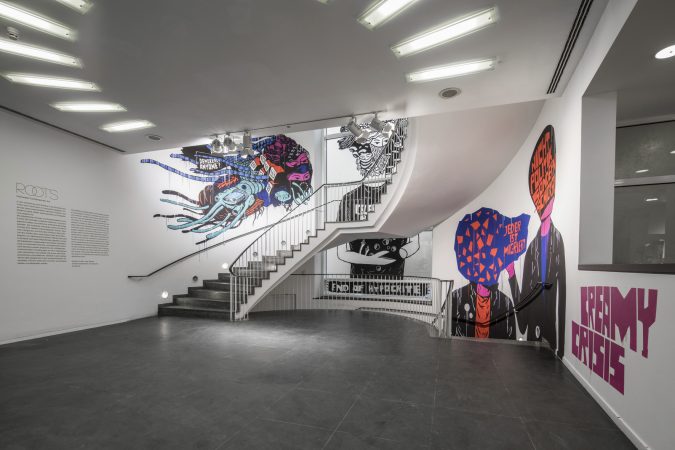 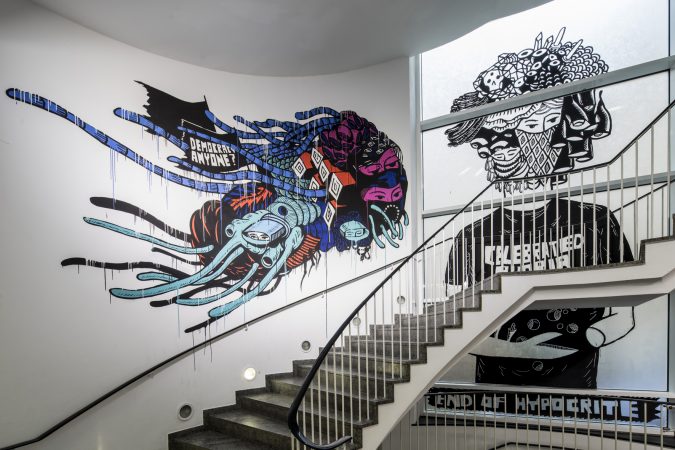 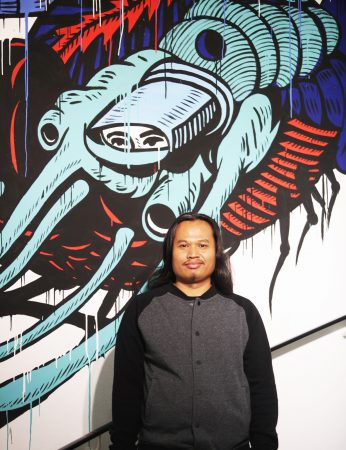 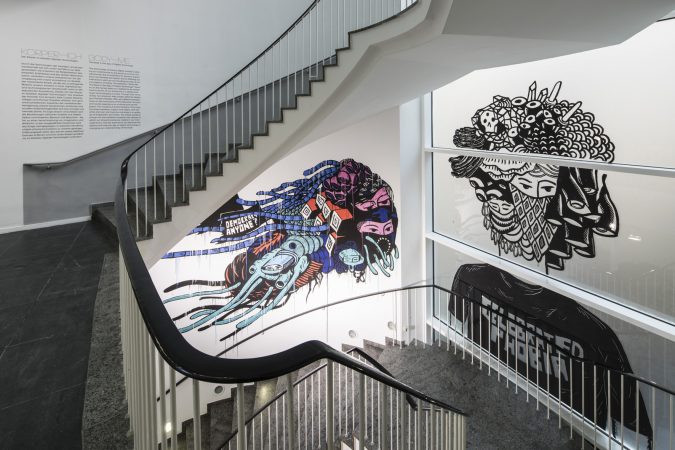 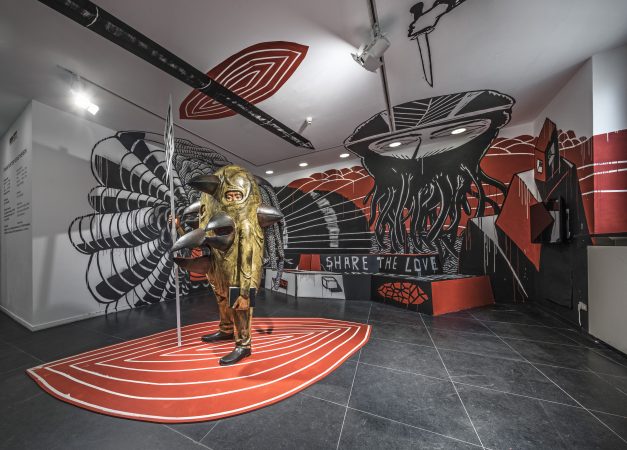 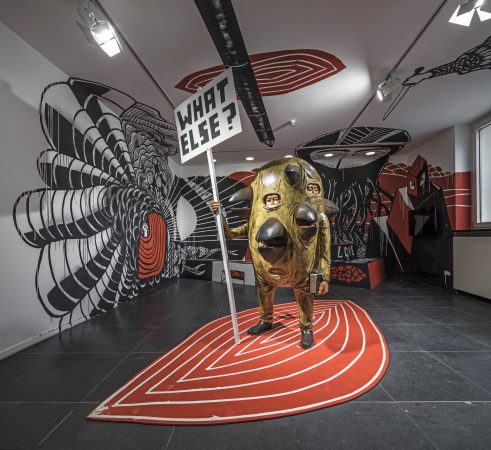 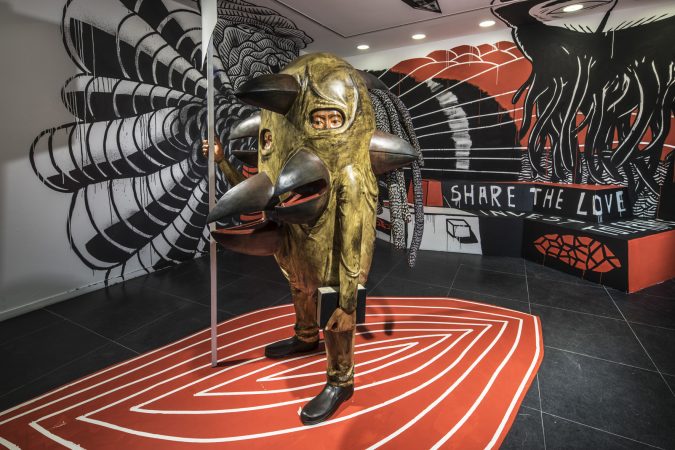 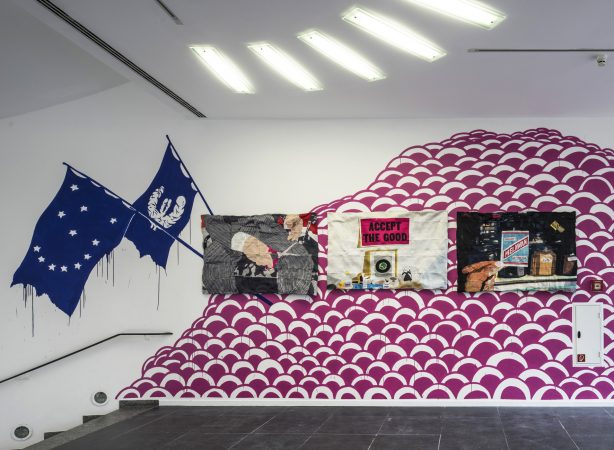 Eko Nugroho entered the Yogyakarta art scene at the beginning of Reformasi (1998-2001), or the early period of democratisation in Indonesia. Though trained as a painter, he emerged as a key member of the diverse community of street artists in the city. With increased freedoms of speech in a post-Suharto Indonesia, the streets became open galleries and open forums through which to directly re-engage the urban environment. Since then, Nurgoho has continued exploring different approaches to the production of art and his notions of his creative labour in relation to ideas of public space, collaboration and community. For over the past decade, he has worked with local communities throughout Asia, Europe, and the United States not just as an initiator, but also as a facilitator working on principles of dialogue, communication and negotiation. Nugroho has not collaborated with a community in making his immersive environment for this exhibition. Instead, the audience is immediately immersed in a world of the artist’s own making. However, Nugroho’s process retains elements of his experience as a street artist and collaborator. He must consider his relation to the space and understand its local context before he decides on what ideas and visions might spark a conversation. Hence, his mural has unfolded as a result of his response to the art space and exploration of a bit of its local environment and context in Frankfurt. It is a fleeting work, meant to be understood as an event that cannot be reproduced.
Much of Nugroho’s artistic practice is the result of his longstanding concern over the democratising potential in technologies of reproduction, in the production and dissemination of art and its accessibility as a potential instrument and space of communication. These, including his open gallery on paper, Daging Tumbuh (DGTMB), can be seen as just one aspect of his network of local creative industries in Yogyakarta.
Like many artists in Yogyakarta, Nugroho integrates craft in his contemporary art practice. In this exhibition, pieces of embroidery have been selected from a larger series, “Street Talk”. Here, images taken during his many travels in which he recorded everyday politics and human interactions have been translated into large scale embroideries. Embroidery has a long history in Indonesia. It is associated with traditional cultural production, with emblems of status, as well as with expressions of modern identity whether individual or collective. Nugroho has worked collaboratively with artisans like Mas Rinto for many years in developing a manual (rather than digital) technique to translate the visual and material languages of photography and painting into embroidered works.
As can be seen from his work in this exhibition, Nugroho’s art has its roots in comic books. He combines their symbolic language and logic with a typically Javanese strategy of satirical and dark humour to examine political and social situations and human relations. His constructed world is populated with personal symbols of a humanity transformed by external influences, mutated into hybrid, half-human/half-machine beings. This can be seen in “Traveller”. Here, the traveller (tukang dholan) is an aimless wanderer, a kind of magpie who is easily distracted. Its multiple beaks imply incessant chatter, and hence an inability to listen. Similar to Jompet Kuswidananto’s work “Power unit” also shown in this exhibition, “Traveller” can be seen as the artist’s interrogation of how democracy and democratic society has come to be (or not be) defined in a post-Reformasi political discourse in Indonesia.