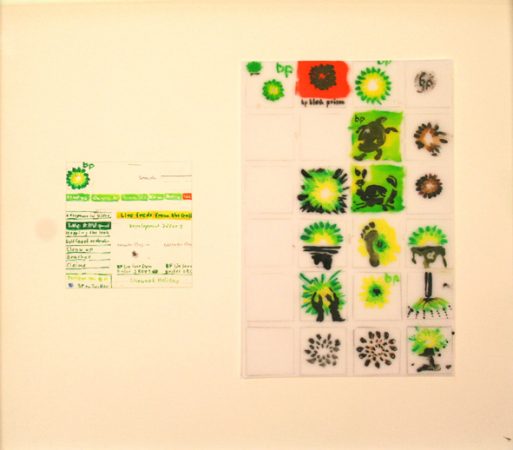 The history painter Dierk Schmidt (born 1965) studied at the Düsseldorf Art Academy and at the Rijksakademie van beeldende kunsten in Amsterdam. He participated in group exhibitions at the Witte de With, Rotterdam (2005), the Hamburger Kunstverein (2007), the Kunsthaus Dresden (2009), the 3rd Berlin Biennale (2004), documenta 12 (2007), Trienal de Luanda (2007) and the 1st Brussels Biennial (2008), among others. His first comprehensive solo exhibition was presented at the Frankfurter Kunstverein in 2011. The main work produced especially for this exhibition was a room installation entitled “IMAGE LEAKS – Zur Bildpolitik der Ressource”. Its subject matter was the oil disaster in the Gulf of Mexico in 2010 triggered by an exploded BP oil rig and the resulting war of images: BP’s failed crisis management and media work was accompanied for months by furious protests and campaigns to tarnish the company’s image. Dierk Schmidt drew a chronology of the events in the form of paintings on the illuminated ceiling of the Frankfurter Kunstverein, resulting in a history painting that could actually only be viewed lying down, measuring around 100 square meters. The edition “Image Leaks (sketch)” published for the exhibition is a sketch of the room installation that was later executed.