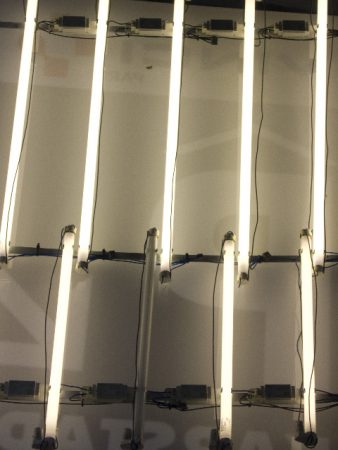 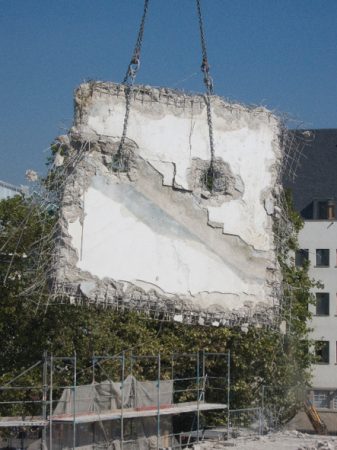 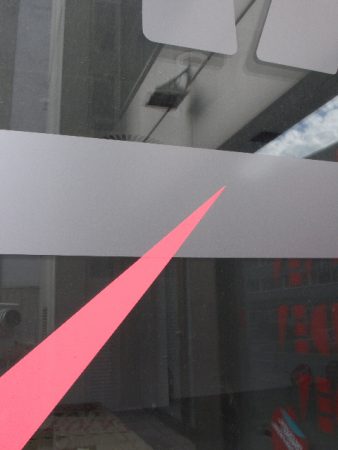 Oliver Godow (born 1970 in Lübeck) has lived and worked for many years in Berlin, Stuttgart and London. He studied photography at Bournemouth & Poole College of Art and at the Glasgow School of Art. He received numerous scholarships and his work has been shown in various solo and group exhibitions, including the New York Photofestival. One of the three motifs in his edition, created during an artist residency at the Frankfurter Kunstverein, shows a piece of a wall being carried through the air by a crane. It is the remains of a staircase of the Technical City Hall, which until 2010 stood in the immediate vicinity of the Frankfurter Kunstverein. At the time of the demolition, which Godow documents here, the former staircase exists only as a trace, as a reminder of a time of modern departure. A grid becomes visible that symbolizes modernism’s love of grids, quasi forming its matrix. Today, the pre-war old town will be rebuilt in the vacated area of the former Technical Town Hall. Modern building methods are used to rebuild the past and to satisfy a need for historical self-location. Oliver Godow not only demonstrates the transience of the future-oriented modernity, but also the longing for an escape from this very modernity into a restored past.