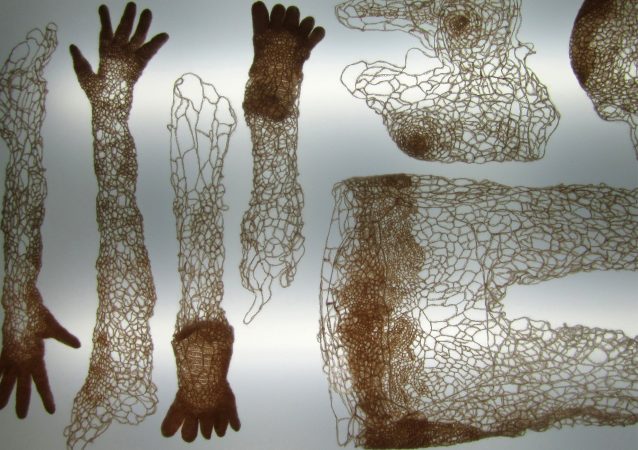 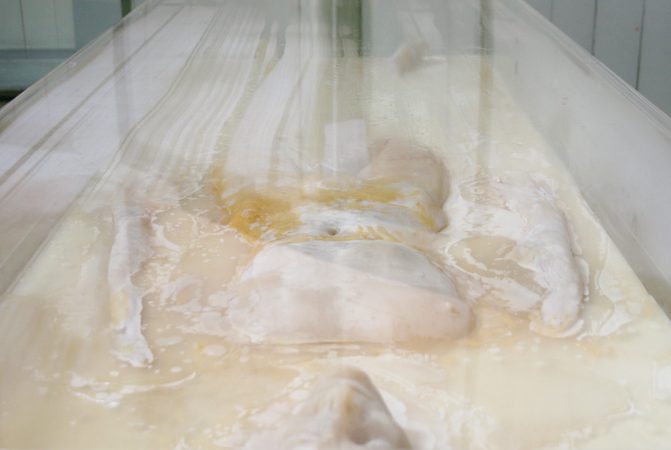 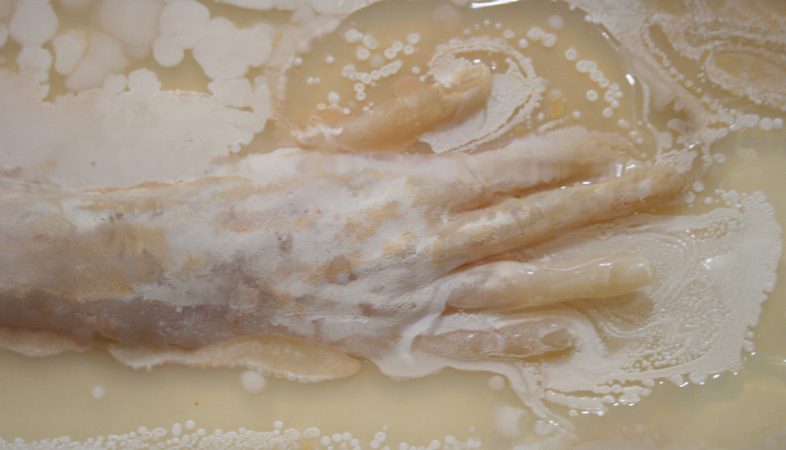 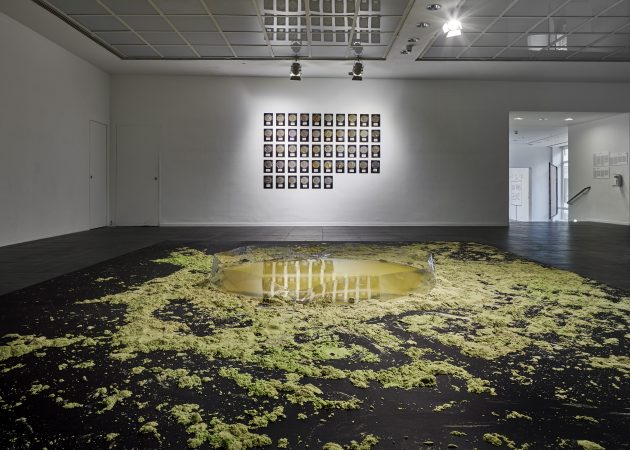 Sonja Bäumel’s work draws on a critique of so-called human exceptionalism—the privileged position of humans—and calls it into question. Her work examines the mutual relationship between the human body and the microorganisms with which it coexists. Bäumel has been exploring human skin as an interface between the individual and the outside world in her work since 2008. She works with the molecular biologist Manuel Selg and the bacteriograph Erich Schopf and uses various laboratory techniques to create living exhibits.

Bäumel’s work emerges against the backdrop of current scientific discourses, which challenge the basic assumption that an organism is an entity separated from its environment by its skin. Ever since the widespread availability of genomic methods in biological research, scientists are beginning to break away from the idea of the body as an individual and hermetic entity. Her artistic research deals with current bioscientific topics: the human microbiome, as well as the related development from genomics to metagenomics and the changing conception of what the human body consists of. Numerous recent scientific observations indicate that the construct we have considered as a biological entity must instead be interpreted as a dynamic and interactive fusion of many living organisms and processes. In the case of humans, it is estimated that 50% of the human body consists of other microorganisms, so that humans are the lesser share of themselves. The idea of the individual as a single entity is thus replaced with that of a meta-organism.

A comprehensive retrospective was conceived with the artist for the exhibition at the Frankfurter Kunstverein, in which several of her works are presented that place the human body at the center of her artistic research and practice.

The project “Crocheted Membrane” marks the beginnings of Sonja Bäumel’s research on skin bacteria and is part of the series (In)visible Membrane. As part of a research visit to Wageningen University & Research in the Netherlands, where Sonja Bäumel was introduced to the basics of microbiology, she experimented with skin bacteria and their reactions to textiles. Since then, her artistic practice has been shaped amongst others by collaboration with scientists.

“Crocheted Membrane” translates scientific data into wool thread through the manual practice of crochet. The seven objects illustrate, through their thickness, the locations where the body’s energy and heat requirements are greatest at an outdoor temperature of 10°C. What if we could use the bacteria that live on our skin anyway to build up a layer? This project visualizes how the form and function of a garment fundamentally transformed when one focuses on the individual body with its body needs (temperature) as a starting point.The artist thus creates a visualization that presents the organ of the skin as a layer of the organism separating interior and exterior. Bäumel’s net-like structures portray a consolidation, a visual metaphor for the vulnerable points of the human body.

The idea of ​​the body led Bäumel from 2012 onwards to the series “Expanded Self”, where she makes use of scientific practices and living material. She henceforth works with bacteria from her own body. “Expanded Self” is the result of several days work and thanks to the collaboration with the bacteriograph Erich Schopf. Bäumel uses her own body as a medium. Using laboratory techniques, she removes all the living organisms that have settled on her skin on a particular day. Over a period of time, the microorganisms grow on the nutritive substrate and a living trace develops; a snapshot of the invisible configuration of symbiotic life on the artist’s body. The microbiological organisms are part of vital functions, thanks to which, for example, the skin can develop its defense mechanisms as a protective layer. In the sealed environment, like in a display cabinet, it becomes possible to observe cell growth over the duration of the exhibition. The artist’s body leaves behind its unique microbiological imprint, which evolves as a living image.

Where analogies arise from a formal perspective with Yves Klein’s blue body prints, his anthropometries, or the historical exhibit of the Sudarium Christi, Bäumel’s work pursues a different intention. Bäumel’s art renders visible a reality that we have a notion of, but do not perceive in everyday life. The organism constantly ingests matter and microorganisms and simultaneously emits its own. Bäumel focuses on interrogating the body as a hermetic entity and our understanding of it. She searches for a new and expanded image of identity against the backdrop of the scientific knowledge of the twenty-first century.

With “Expanded Self II” Bäumel transforms her work into a three-dimensional form. She uses a three-dimensional cast of her body as the carrier of the living exhibit. To realize this work at the Frankfurter Kunstverein, she invited the molecular biologist Manuel Selg from the Fachhochschule Wels to collaborate with her. The material with which this work is created is the artist’s own specific skin flora with its composition of permanent and temporary microorganisms of a given day. In their temporal and local specificity they are applied to a carrier. Through a process the image emerges, a portrait of the artist from the matter of her own person. The human body is absent, its symbiotic trace drawing a new image through its autonomous life.

What drives Bäumel’s work is the question of the self. The skin is an organ populated by microorganisms that does not form a sharp distinction between interior and exterior, but rather a permeable membrane that surrounds the body and serves as an interface between the body and the outside world. Based on this, Bäumel creates a second living layer, which simultaneously becomes a membrane and a metaphor for the symbiotic ecosystem of all living things.

The question of what constitutes our own body is always in the foreground in Bäumel’s work. She creates images of her body that can be understood as a living biotope, a hybrid, and a symbiotic ecosystem.

with Doris Uhlich and Andrius Mulokas

*Part of the project “What would a microbe say?” (2017–2020), a collaboration between Sonja Bäumel & Helen Blackwell (a professor of chemistry at the University of Wisconsin-Madison, USA)

In the exhibition space, visitors will find traces of the performance “Microbial Entanglement”, carried out on the evening of the opening. This is a newly developed work for the Frankfurter Kunstverein by Sonja Bäumel in collaboration with Doris Uhlich, a choreographer and performance artist, and Andrius Mulokas, a performance artist and dancer. In the performance, three performers lie naked in a manufactured Petri dish. They break out and move freely around the exhibition space; materials such as kinetic sand and methylcellulose are distributed throughout the space, contaminating the bodies.

After the end of the performance, the resulting material landscape will remain as part of the exhibition.

In science, in vitro refers to experiments conducted in a controlled artificial environment outside of a living organism, such as in a Petri dish. The performance may be indicating that a living being can not be reduced to its DNA, and its research into social relationships calls for an artistic and philosophical extension of scientific tools, among other things.

How can a performance facilitate a radically new look at biological rules, hierarchies, dimensions, and benchmarks?

The microbes we are dependent on for our survival connect us to surrounding bodies, whether they are visible or invisible. They dissolve the boundaries between species and demonstrate as yet unexplored forms of intelligence and communication. How can we approach the world of microbes, of the microbial ecosystem that unites humans, animals, plants, and objects? What if we found ways to make the microbial body tangible; ways that invite us to experience and therefore better understand what the microbial paradigm shift means for concepts of autonomy and the limits of the self. It could create an environment that allows us to know, but at the same time to wonder, feel, touch, empathize, and thus understand what it means to be human today.

Donna Haraway emphasizes the ethical aspect that coexistence is not without risk. It is not a romantic or sentimental notion of being together, but rather about taking risks to find the courage to open up to that which is different, to that which is not the same as us. To allow uncertainty, confusion, and ignorance as the basis for our actions in the world. The endeavor is to make ourselves vulnerable in our explorations of our material relationships with what is inherently alien to us and yet so close.(1)

With this performative work, Bäumel draws on principles of biological cooperation models in order to transform them metaphorically. She negotiates phenomena here such as quorum sensing, a field of research investigating the communication systems between bacteria. They coordinate activities such as their growth and their structural formation as a group via electrochemical processes. The term quorum comes from the political form of the Roman Senate and describes the process in which a collective must come to a decision through negotiation.

Current research focuses on the analysis of competitive and cooperative behavior within heterogeneous bacterial communities, which, in the transmission of scientific knowledge, also makes this interesting from the perspective of the humanities and social sciences. The increasing understanding of symbiotic systems is proving to be a paradigmatic revolution in which the entire traditional concept of the individual as a monad or an island (insular individuality) is called into question. The biological species concept is also currently experiencing a fundamental reconsideration. For both concepts, as well as those of the “species” and the “individual,” the distinctions of what it means to be a “self” are becoming increasingly blurred, even though everything indicates that the processual exchange and constant interaction between living organisms and things determines the essence of all that is living.

Sonja Bäumel studied fashion design at the University of Applied Arts Vienna. She received a Bachelor of Arts degree at the University of Art Linz and a Magistra Artium (MA) degree in Conceptual Design from the Design Academy Eindhoven. For her project “Textile Anatomy” she received the “outstanding artist award for experimental design” in 2012 from the BMUKK Bundesministerium für Bildung, Kunst und Kultur Wien.