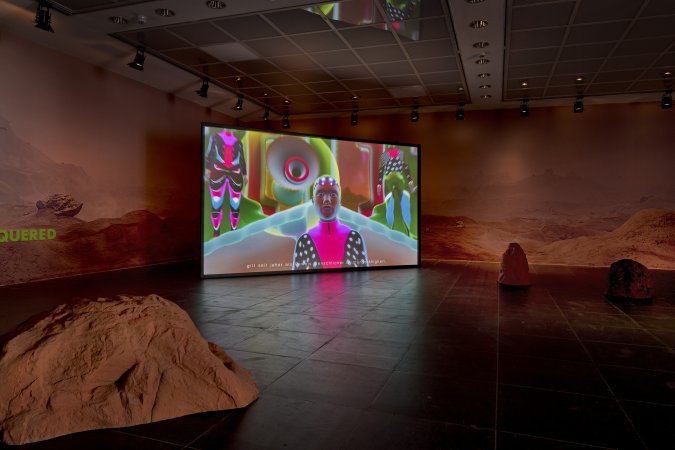 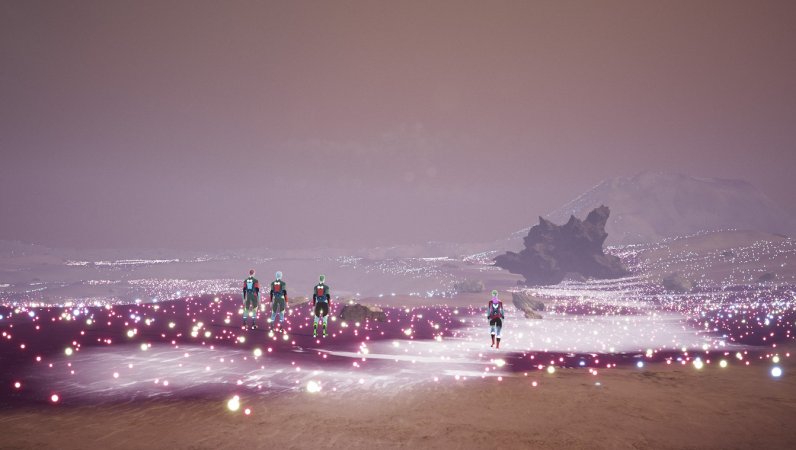 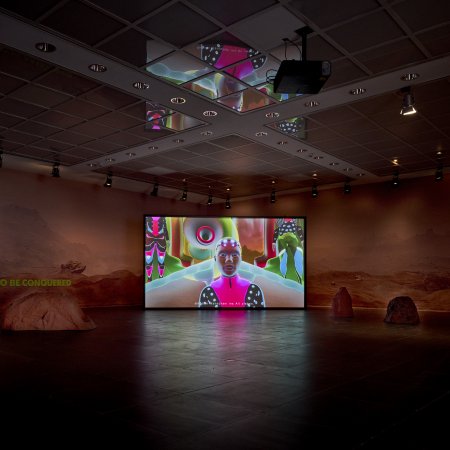 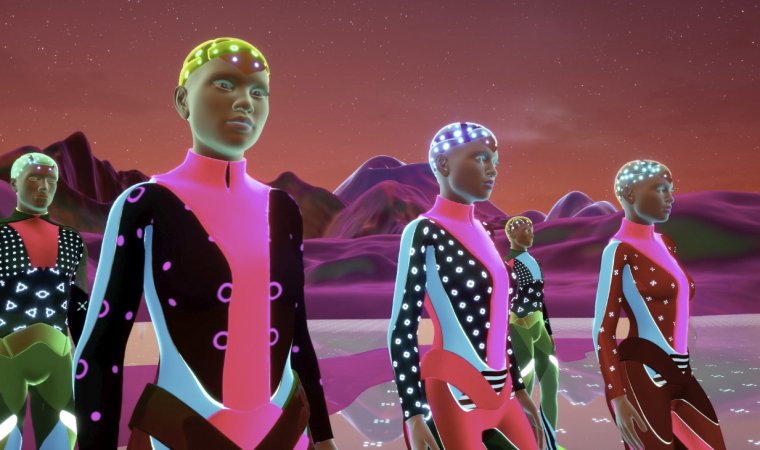 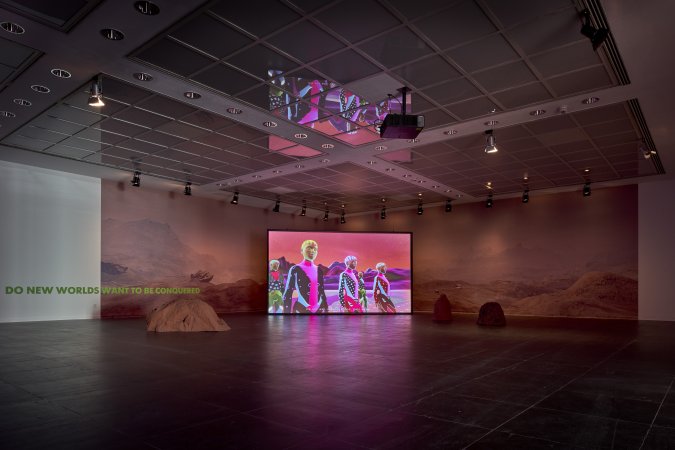 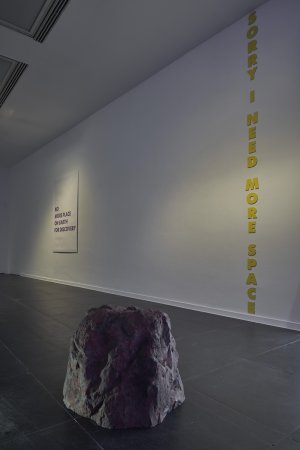 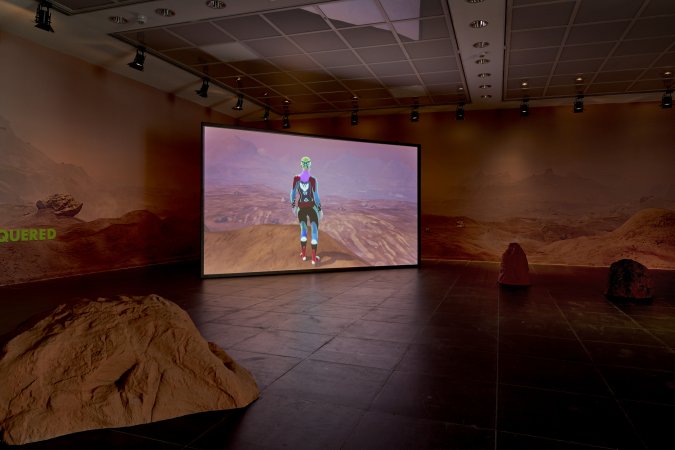 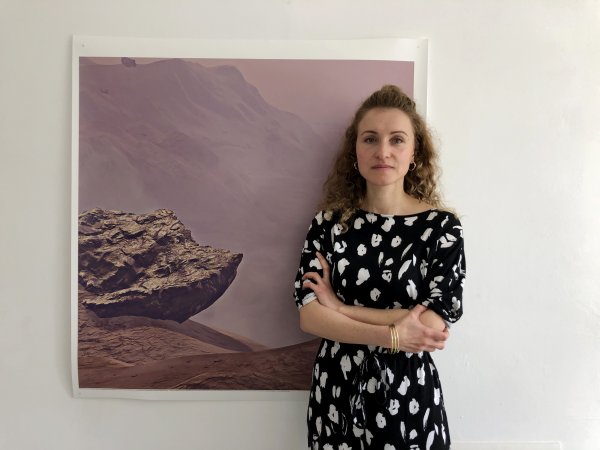 Yurval is the title of Valentina Knežević’s work. The word Yurval is made up of the names of the first two cosmonauts Yuri Gargarin and Valentina Tereshkova. The artist grew up hearing that she was named after this first female astronaut. Knežević’s video work is a science fiction narrative that developed in collaboration with graphic designers, scientists and filmmakers. Knežević works with the means of digital animation, which she developed together with digital graphic artist Lidija Kljakovic. The voice-over in the film belongs to satellite data engineer Nikolina Govedarica.

The animated film imagines a future scenario of the human species in search of new expanses. In the artist’s vision, humans have evolved as Homo Nano Sapiens and are searching for new habitats in outer space. She explores the idea of the end of history, in which the Earth is no longer the place where utopias and human longings are realised. The evolution of man through the development of machines has also been overcome and biological matter has merged with technological matter to form a super-organism.

The theme of the primordial human urge to discover and conquer new spaces determines Knežević’s work. In her film, the artist argues that the earth has been fully explored and studied and that there is no further history to be written on this planet. The imaginary space for new utopias is thus exhausted and all visions for a reinvention of humanity are projected into space. Future humanity now strives to continue its history in space.

The work Yurval comes at a historic moment when the United Arab Emirates, China and the United States of America have each launched separate missions to Mars. Through Nasa’s Perseverance rover landing on the red planet and the Mars helicopter Ingenuity, humanity has obtained the first high-resolution images of an unknown landscape that has fuelled the imagination of mankind for centuries.

Knežević poses the question of what future humanity will have when planet Earth is destroyed and parts of humanity have left it. What will a society look like that has to make a new start on a distant planet? Will it repeat the same mistakes it is trying to escape? Will social inequality, racism, intolerance, poverty and war be overcome?

With her work, Knežević relates to utopian projections of a humanity that asks about the nature of being human in the age of the Post-Anthropocene. Her film raises questions about the fate of humanity, which, despite the eternal search for new spaces, will ultimately always be thrown back on itself and only recognise itself in the distant and unknown.

Valentina Knežević (*Split, YU) is a video artist living and working in Frankfurt am Main (DE). In 2019 she graduated from the Frankfurt Art Academy Städelschule (DE) as a master-class student of Douglas Gordon. Previously, she studied theater, film and media studies at the Goethe-University in Frankfurt am Main (DE). In 2020 she won the working scholarship of the Hessian Cultural Foundation. Among others, Valentina Knežević has exhibited at the following institutions: 45cbm, Kunsthalle Baden Baden, Baden Baden (DE), Palazzo Strozzi, Florence (IT), Museum Angewandte Kunst, Frankfurt am Main (DE), Palais de Tokyo, Paris (FR), Bangkok Biennale, Bangkok (TH).