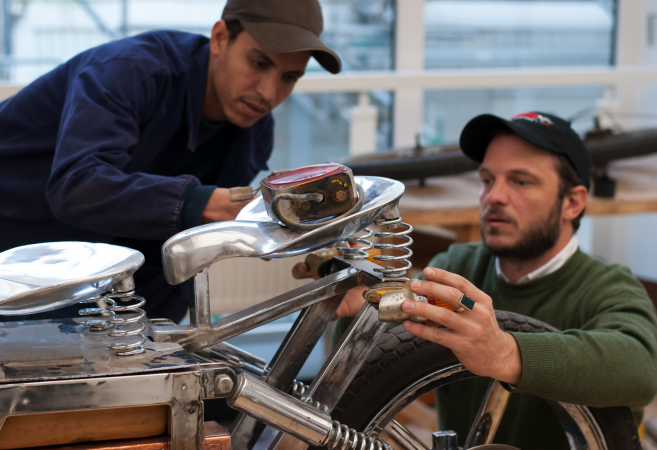 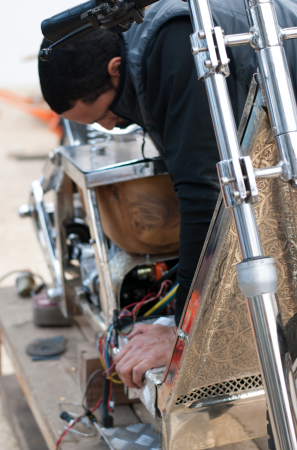 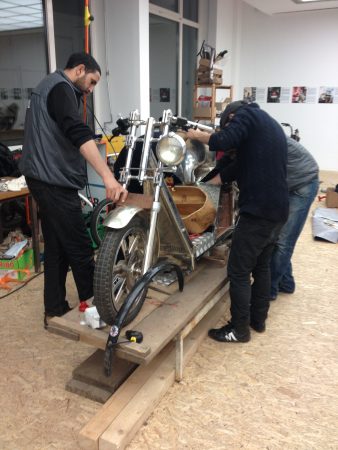 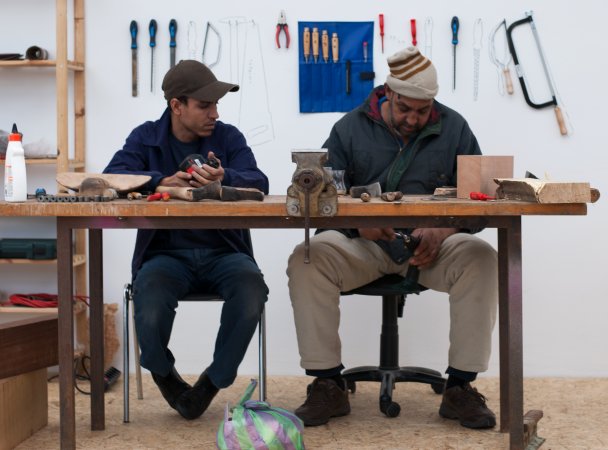 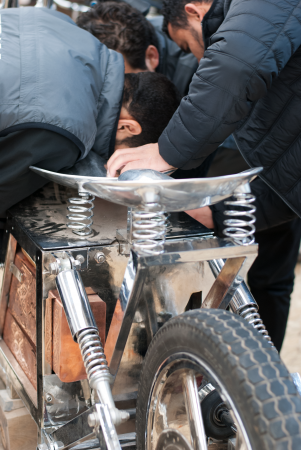 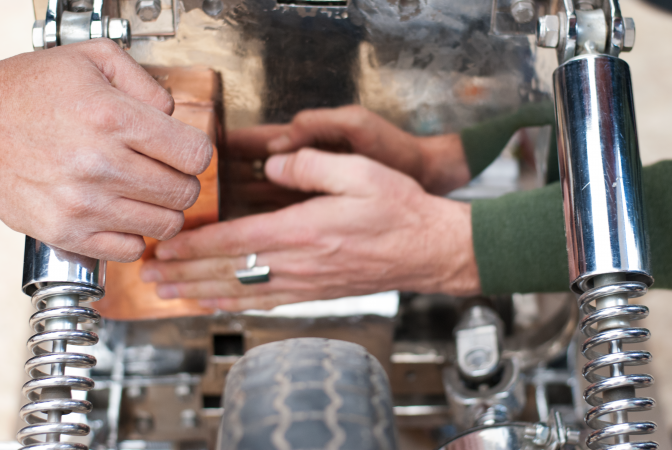 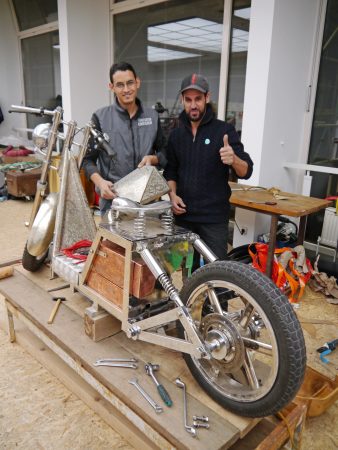 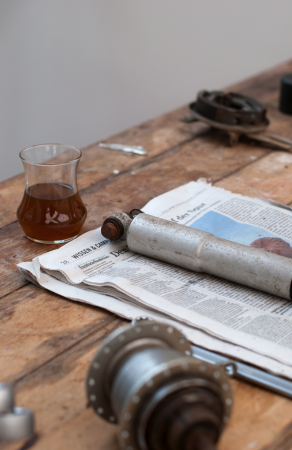 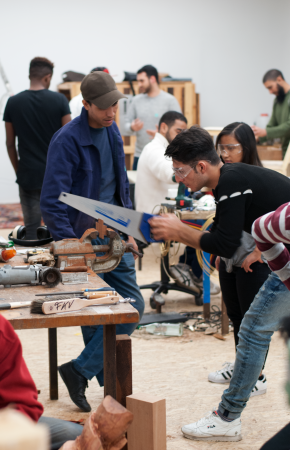 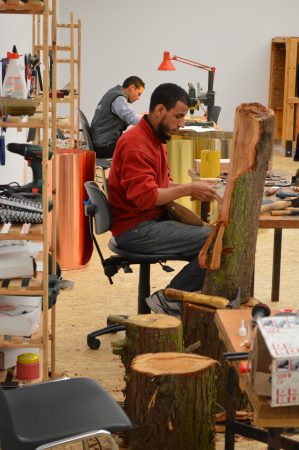 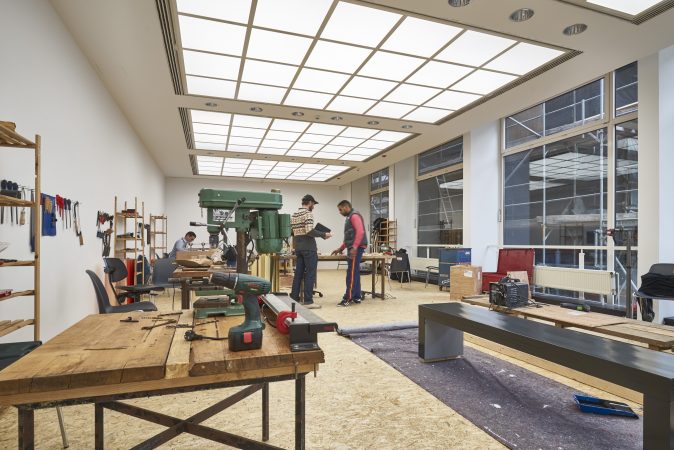 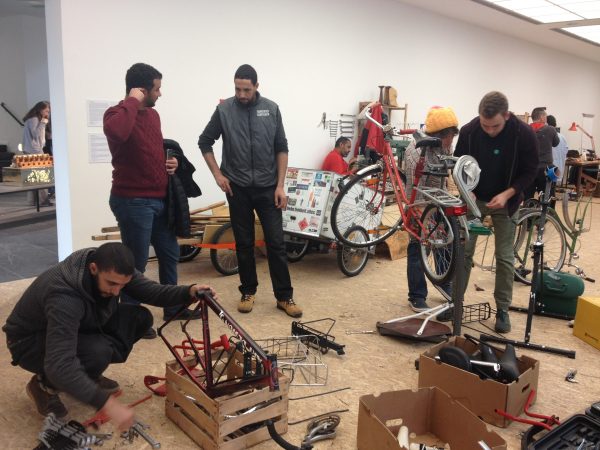 The workshop bicycle self-help by Matemobil at the Open Workshop, 2016, ©Frankfurter Kunstverein 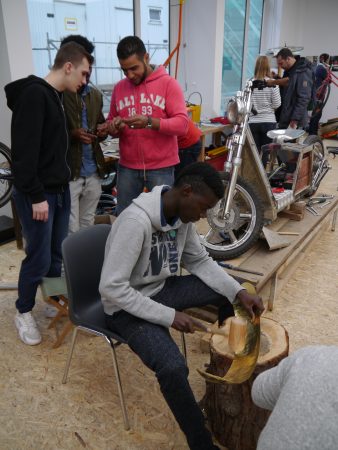 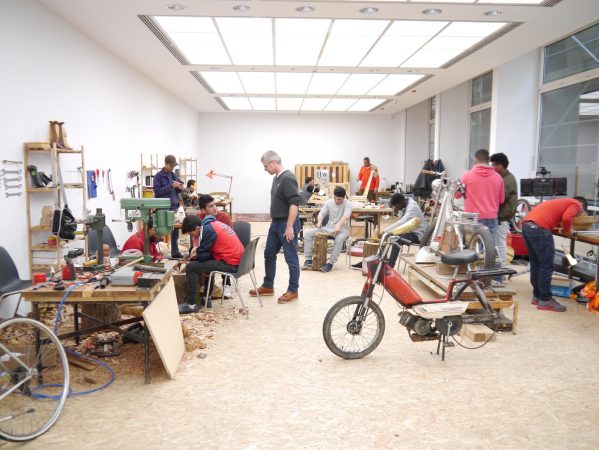 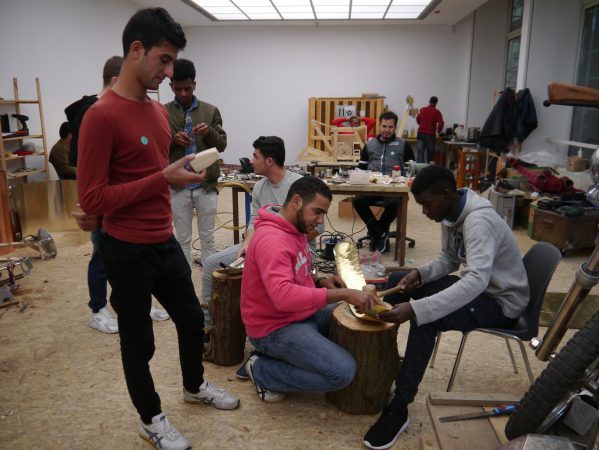 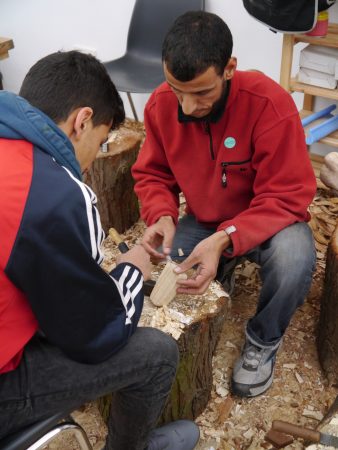 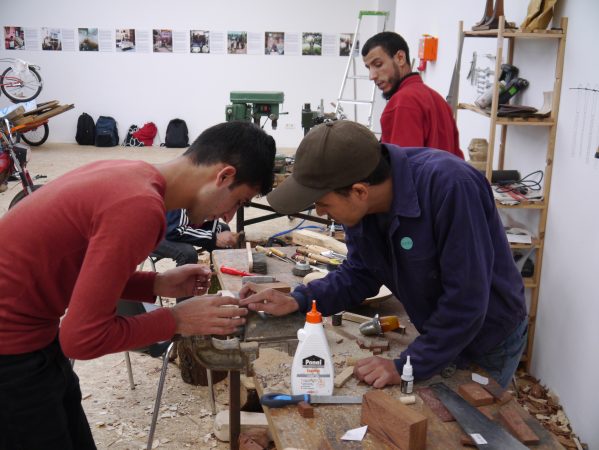 From 11 – 20 November 2016, the Atelier van Hove from Marrakesh moved into the Frankfurter Kunstverein. The artist and his team of ten highly specialised artisans and mechanics invited visitors, as well as local project groups and initiatives from the fields of craftsmanship, design and engineering to participate. Initially, Moroccan craftsmen worked at the workshop in collaboration with locals. From the end of November until February, local groups continued their work autonomously. At Frankfurter Kunstverein Eric van Hove’s concept of an open workshop as socioeconomic sculpture became manifest, thus referring to issues of distributed authorship and participation, as well as of possible forms of solidary and alternative economies.

The starting point for all workshop activities was the objects and mechanic sculptures developed and realised by the artist. Local groups then assumed the realisation of their own projects, which were connected to van Hove’s themes. These included issues like the connection between traditional handicraft and current modes of production, the critical assessment of goods cycles and sustainable economies, and the future of labour and collaboration as social connector.

The exhibition space at Frankfurter Kunstverein was transformed into a vivid production site, into a workshop for bicycles and motorbikes, into a training place for apprentices and vocational students, into a manufactory for furniture. Against the backdrop of the participants’ specific abilities, skills and ambitions, the workshop served as a place of encounter. Central were both the interdisciplinary and intercultural exchange and the contact between local groups, the artist and his employees.

The Mahjouba Lab also took place at the Open Workshop. As part of two workshops that catered to issues of e-mobility and 3D-printing, and during weekly meetings, experts and enthusiasts of craftsmanship, design and engineering reworked prototypes from the Mahjouba-series for the context of the Rhein-Main region. Their aim was to design and build Mahjouba Version Frankfurt using local resources and focusing on the needs of Frankfurt’s users.

Interested groups were invited to use the workshop according to an individual arrangement. Single visitors could show up spontanously.

Headed by Felix Titzka, the Seckbach-based training workshop URSPRUNG introduces craftsmanship and engineering to vocational students from Frankfurt. Here they can explore new professions and learn various manual skills. At the open workshop, this group worked on the functional Peugeot 103 Model URSPRUNG, which was inspired by Eric van Hove’s Mahjouba I.

Bockenheim initiative Matemobil stands for a change in urban thinking and post-fossil cargo bicycles, which they lend to Frankfurt citizens free of charge. For the course of the exhibition, the team at Matemobil moved their bicycle self-help workshop to Frankfurter Kunstverein, conducted a weekly Open Workshop and, along with Eric van Hove, organised the workshop Mahjouba Lab: E-Mobility from November 18 – 20, 2016.

At the open workshop adolescents from the promotional programmes BvB, PerjuF and Wirtschaft integriert were brought together by social worker Fatih Özsoy from Bildungswerk der Hessischen Wirtschaft e.V. (training institute of the Hessian economy). The programs supported local young people, both with and without immigration backgrounds, with professional qualifications. Together, the participants worked on musical instruments and individual projects.

MakerSpace Wiesbaden is an open workshop where members can use machinery and tools like a 3D printer, a CNC milling machine, wooden tools or a laser cutter. Alexandra Meschede represented MakerSpace Wiesbaden at Frankfurter Kunstverein. Together with youths from Frankfurt she fabricated furniture for their club house in Wiesbaden. 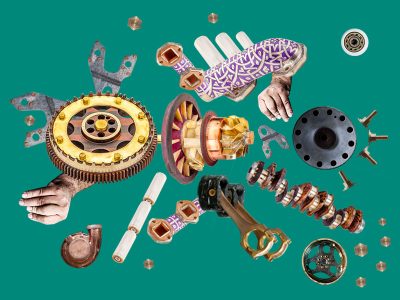