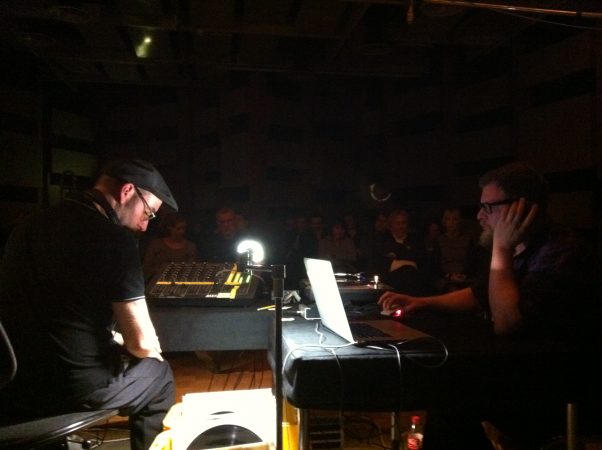 In their project “voiceoverhead” Dani Gal and Achim Lengerer performed with DJ consoles in front of the audience to create a new “text” from documentary material of public speeches, political state-ments and other original soundtracks of our times. The performance project could be experienced live at Hörspielstudio 7, Hessischer Rundfunk (HR) and has also be aired on HR2-Kultur’s program “The Artist’s Corner” starting at 11:05 pm. As a sound installation, “voiceoverhead” has been part of the exhibition “Demonstrations. Making Normative Orders” at the Frankfurter Kunstverein in January 2012.

In their joint artistic practice, Gal and Lengerer have been interested in audio acoustics and the media employed in archiving sound since 2005. The concept of “voiceoverhead” is based on Gal’s collection of audio records comprising around 350 recordings of political speeches and language-based radio programs. The artists dissect and combine these “historical documents” along political and esthetic lines live in front of the audience using a DJ console, and they do so in such a way that the result is a new type of textuality and sound weave in its own right. The live performance will take place at Hessischer Rundfunk’s Hörspielstudio 7, whose building would have housed the chamber of the German Bundestag (parliament), had not Bonn won the bid to become the capital of the FRG in 1949. Thus, Gal and Lengerer returned to one of the places where their audio material originated, while also using a medium that is important to the public discourse and to opinion making.