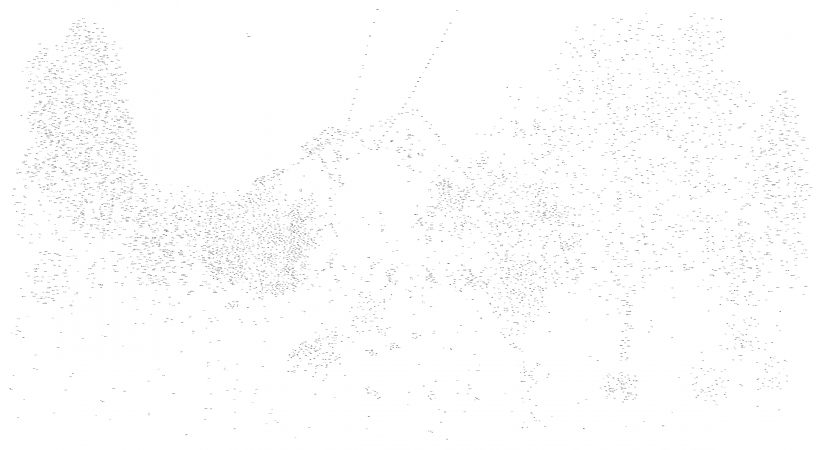 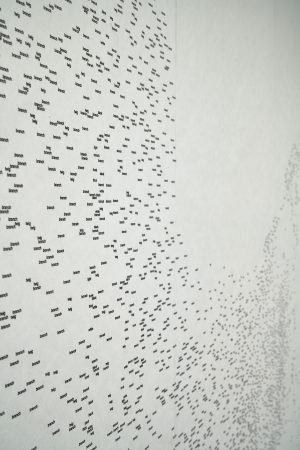 As starting point for the work House served a photograph taken by Noomi Ljungdell. It shows a house in winter: lined with spruces, the ground is covered in snow and gravel. The artist deconstructed the image into individual elements. She then titled every fragment with a term. The letters of each word taken together then form an image that resembles the original motif – a house in a winter landscape.

Ljungell uses the functional principal of machine learning. This approach divides the image into fragments in order to organise them in relation to terms. Abstraction and generalization are thus the basis of algorithmic processes. In House the specific, subjectively loaded motif is transformed into something general and universal. Variable aspects such as the specific state of the house, the weather, and lighting conditions – time, so to speak – have been deleted from the image. The specific house becomes a general superordinate term like “a house” or just simply “house.” Seen close up, the image dissolves into letters and words, and subsequently the abstract idea of an object. From a distance, however, the landscape with house can still be recognised. Depth relations have been constructed into the surface. With the help of a viewer’s imagination, the terms can be translated back into a subjective scenery. Only imagination can synthesise the image motif and perhaps even its specific atmosphere.

Though a human observer may consider Ljungdell’s abstraction a deliberate interpretation, this is irrelevant for the process of digital data capture as it represents the standard procedure. What is a house for a machine? How much understanding can an intelligent machine have about a physical object when it lacks any bodily relationship to it? It seems evident that deeper intelligence is connected with matter and a physical body, which can experience itself in an environment as well as the effects of its behaviour on its surroundings.

Finnish photographer and conceptional artist Noomi Ljungdell (b. 1979) graduated in Photography at the University of Arts and Design in Helsinki (FI), where she lives and works.