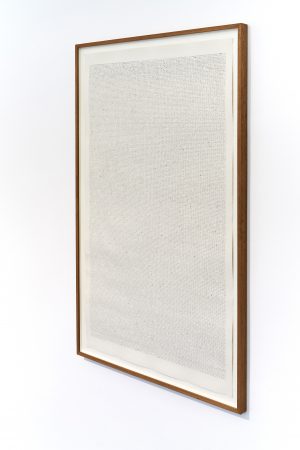 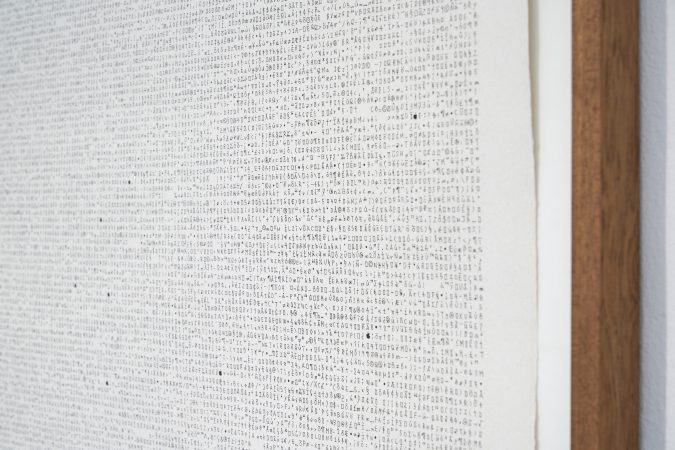 The drawing Self_portrait.jpg consists of 58,806 text characters. These have been manually transferred onto fine Japanese paper with ink. The letters, numbers, and special characters (ASCII-Code) represent an image in jpg format. When the digital equivalent of these characters are read by a computer, they produce a self-portrait of the artist. JPEG is an ISO standard, which prescribes various compression and coding methods for images. Specific pixels of image data are usually deleted in the process in order to reduce the total file size. With limited compression, this loss of data can hardly be identified by the human eye. With greater compression, the loss of data becomes visible.

In the case of a portrait, especially an artistic one, the challenge is to adequately capture the essential traits of the person being portrayed. These aren’t just determined by a person’s outer appearance, but also their gestures and idiosyncrasies. What information did Yunchul Kim use for his reproduction in jpg format when he manually transcribed the data? Can humans and machines perceive and process the same qualities in information, and if no, which selection criteria does a human use? Is the information we humans perceive of any relevance to automated processing?

For a computer, the jpg file of Kim’s portrait isn’t received as an image, but rather as a binary sequence of 0s and 1s. Could there be an analogy between the memory format of a human brain and an automated system since both need to convert physical impressions into storable information? Countless sensory impressions are transformed into electrochemical impulses of varying frequencies in our brain, regardless of whether the perceived phenomenon is an image, sound, or any other sense data (undifferentiated coding). They are coded, compressed and transformed into molecules in order to be stored as memories in the brain. Could the self-portrait here also be an attempt to show a self-portrait on the level of a cerebral representation of one’s own image?

Media artist and composer Yunchul Kim (b. 1970), who lives in Berlin and Seoul, studied electronic music at Chugye University for the Arts, Seoul (KR) and audiovisual art at the Academy of Media Arts in Cologne (DE). His work was shown at Ars Electronica, Linz (AT), Transmediale, Berlin (DE), at the New York Digital Salon (US) and VIDA in Madrid (ES).