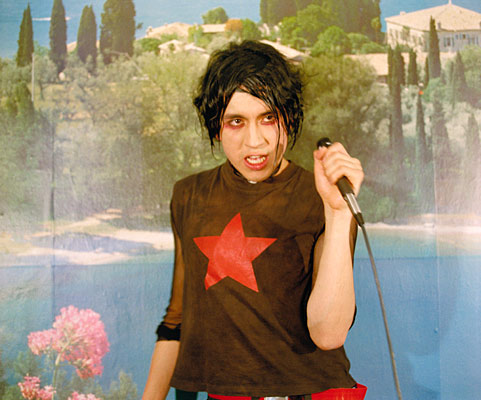 In connection with the “Saisonstart” of the Frankfurt galleries Frankfurter Kunstverein presents a special program: „Special: PHIL COLLINS in the Residency Room“

We will present the video installation dünya dinlemiyor (2005) by the British artist Phil Collins. This event takes place in connection with the Deutsche Börse Photograhy Prize. This year, Phil Collins was shortlisted for the prestigious Deutsche Börse Photography Prize, which is awarded every year by The Photographers’ Gallery in London. The prize aims to acknowledge today’s leading international photographers and to raise the profile of photography within the visual arts by acting as a focus for debate.

The work dünya dinlemiyor (2005), was made in Istanbul. The title means “the world won’t listen” and it shows young fans of the British band The Smiths performing karaoke versions of their favourite tracks of the eponymous Smiths album from 1987. With backing music recorded by local musicians, they are placed in front of colourful backdrops and videotaped by Collins. The work was filmed in one session and only edited minimally, allowing the viewer to follow both the alternately touching, disturbing and awkward moments of the performances and the intimacy created between participants in the situation where they are both performers and audience. dünya dinlemiyor is the second part of a trilogy, whose first part was made in 2004 in Bogotá, and whose third part will be produced in an as yet unidentified place this year. This international export and appropriation of an album that originally was made in a very specific context, shows the power of pop music to transcend borders, cultural and linguistic, but also the ability of the young fans to insert the songs into their own immediate experience. Phil Collins is one of the nominated artists of this year’s edition of the prestigious Turner Prize.

This work, as well as the work of the winner of the Deutsche Börse Photography Prize, Robert Adams, and the two other shortlisted, Yto Barrada and Alec Soth, will be on show September 7 – October 22 at the Neue Börse, Deutsche Börse’s headquarters in Frankfurt-Hausen.

And This is Us 2023 – Junge Kunst aus Frankfurt